By Ekeaba7 (self media writer) | 2 years ago 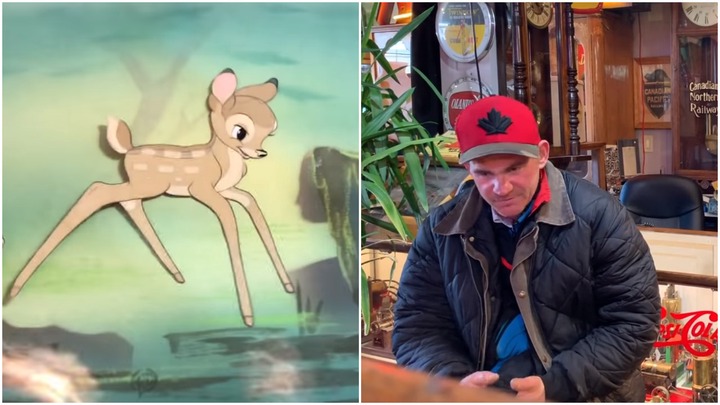 For store owner Alex Archbold, Adam Gillian was a familiar and welcome face in his store. Homeless and always on the hunt for unique treasures to sell in order to keep a warm meal in his belly, Gillian frequently did business with Archbold at his store in Edmonton, Canada.

However, when Gillian brought in a rare Disney print and sold it to Archbold, he later discovered it was extremely special. This story is one of an accidental find and how it changed one kind man’s life forever.

Homelessness is an epidemic that is far reaching. While we see homeless people in abundance here in the United States, other parts of the world are dealing with a large portion of their country’s populations winding up on the streets. Being homeless can be a degrading experience. You can lose your sense of self and as months turn to years, hope slowly begins to fade.

Being homeless in the winter is especially hard and in Edmonton, Canada it can be absolutely miserable. The frigid temperatures make living on the streets nearly impossible and with a lack of shelters to rest, being homeless can turn into a hunt for warmth.

For Gillian, living on the streets had become a way of life, but it wasn’t always that way. He had originally moved from Stratford, Ontario to be with family. Taking a job working in drywall, things were beginning to look up. Sadly, after his life took a hard turn, he lost his job and things seem to unravel quickly.

With the loss of his job and finances dwindling, Gillian’s life began to slowly dismantle. He battled with depression and he would lose his three children to foster care. Soon, he could no longer afford the mortgage on his home. Gillian didn’t think things could get any worse…then they did.

In the end, Gillian found himself living on the streets. Sometimes he would crash with friends or find a 24-hour restaurant to keep warm, but ultimately he would find himself lost and alone. Weeks turned to months and before long Gillian had lived three years on the streets.

One thing homeless men and women have in common is they are desperate for money. Whether they are trying to earn enough for a hot meal or a warm bed for the night, cash can be really hard to come by. Realizing panhandling was getting him nowhere, Gillian decided to try a different tactic.

Gillian began to dumpster dive, also known as “binning.” The process of dumpster diving basically involved searching through dumpsters and people’s trash for items of value. Gillian would then take these items to pawn shops and places he could trade them for cash.

Dumpster diving is actually fairly common among the homeless community. It is a means to an end and sometimes provides a nice financial boost. Gillian would hunt through dumpsters with his street friends and they would divide the earnings on good days. While it wasn’t the best job in the world, it was a way to keep his head above water in these hard times.

While the proceeds from dumpster diving weren’t enough to live off of, it did make the difference between going hungry and affording a hot meal. And during the winter, the opportunity to eat something hot was a rare treat.

Despite it being a hard life, this was how Gillian spent three years trying to get by. He relied on good fortune and his keen eye to spot valuables in the trash. This hobby led him to Curiosity, Inc., an antique store where he could sell his goods.

As time went on, Gillian became good friends with the workers in the store. They always enjoyed doing business with him and could always rely on him to bring in some rare finds.

And one day, Gillian brought in an item that truly was a remarkable discovery.

It would be during one of Gillian’s routine hunts that he would stumble upon an old print from the Disney film Bambi. It was in excellent condition, framed and featured the classic hand-drawn animation from the past. Plus, who doesn’t love the story of the little fawn who grew up to be King of the Forest?

Gillian was thrilled when he discovered the print, hoping it would make him enough for a hot meal at the local diner. He knew the film was a beloved classic. It had been a huge hit when it released in 1942. What makes the story even more special is it was based on a classic novel.

Written by Felix Salten, “Bambi: A Life in the Woods” touched Walt Disney’s heart when he read it. It was one of the first films he wanted to make originally, but he had to wait for the technology to pull it off the right way. The love and devotion surrounding this film, has made Bambi collectibles quite valuable.

Gillian was excited about his find and went to several different stores hoping to make a sale. Sadly, no one seemed interested. Thankfully, Gillian decided to stop in at Curiosity, Inc to see if his buddies might be interested in giving him a few dollars for it.

Alex Archbold was the owner of Curiosity, Inc and knew Gillian well. A self-described entrepreneur and antique dealer, he kept weekly video updates of his rare finds on YouTube. He also loved to go on adventures to new places and document the experiences.

According to Archbold, Gillian always had a keen eye for rare finds. He was also a delight to deal with and could always strike up a great conversation. Therefore, when he came in on that cold, winter day he was curious to see what he had found.

Archbold took great pride in his store and loved to show it off on his Instagram. An eclectic mix of antiques from video games to magazines, you could find anything and everything in this oddball store.

Archbold was immediately intrigued by the Bambi print and offered Gillian $20, which he happily accepted.  “I thought, ‘Well, it’s Bambi, I can probably clean it up,’” the entrepreneur recalled.

After Gillian went on his way, Archbold decided to remove the frame from the print to examine it. Much to his surprise, he discovered a certificate of authenticity behind the picture. It seemed Gillian had found an actual piece of celluloid from the original film.

What made the print even rarer is the copyright was from 1937, which meant the artwork was created five years before the film was released. Immediately he placed it on eBay and was shocked when it sold for roughly $2800. Talk about an amazing profit!

After the print sold, Archbold didn’t feel it was fair to keep all of the money. Gillian deserved to get a portion of it. However, finding him could prove to be difficult. How could he possibly find one homeless man in all of Edmonton.

Archbold searched high and low, but there was no sign of Gillian anywhere. He searched the dumpsters and the camps that the homeless liked to frequent, but it seemed his treasure hunting friend had vanished. Then one day out of the blue, Gillian stopped into the store. Archbold wanted to surprise him with his share of the sale and set up a faux interview with Gillian the following day for his YouTube channel. Little did Gillian know his life was about to take a very drastic turn.

When Gillian arrived the next day, Archbold conducted his interview. At first, he asked about Gillian’s past, learning about his family and why he ended up on the streets. Then Archbold shifted to discussing Gillian’s dumpster diving and the treasures he has collected throughout the years.

When asking about some of his favorite finds, Gillian revealed that discarded jewelry was always a real treat to discover. He once found a $300 pocket watch from 1968 and on one occasion some silver quarters. It amazed Gillian all the things people threw away by accident or on purpose.

At this point in time, Archbold shifted the interview to the rare Bambi print. He informed Gillian he had sold it on eBay for more than he expected and wanted to give him his share of the sale. Handing the man an envelope, Gillian slowly opened it to find a stack of cash! “There is a little bit of money in there for you,” Archbold adds. “There’s $1,600 and 35 cents!”

To say Gillian was overwhelmed would be an understatement. Then Archbold revealed that he would like to set up a GoFundMe page for Gillian in an effort to help him get off of the streets. Gillian humbly accepted and the fundraiser reached over $18,000 much to his delight.

After posting Gillian’s story on YouTube, it soon went viral. During this time, Gillian’s family who had lost touch with him over the years reached out to Archbold. They hoped they could reunite with him and help get him off the streets.

Archbold immediately contacted Gillian who was thrilled. It seemed he would soon be getting his family back.

Archbold went with Gillian to the train station the day he was heading out to meet with his family after three years apart. Later, Archbold posted an update on Gillian with best wishes for his success in life. He stated: “Couldn’t be happier for the guy, couldn’t be happier for you, Gillian. And I hope you take advantage of this opportunity when you’re back home around your family and loved ones to put your best foot forward. Much love from our family and from our business to you and yours.”

We hope so too. Talk about getting a second chance at life.

Content created and supplied by: Ekeaba7 (via Opera News )