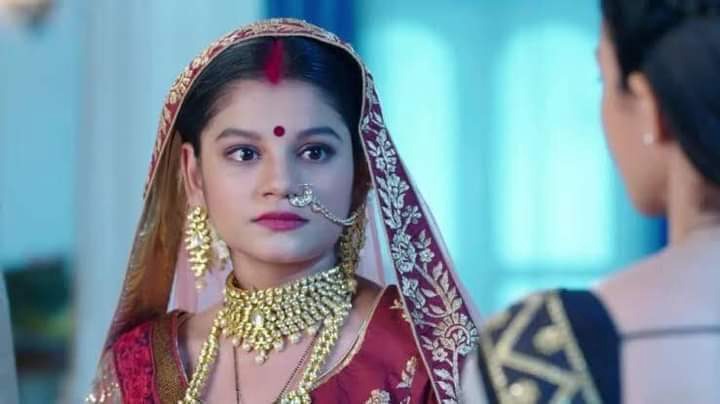 Vaidika tells Sahil she can’t let Aarya misbehave with her father. Sahil says Aarya is like her daughter, at least she is talking to him. He forbids Vaidika to take any stress and shuts the lights off for them to sleep. He turns to leave the bed, but Vaidika holds his hand.

He lays besides; both staring into each other’s eyes. Vaidika says Sahil would never know how much she loves him and calls herself extremely lucky. She then rests her head over his shoulder.

The next morning, Vaidika leaves the temple corner. Aarya comes from behind, does the Aarti and turns around to face a crying Vaidika. Vaidika stops her and asks why she is doing all this.

Her hatred has blinded her, she can’t see the truth. Aarya says she prayed for her husband and mother in law’s long life. Vaidika requests Aarya to calm herself down, she must think as a sensible girl Aarya if she really believes Sahil can do so.

She believed a stranger, and not her Mama and Papa. Aarya clarifies Sahil isn’t her father, he is only her husband. For her, he is only a criminal. She will punish him each day. He will suffer each day so much that it will become unbearable.

Vaidika replies she won’t let her insult her husband. Aarya questions what Vaidika can do for her young husband. She must pay a cost if she wants her to forgive Sahil Agarwal; and must leave Sahil Agarwal. She must let him realize it’s a fruit to his actions; she should hate him and make him realize how it feels when one loses one’s love.

She forbids Vaidika to share it with anyone in the family, even Sahil. Vaidika was silent. Aarya insults that she is so much in love with her young husband, so flirtatious and used to his romance that she can’t think of leaving him. Vaidika was about to slap her, but Sahil stops her hand and says daughters are never scolded or misbehaved with.

Prachi watches all the dust and filth in the hall. She wonders who did this. Nani tells her to call the servant and get it cleaned. Aarya comes downstairs with Shirtij and Neelam. She says there is no servant in the house anymore.

She sent them all home, as it’s her house. She has let them stay here; isn’t that enough? They shouldn’t forget they now live at her alms. Shruti agrees to do the cleaning, they did it in America themselves. Aarya says not them all. Sahil Agarwal will do the cleaning. Sahil came home and looks around. Aarya says he came at the right time.

Sahil takes Vaidika aside, he convince they are her parents and needs to deal with her. She has seen a lot in a mere twenty one years of age, they can’t let her go distant from them. He says it’s not Aarya, its Shirtij getting all this done. Aarya says wow, its great romance; but its better if Sahil focus on the cleaning.

Bari Amma comes to speak to Shirtij in the room. Shirtij was annoyed and didn’t want to speak. Neelam blames that Bimla never thought about her own son for years. Bari Amma says it’s not true, she knows how she lived without him all this time.

She requests Shirtij not to punish Sahil for all the complaints he has for her, she will give him anything he wish for. Whatever went wrong is because of that Vaidika. And this Aarya is crazy, who forgot what Sahil and Vaidika did to her. Neelam tells Bari Amma to end her emotional drama, how will she do what she just promised ‘They can get whatever they wish for’?

Vaidika comes to help Sahil wash clothes. He insists he will handle it. Prachi comes to blame that they have been facing all this because of Vaidika and her crazy daughter. Sahil silences Prachi. Both wash clothes together, deep into each other’s stare.

Vaidika asks if Sahil is a step, when Shirtij returned. If she would let Sahil be a servant in her own house. Bari Amma was about to slap Vaidika, Sahil stops her hand and warns she is his wife, she has some respect. Bari Amma blames Vaidika, her brought up and daughter; not ready to listen to anything against Shirtij.

She tells Sahil to leave this woman, she and her daughter should no more be a part of their lives. Neelam warns Sahil and Vaidika to control their house, instead of mingling with them.

Aarya slips in the washroom when Shirtij comes to hold her. Aarya notices the split oil and its bottle. Shirtij says he saw Vaidika going out of this room’s bath with cloth basket, she must be angry though it’s not a deliberate doubt. Aarya blames her mother. She then thanks Shirtij for protecting her. Shirtij says her protection is his responsibility. He wonders why her real mother behaves this way to her.

Sahil can never love her enough, but Vaidika has been blinded and doesn’t realize her daughter’s sufferings. He says he is happy she proved to be strong.

It was night, Sahil was serving the food for everyone. Vaidika forcefully sends him to freshen up while she would serve. Aarya and Shirtij come to the table. The other family members join them. Sahil was about to take a seat but Aarya stops him.

She says Sahil is the servant of the house now, he must sit in the corner where servants always sat. Sahil takes the corner but enjoys his food, saying it’s extremely enjoyable to eat from one’s hard work. The family was hurt, while Aarya chokes at once. She leaves the table. Everyone leaves the table.

In the room, Sahil consoles the crying Vaidika. He says it effected Aarya so much that he left the table. He is sure Aarya would soon be back with them. He gets an idea, kneels in front of Vaidika and offers her to go on some date night.

At a stall, Sahil brings food for both of them in the old neighborhood of Vaidika. He says they will do their special date dinner here, with her favorite food. He wanted to eat from her.

Vaidika takes the bowl and gives a bite to Sahil. Sahil says something is missing, then brings some spices. Some ladies from the neighborhood snatch their plate and throw it away. They ask Vaidika if she has no feelings for her daughter.

Sahil is a step-father, but Aarya is her real daughter; she left her all alone. Vaidika questions why they always interfere with their family’s matters. Court bailed Sahil only because he isn’t a proven murderer.

Vaidika requests everyone not to interfere in their family’s matters. Sahil lets everyone leave. He requests the stall men to play music as he wish to dance with his wife