By AmeboHub (self media writer) | 1 year ago 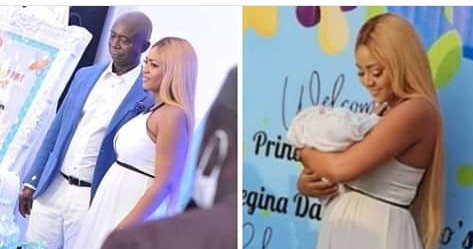 Sometime ago, Nollywood's Actress Regina Daniels got married to the love of her life 59 year old Billionaire Ned Nwoko. To say that the marriage caused an uproar on social media would be a huge understatement. The internet was not only set on fire, it was nearly burnt down from reactions of social media users. A majority of the people wondered why the beautiful actress would settle for a much older man, some argued he wasn't good looking enough for her while a host others were concerned if the young lady was actually in her right senses. A lot of people believed she married him because of wealth, while some others insisted that it was love.There has never been a consensus on Which ever of the two reasons why Regina married Ned and it is really not my concern as I like a few things from that marriage which I think every young person out there should know:

1: Never Be Swayed Or Affected By Public opinion: Throughout the initial period when the news of their affair filtered the air , it became a national case of jest and mockery But I noticed that for once Regina and her then fiancé never reacted or even granted interviews or do anything to calm the media. They were totally calm and pretended like the rest of the world didn't exist. Whether it was a self act or advice, both parties played their cards well and closed every waging mouth with sealing thee marital ties and even welcoming a baby together.

Moral: In your relationship and life in general, nobody's opinions or validations matters except yours. If it is what you want, go for it because no matter what you do, people must talk.

2: Love Is Never Enough: No matter how you want to look at this, love is a major ingredient in a relationship ,money Is included! ( and so are many other things like Respect, trust, understanding etc) Money is the spice of love. Accept it or not. I Dont want to say that It was lack of money that made Regina leave her ex- boyfriend, but the money Ned Showers on Regina plus the love they share is enough to make a sister confess.

Moral: You and your partner will not feed and run your family with love, Financial capability is crucial!

3: Internet Users Are Hypocrites: If you base and measure your level of success, love and achievement based on what you see on social media, you are of all men, most pitiable. People project good imags of themselves on social media while they are demons offline. A lot of girls who cursed and insulted Regina when she got married to Ned were also the very ones crying in secret for God to give them their own Ned, some were even among the first to rush and congratulate her when she gave birth. Hypocrites wishing they were you and ready to steal your joy at the slightest opportunity.

Moral: Do not take whatever you see online to heart, most of them are fake.

4: Beautiful Things Always Happen When you Follow Your Heart: What people hoped to happen in Regina and Ned's case did not materialise. They had expected to see them breakup even before they married but they were shocked and silently made to shut up when they not only stuck together and welcomed their first child. And from the looks of things, their love is waxing stronger by day and doesn't Look like it's ending anytime soon.

Moral: Always Follow your heart, no matter how rough it may look like in the beginning, there is always a beautiful ending.

These are four major things I learnt from Ned And Regina. What have you learnt so far?

Content created and supplied by: AmeboHub (via Opera News )