Whether they are on the throne or not, they should be accorded with respect. As the saying goes 'once a king will always be a king'.

Over the last week, there is an incidence that happened in Kaduna state as governor Nasir Ahmed El-rufai reshuffled his cabinet. Among those that got affected by the reshuffling are his former chief of staff. The former chief of staff lost his chair after he referred Muhammadu Sunusi II as the former Emir of Kano in an event.

Popular cartoonist Mustapha Bulama has released another cartoon depicting how one should keep his job in Kaduna state.

Bulama in his cartoon has depicted a conversation between a daughter and her father, where she asked her father how does one keep his job in Kaduna, the father simply replied as don't say 'The former Emir' 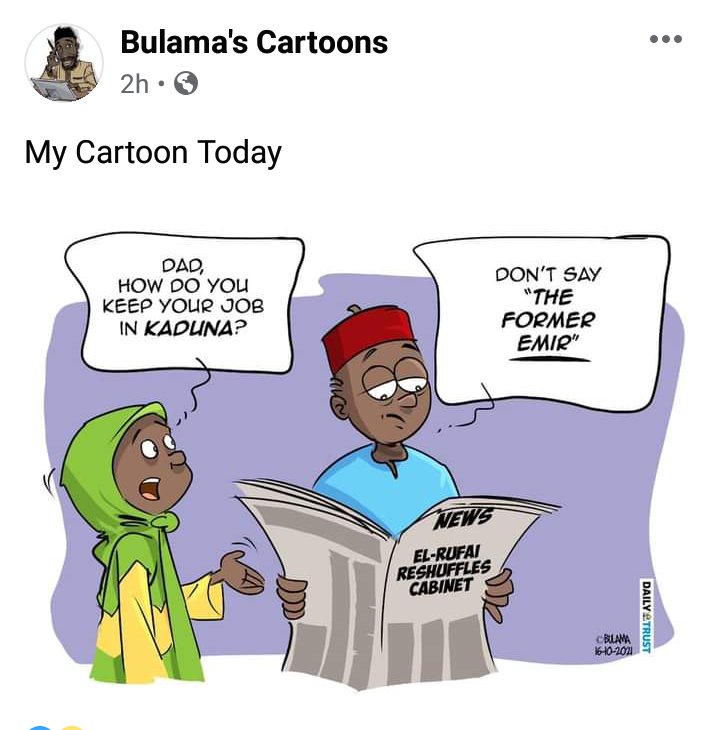 Bulama simply captures the incidence that happened between the former Chief of staff to the Kaduna governor and Muhammadu Sunusi II.

It was insinuated that the former chief of staff lost his chair simply because of referring Muhammadu Sunusi II as the former Emir of Kano.

Muhammadu Subusi II and governor Nasir Ahmed El-Rufai are close friends. The Kaduna state governor even made Muhammadu Sunusi II the Chancellor of Kaduna State University (KASU) after he lost his throne as the king of Kano.