"I thought I would have been married by now" - Saga

By DeraSoft (self media writer) | 4 months ago 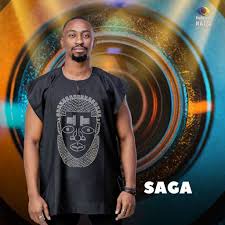 On Saturday evening, housemates competed in groups for Patricia grand price, after the competition ended, Saga and Nini got into the a serious conversation about how relationship should look like. It is known that Saga has feelings for Nini but Nini has kept him in the friend zone because she has a boyfriend outside the house.

Saga explained to Nini that he had planned that he would have been married at his current age, he made reference to the fact that he wants to watch his children grow, the 28 year old said that assuming that he gets married at the age of 31, he's going to be 51 or more when his child turns 20.

Saga was quoted saying, "I thought I would be have been married by now, like when I was younger, I planned to be married at this age. To be honest, I am a one woman kind of guy, I don't mind been in a particular schedule, I am a schedule kind of person, but I can be spontaneous once in a while."

Nini shocked by his revelation responded, "that's great, but you know I'm in a relationship."

Saga further highlighted the reason why he's not married yet, he said it is because of his financial capabilities, and if he had been financially capable, he would have been married already.

Saga also revealed that he's been in a relationship with a lady for a very long time before entering the house, he said that individual differences ended the relationship, although he admitted he still had feelings for his ex girlfriend.

Nini replied saying that he should try to make it work after the house but Saga answered that that isn't possible anymore.

Saga's revelation shows that many young men do want to settle down but lack the finance to do so.

The question now is, what age is best for a man to get married?