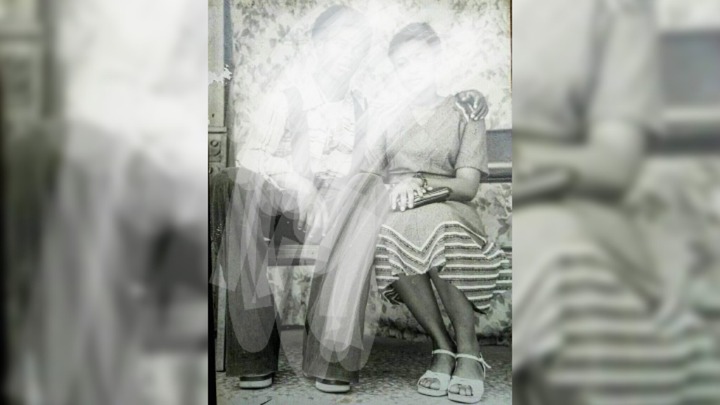 This is based on a true life story reportedly shared by Williams Mmaduabuchj Henry and made available by OldNaija on their Facebook page.

According to the narrator,his dad during his youthful age was going out with the lady in this picture referred to as "the most beautiful girl in the village" by him.

Both of them were inseparable and it was obvious that they were deeply in love with each other.

Even though they vowed never to leave each other,all the big goons in the village then ,wanted this woman.And his dad who was about 17 years of age as at that time had no wealth that could match up the rich men who wanted to snatch his woman.

The dad later traveled for studies and after awhile he got the shock of his life that his most beautiful girl in the village got married to the richest man in his town then who was fond of luring young girls into marriage.

This unfortunate incident reportedly tore him apart and all that he did afterwards were based on the experience he had with the suppose most beautiful girl in his village.

The dad decided to dropout of school and went into business,while supporting his action with the claim that educated people didn't amount to much at the time ,the son held to believe that the news of his love getting married hit him really hard.

"I believe this heartbreak made him bitter,

Would always want to stay by himself. " Henry added.

Living his life with little expectation from people.He reportedly expects worse from his numerous girlfriends he had afterwards."His opinion on issues relating to women among friends will make you think twice about him" his son said.

"He strongly disapproved of me keeping girlfriends."

With preaching that I should concentrate on my studies and make a positive improvement with my life first with advice that I should forget about women.

Ironically, he couldn't forget women himself.

Staring at this picture again,I could remember how his eyes were filled with tears when he was telling me this story.

He however acknowledge seeing the woman later on and was looking good all,she even has a nice car.

He claims ,the was even more educated now and was a civil servant.

My dad claims to be really happy for her and that were in good teems as they exchange pleasantries whenever their path crossed.

I really wish I knew this woman

I believe my dad really loved her.

This picture was in the 70s I believe.