Jamie Foxx To Star As Mike Tyson In His Biopic. See His Awesome Transformation And How They Both Met

By Sam_bassy (self media writer) | 2 years ago

As the world battle this gruelsome issue at hand, some people are getting ready for when things calm down to fast track into activities planned before we were hit by this pandemic. Popular Oscar award winning actor Jamie Foxx has certainly been busy during this world lockdown as he has been hitting the gym more often than ever in his life after he agreed to take up the role as Mike Tyson in the upcoming movie bio project about the life of the former American heavyweight boxer.

The movie which was first announced back in 2014 as Jamie casting in the lead role was hiatus on a six year wait which began to raise doubts about the movie being completed. But as of last month June 2020 in a short instagram live video interview with mega Hollywood producer Mark birnabaum, the 52-year-old actor, who is also a comedian, singer and producer, put an end to those rumors, revealing he had been bulking up with a grueling exercise regime in preparation for the upcoming film. When asked if the film would go ahead and be completed, Jamie gave an emphatic "yes."

It's a definitive yes," he told Birnbaum. "Doing biographies is a tough thing. Sometimes it takes 20 years to get it done but we officially got the real ball rolling, he said. "I can't wait to show people what it is." Jamie Foxx explained how he first met up with the former heavyweight boxing champion at the young age of 22 years during which he was a stand up comedian. According to Jamie he said I met Tyson in the weirdest ways, at my show, when I was still 22 years old and apparently told a joke about the then boxer who was sitting as one of the audience. To make that day interesting for me,after having a joke about Mike, nobody clapped or laughed. You know why? Because Mike Tyson was watching and part of the audience. met in the weirdest way, I was on stage doing stand-Tyson later approached him at the end of the show and they had a good laugh about the joke and talked more. 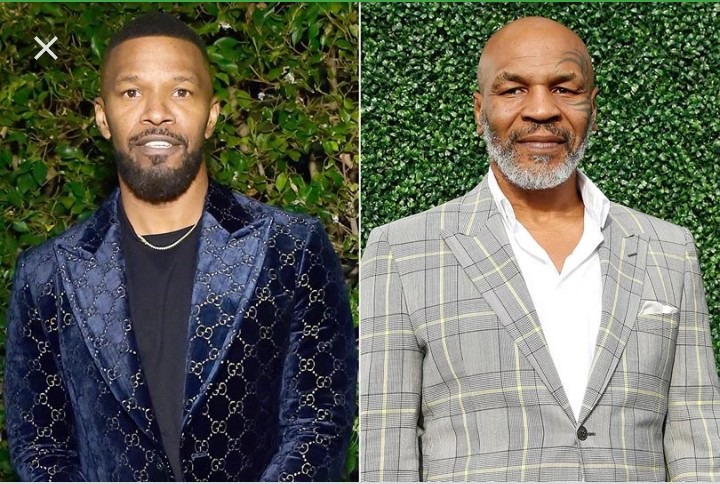 We started hanging out and In those times I got to see Mike who is now 53 years old, in two different ways, through two different lives. “I saw him at the height of his career and then when things got bad, things got bumpy, I also saw him as well, so what I’m excited about the movie is to show those moments of the different Mike." "That’s the person we want to show''.

Tyson had a really stellar career but a chequered past and up and down life. Foxx said the biopic would show his "journey." Out of the ring he spiralled out of control with a history of alcohol addiction and depression.

Tyson allegedly hit his first wife, Robin Givens, who described life with him as “torture, pure hell, worse than anything I could possibly imagine.”

He was convicted of rape of then 18-year-old Desiree Washington in 1992. Tyson was jailed for six years.

A formidable opponent and an undisputed world champion at the top of his career, the boxer was jailed after being convicted of rape in 1992, filed for bankruptcy in 2003, and pleaded guilty to possession of cocaine and driving under the influence of alcohol in 2017. According to the movie star, he said:"I saw him at the height of his career, and then when things got abi bumpy and bad, I also saw him as well. So what I'm excited about the movie is to show those moments and everything else involved".

"I think everyone, young and old, will be able to understand this man's journey."

During the interview, Jamie Foxx shared a photograph of his bulked-up physique and revealed a grueling exercise regime in preparation for the role, consisting of 60 pull-ups, 60 dips, and 100 push-ups every other day. His weight at filming, he said, would start at 216 pounds and increase to to 230 pounds. The technology behind how I'm going to look for the said movie, I guarantee you all will run up on me in the street and ask for autographs, and think that I'm the 'Mike Tyson.'

Foxx, 52, added: “We want to show everybody evolves. Everybody comes from a good or bad place and I think when we lay the layers on Mike Tyson in this story, I think everybody from young and old will be able to understand this man’s journey and the way we’ll place it.” Jamie shared this comment along with photos of his new physique saying: "The transformation begins... 'FINDING MIKE'." It's no secret that I have been pursuing the @miketyson biopic for some time... people always ask me when is it going to happen?... well things have finally lined up..." Well guys no one is actually certain, neither Mike Tyson nor Jamie Foxx are concrete sure of the release date but be sure after the pandemic we would be having the said film hitting the cinemas soonest.

Content created and supplied by: Sam_bassy (via Opera News )