I Sent DMs To Wande Coal Begging Him To Come Back, Don Jazzy Reveals In New Interview

By Joyreport (self media writer) | 1 year ago 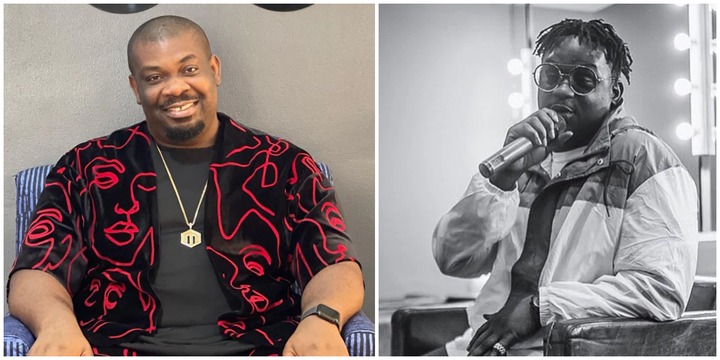 We all know there as been a controversy between Don Jazzy and Wande Coal over the years, but we will be talking about how Don Jazzy in a recent interview with Ebuka opened up about his strained relationship with Wande Coal in the past .

The Mavin boss owned up to sending several DMs to the singer begging him to come back, Don Jazzy also noted that they have both made attempts to mend their relationship.

Don Jazzy was recently a guest on the Bounce Radio interview with media personality, Ebuka Obi-Uchendu, And he had a lot to spill about his relationship with former signee, Wande Coal.

Speaking about Wande Coal’s exit, the music producer made it clear that the controversial "Babyface song "was not the major reason for their fall out.

Don Jazzy said he believed that a lot of people in the industry at the time were saying things to the "You Bad crooner",.which eventually led to his final decision.

Don Jazzy also went further to say, he has learnt that there would always be a time when artistes will feel like they can become independent and take charge of their careers, He said it doesn’t matter whether the artiste is successful or not. According to him, he believed Wande Coal had also got to the point where he felt he could take the reins of his career.

Although, Speaking on the "Babyface song", Don Jazzy explained that they had worked on the record before the Wande Coal's exit.

Indeed the Mavins Boss have tried his best by trying to reconcile with Wande Coal over the years.

Content created and supplied by: Joyreport (via Opera News )