Zeeworld: Sunday update on This is fate 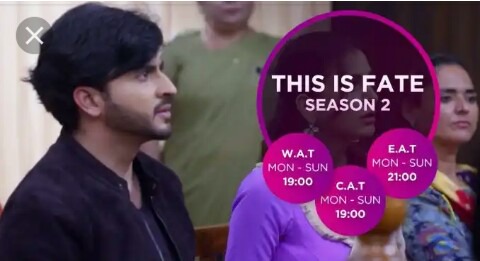 Rishab tells Sherlin he doesn’t want to marry her with the guilt. Sherlin assures Rishab that she is going to marry him, and is ready to understand him at any cost. He can share anything with her.

Rishab tells Sherlin about the misunderstanding, Rakhi told him they selected the girl who stood with Dadi. Rakhi had meant it was Sherlin, but he turned to see the girl he loved (Preeta). He will always have a place for that girl in his heart.

Prithvi overheard the conversation. Sherlin thinks she will now use this as a tool and throw Preeta out of Rishab’s life. She asks Rishab about the name but Rishab doesn’t. He says he feels lighter now. Sherlin says she is extremely hurt and heart broken, but she will forgive him. She holds Rishab’s hand that he has strengthened their relationship today and hugs him. Rishab leaves, giving her sometime to freshen up her makeup.

Prithvi comes into the room and appreciates Sherlin’s acting. Sherlin tells Prithvi now she is going to enter this Luthra family as Sherlin Rishab Luthra. She will throw that Preeta out of Rakhi and Dadi’s life, win Karan’s heart. She will become a beloved daughter in law and the whole family would doubt their own doubts. The whole family would wander around her in the house. She will beat them in a way they won’t understand. Prithvi was shocked at the new avatar of Sherlin. She leaves the room. Prithvi thinks he must remain cautious of Sherlin, she has turned dangerous for all.

Rishab says Karan has grown up, but he isn’t mature yet. He only wants he shouldn’t marry Sherlin, but can’t he; the Mandap is ready. Mahesh says what Karan says isn’t important, what Rishab wish is important. Rishab says it’s too late, and unimportant. Mahesh says nothing is late, he must tell him. Rishab hugs Mahesh.

Prithvi calls Raaj and asks about Sarla. Raaj says he is extremely annoyed with Sarla and might kill her. Prithvi strictly forbids him to kill Sarla till Sherlin has met her. They must only take care of Sarla. Afterwards, he and Sherlin would throw Sarla into water again. After the call, Raaj tells his men that he was given the permission to kill Sarla if she attempts to run again. His fellow counts it would be Raaj’s fifth murder. Raaj smiles as five is his lucky number.

In the hall, Preeta looks around for Rakhi. She wonders how she must tell her about the bomb. Rakhi greets the guests around the house. She stops Prithvi and asks how he is. Prithvi looked troubled, but replies he is fine. Rakhi understands he must feel nervous as he is soon going to marry Preeta. Prithvi takes a leave and hurries away from Rakhi. Rakhi turns around and hits Sherlin. The purse in her hands slip. Sherlin was frightened, and recalls that the men warned that the bomb might blast if it falls on the floor. She goes to sit as the dress is extremely heavy. Preeta decides she must take Rakhi’s bag near the Mandap

The wedding stage was up again. Rakhi, Kareena and Sanjana share their joy. There, Bee Ji comes to Dadi and asks if the Mandap is set again. Janki takes Dadi’s attention that Mandap looks beautiful. Kareena hurries Kritika, and Sanjana to bring bride and groom. Mahesh sat with Rishab who looked silent and upset. Kritika comes to take Rishab. Rishab was ready to go to Mandap. Preeta decides to speak to Rakhi near the stage.

A servant stops her, as he is responsible for protecting the stage and might lose his job otherwise. Preeta says she is Rakhi’s relative from the village and asks him about water. The servant sends Preeta to the other side.Sherlin was in the room and thinks what would Karan do by stopping the wedding. And that Preeta can’t reach this wedding.

Preeta came to the door, she thinks Sherlin must surely commit some mistake, it will be God’s plan to get good a victory. Preeta hides behind the couch of Sherlin and tries to peek into her cell phone. Sherlin sends a message to Prithvi, that they must keep an eye over Preeta. Else they will have to change their plan. Prithvi was annoyed.

Sherlin deletes the messages and call record. Sanjana comes to take Sherlin. She stands up at once and was about to slip. Sanjana asks her to be careful. Sherlin shouts at Sanjana for not being able to protect her daughter. Sanjana was angry at her behavior.

Sherlin says after her wedding, she won’t even speak to her. Sherlin forgets the room without her cell phone. Preeta thinks she can get to her mother through this phone.Downstairs, Karan was annoyed at Preeta. She must be afraid to face the trouble, and must be hiding somewhere. Shrishti says Preeta never ever turned her cell phone off before. Sherlin comes to take Karan and Sameer for wedding.

In the wedding hall, Rakhi thanks Kareena for finding a girl like Sherlin. Dadi claims Rakhi and Sherlin will be friend’s alike, and there won’t be any fights. Mahesh claims Rakhi and Dadi also never fought.Around the Mandap, Sherlin tells Pandit ji that her brother in law is here. Karan forbids Sherlin to call him a brother in law, at any cost. Kareena tells Sherlin that Karan is a different guy, she isn’t yet a brother in law. They take seats on Mandap.

Rakhi comes to set Sherlin’s dupatta. Sherlin looked terrified, thinking the bomb might blast if it falls. Prithvi also comes there. Both Sherlin and Prithvi were afraid. The purse drops, but Preeta doesn’t let it fall. Karan asks Preeta what’s the problem. Preeta says she liked this purse, and takes Rakhi’s permission to show it to her mother. Rakhi says she can’t take it right now, instead offers to show it to her mother after the wedding. Preeta resists as Rakhi tries to take the purse.

Pandit ji says they will have to do all the wedding rituals again. Kareena says its good, Rishab and Sherlin would marry each other twice .Preeta thinks she is really sorry. If Sherlin didn’t have the remote, she would have shown the bomb to everyone and blamed Sherlin.

Sameer comes to Shrishti and says the wedding is taking place. He says Rishab’s marrying that girl now. Both were upset. All at once, Sameer thanks Shrishti. Shrishti smiles. Sameer holds her hand and place it over his chest so she can hear his heartbeat. Shrishti was nervous and leaves.During the wedding, Pandit ji asks about Kundli. Rakhi says she took the Kundli upstairs. Preeta decides to follow Rakhi and take the purse from her.

Janki takes Shrishti away from Sameer and says they must now meet after marriage. Rakhi meets Janki and Shrishti in the corridor and asks them to join wedding rituals. Shrishti asks Janki not to tell anyone about her, before she tells her mother. Preeta hears this. She comes to hug Shrishti but leaves. Janki asks who she was. Shrishti replies she must be a super fan of hers.

Rakhi notices the girl in the veil was following her, she was suspicious and takes a round to check. Sanjana observes this. She wonders why Rakhi is taking circles. Preeta reaches Rakhi. Sanjana also comes there. Rakhi blames Preeta to be trying to snatch her purse. Preeta thinks she is extremely confused if Sanjana is innocent or is as cunning as Sherlin. She requests Rakhi to come to a corner and show this purse to her mother by herself. Rakhi wasn’t convinced and leaves with Sanjana.

Preeta now comes to Karan, and in a changed voice she asks Karan to come to a corner. Karan cautiously clears his throat, and says she otherwise takes a veil. Preeta argues in a changed voice. After Karan has walked away, Sanjana comes to ask Preeta who invited her here. Preeta points to the goon, keeping an eye over her, and claims to be his sister. She lies that his wife sent her from village to keep an eye over him.

Sanjana looks away, Preeta takes a flee.In the corridor, Prithvi gets a call from the goons. They say Preeta might not be well for long, because she is continuously crying and screaming in the room. Preeta spots him and comes towards him. Prithvi holds his hand and feels as if its Preeta’s hand. Karan comes there and strictly tells him leave the hands of this veiled lady. He now takes a selfie with her in veil.

Rishab and Sherlin sat in the Mandap. Kritika asks Mahesh why Rishab is upset. Mahesh says Rishab doesn’t want this to happen. Kareena reminds Mahesh that Rishab didn’t want to take care of his business, but after his heart attack Rishab took their business to new heights. There, Bee ji asks Shrishti why Rishab is so nice.

Preeta finds Rakhi’s purse on floor and wonders if Sherlin lied to her, because the bomb didn’t blast when it fall. Another lady comes to take her purse from Preeta. She now gets an idea to exchange the two purse, and run with Rakhi’s. Near the dinner table, Preeta sits on the opposite side of the table and grabs the purse of other lady. Karan spots her. He gets beneath the table to catch Preeta, but she was nowhere to be seen. She comes from the opposite direction.

Preeta hits Prithvi’s arm while passing by. Before Prithvi could speak, Karan reaches there. He forbids Prithvi to be seen either with his family or fan.