By joyousnews (self media writer) | 1 year ago 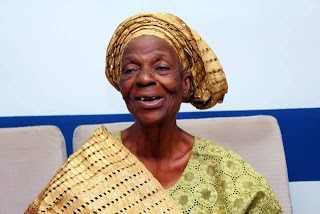 Veteran Yoruba actress Grace Oyin-Adejobi, popularly known as Iya Osogbo, has revealed why she gave up her acting career, just as she becomes 90 on Sunday, August 23.

Iya Osogbo is the widow of Yoruba actor Oyin Adejobi, who died in 2000.

During an appearance in the radio magazine Space 90.1FM, Parrot Xtra Hour on Radio, hosted by Olayinka Agboola in Ibadan, Oyo State, Iya Osogbo said that she started her acting career about 67 years ago.

She noted that she had already made a name for herself before she did the film Eran Iya Osogbo Against Belief.

The actress spoke for the first time about the day when an enthusiastic fan almost ran her over with his car in Ibadan.

She said the experience left an indelible memory for her.

"The fan finally got out of his car to tell me that he just wanted to exchange greetings with me. Later, he wrapped ten thousand naira and dropped me," said Iya Osogbo.

The veteran actress expressed her aversion to the near-naked in today's Nollywood and advised actresses not to be deceived by the pleasures of the world, but to believe that through hard work and the grace of God, they can succeed.

Iya Osogbo said that she met her late husband Oyin Adejobi at a young age. They attended the same school and lived on the same street.

She said that apart from the death of her husband, the deepest point in her life was when her fourth child, a woman, died.

"It took me a long time to recover from this experience," she said.

But her happiest moment was the birth of her first son in 1954.

Iya Osogbo, who appeared in productions such as Orogun Adedigba, Kuye, Kootu Ashipa and others, said there would be no formal event to commemorate her 90th birthday.

"I have come into this age through the mercy of God. Moreover, the Almighty also gave me the wisdom to preserve my body and to be temperate in everything I did. Our young people should also emulate this. They too should learn to be godly.

"All my fans, including colleagues and family members, have agreed to postpone any plans they have to celebrate my 90th birthday because we have to follow the NCDC's COVID 19 prevention rules," she said.

Big Brother Naija Lockdown's contender from Season 5, Wathoni, claims that most people in the house make her sick with their strange lifestyle in the house.

Her comment is directed at Kiddwaya after he said that he will be in the house while others are evicted. For her, Kiddwaya feels more important than anyone else in the house and sees everything as a competition.

The house inhabitants found it difficult to understand their play assignment that Kiddwaya read to them. A cross-section of them did not understand the task and kept thinking about it until they reached a point where they had to argue.

Wathoni added that he wanted them to lose their bet so they would see the consequences of their actions.

Content created and supplied by: joyousnews (via Opera News )