New Day's Big E Is Ready For A Singles Run

New Day was formed in 2014, and despite the early struggles, Kofi Kingston, Big E and Xavier Woods stuck together and have guaranteed their future Hall of Fame inductions based on their exceptional work over the past six years, and they still have a long way to go.

The stable has grown from strength to strength since their tricky beginnings, and have amassed eight tag team title reigns along the way. However, when will they split? Don't they have aspirations of making it big as singles competitors? 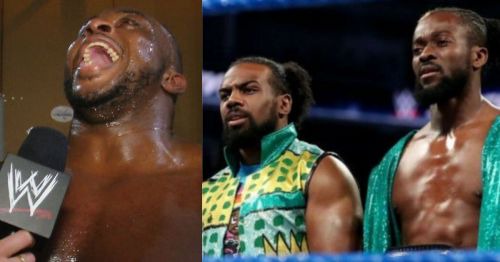 her he would like to embark on a singles run.

Big E explained that they always wanted to have a faction wherein they could all do their singles stuff while also tagging with each other.

Big E stated that while he is prepared to do singles, he doesn't think the New Day need to break up. He highlighted Kofi Kingston's example where he became WWE Champion, and there were no cracks in the faction.

Big E noted that he came in as a singles wrestler, and over time, he grew a liking for tag team wrestling. While Big E is ready to break out as a singles performer, he wouldn't want the New Day to split for that to happen.

"Our thing was we always wanted to be a faction. Kofi would have his singles stuff, Woods would have his singles stuff. We could also go into tags. I still think we can do everything we want to as a faction. I could still do singles stuff and the New Day is still in tags. I'm prepared to do singles. I came in doing singles and I never saw myself as a tag team wrestler, but I love tag team wrestling and I grew to love it. But, I still think we don't need to break up. We can do stuff like Kofi did where we still stayed a faction. We were still together and he pursued." H/T:  WrestlingNews.co

Big E also explained in detail why he felt that breaking up the New Day wasn't the best of ideas. Unlike The Shield, Big E thought that it would be rare for all three of the New Day members to benefit from a singles push a year later after a possible split.

He talked about the real bond they have formed along the way, which was strengthened during the tough initial days. Big E understood that while there are things that could make a split seem fun and dynamic, New Day offers more value as a trio. Do you agree with him?

Would you like to see Big E split from the New Day and go solo?