By Baammy (self media writer) | 2 years ago

Nothing supersede a mother and child's love in this world and, nothing can be compared to this love. Although many might believe some of these Celebrities no longer have parents, with the way many of them behave in public but they have to behave like that in other to earn a living for themselves. Below are 10 famous Celebrities posing for a picture with their moms. Kanye West posing for the camera with his late Mother Donda West at an event in Los Angeles. Rapper Lil wayne is one of the many lucky stars who received some of their major awards from their mother. JayZ and his mother Gloria Carter posing for a picture on the red carpet of an event in L.A. Gloria revealed on a song titled Smile on JayZ album 4:44, that, when she came out as gay to her son, that was when she became free and he was very supportive, although he cried but the tears was him being happy for her. Rihanna and her mother are more of inseparable as Rihanna as revealed a couple times that, her mom whose name is Monica Fenty, is her number one Idol. This picture was taken when the mother was flown to L.A. by surprise to present her the AMA icon Award in 2014, the award has only been received by Rihanna. Beyonce and her mom Tina Knowles. Tina, always making sure to let the world knows how super proud she is of her daughter, making waves around the world and inspiring younger generations. 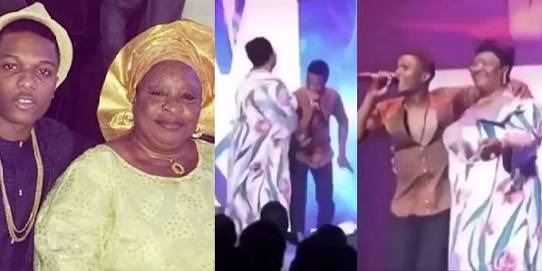 Wizkid as always shared how he value his mom more than anything and how proud he is of her. He brought her on stage during one of his performance. Nicki Minaj introducing her mother to the world in 2014 and revealing how proud of her she is. Drake and his mother at the Red carpert. Taylor received one of her major award from her mother and she was super excited. Her mother's name is Andrea. Content created and supplied by: Baammy (via Opera News )