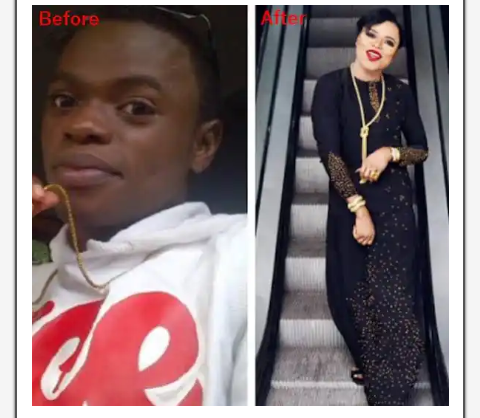 Background and Education: Bobrisky Born Okuneye Idris Olanrewaju is a Nigerian social media sensation Born in the year 1992 in Ebutte Metta Lagos State Nigeria, he like other children attended the prestigious Kings college he moved to the University of Lagos to study Accounting where he graduated with a degree in accountancy.

Age: Bobrisky was born in 1992 but his DOB is not available,but he is currently 28 years old.

Rise to Fame:. After his University Education, Bobrisky couldn't find anywork as an accountant,he now ventured into the clothing business, selling mostly fairly used female clothes and undies, he used himself to advertise his business by wearing female clothes,this was successful as it brought him much customers and increased his popularity amongst buyers.

On 2016 he started uploading pictures of himself on female clothes on social media platforms. This drew much attention as it attracted critics and applaudes as well some saw this as a comic relief and started following him on social media, and that was his journey to stardom. During that season ( from June to July) Bobrisky was the most followed and searched name on social media.

How the name Bobrisky came to be: In an interview, Bobrisky disclosed that while growing up, he was Called and known as Bobo by the people around him

And during that time he indulged in rough,risky things and people started saying " BoBo you to de take risk( Bobo you like taking risk) and that stuck with him and since then he has been addressed as Bobrisky.

Controversies: Bobrisky is well known in the cross dressing world following in the steps of Charley boy,Denrele, he is known for his controversial posts on his Instagram and Snapchat Account,he once tweeted that he is more beautiful than majority of Nigerian girls,this did not go down well as the came out in their numbers to Tongue lash the Cross dresser on different social media handles.

He once left the impression that he was Gay by posting a picture of a Man whom he called his boyfriend,that was a bold step as gay marriage is banned in Nigeria and violation attracts 14 years in prison.

He also has a close relationship with Nigerian actress and Model Tonto dikeh.

Networth: When questioned about his source of income Bobrisky he claims that he has a cream Bobrisky bleaching cream which he also claims is sold in shops abroad at a price of 400 dollars, although there is no Trace of any cream that bears that name.