King Ateke Michael Tom, the king of Okochiri Kingdom in of Okrika Local Government Area of Rivers State is one of the respected and decorated King in the State. Okrika Local Government Area which was regarded as one of the volatile area in the State because of high rate of crime has turn to be a peaceful since King Ateke took the throne of Okochiri Kingdom.

In fact, High Royal Majesty, King Ateke Michael Tom has returned peace to Okrika and has constantly said he will not spare anyone caught engaging in criminality in his kingdom. 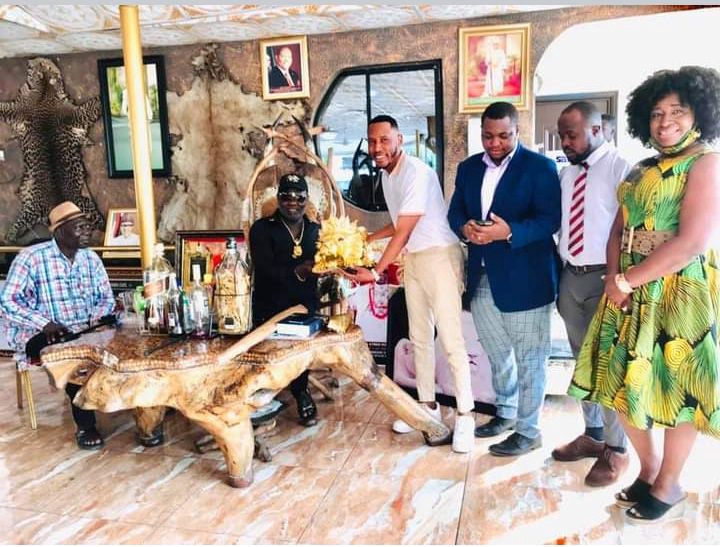 The reign of His Royal Majesty, King Ateke Tom has seen notable personalities across the world visit Okrika especially, his palace to celebrate him for his numerous achievement since he was crowned the King of Okochiri Kingdom in 2017.

One of his recent visitor is the Nigerian singer and songwriter, Abinye David Jumbo, better known by his stage name as "Mr 2Kay."

Mr 2Kay was born on February 11, 1988 in Port Harcourt and has made name for himself through his songs such as "God can bless anybody."

Reacting to the visit of the singer to his Okochiri Kingdom, His Royal Majesty, King Ateke Michael Tom took to his official social media page to thank the singer for what he called "Gift of Love and Loyalty." 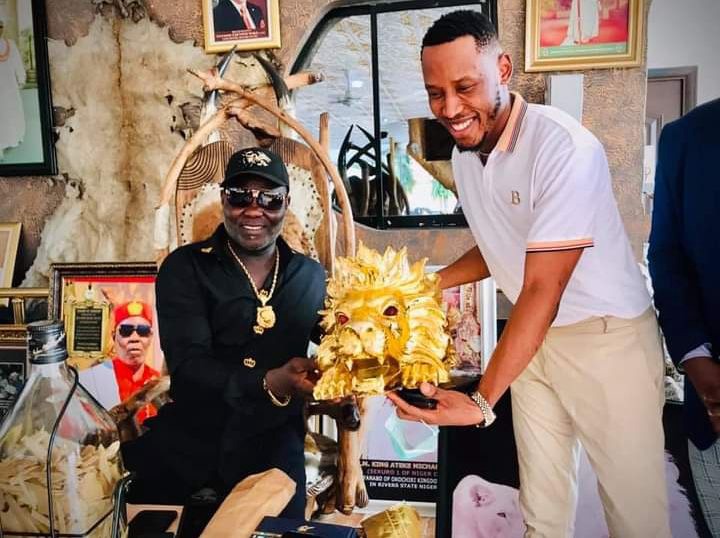 King Ateke Tom also noted that he has unwavering commitment and ceaseless support for the Entertainment Industry to grows daily with fulfillment and hope for a more glorious future for our talented and creative youths all over Nigeria.

Below is what was posted on the official Facebook page of the King of Okochiri Kingdom, His Royal Majesty, King Ateke Michael Tom after Mr 2Kay visited his Palace in Okochiri Kingdom of Okrika Local Government Area to pay him a courtesy visit with a special gift the King regarded as the "gift of love and loyalty." 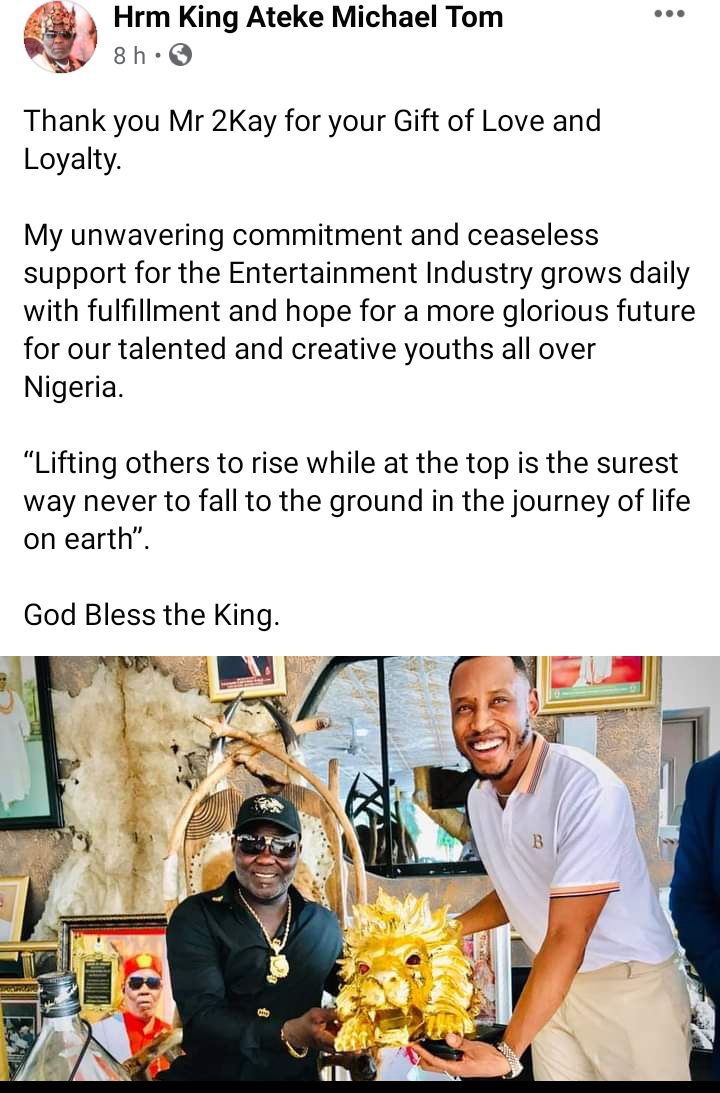 Some of the social media followers of the King have taken to the comment section of his post to celebrate their King and to pray for his reign as the King of Okochiri Kingdom in Rivers State.

Below are some of the reactions on the post made on the social media page of His Royal Majesty, King Ateke Michael Tom after the Nigerian singer, Mr 2Kay paid him a visit with a gift at his Palace:

According to reports, on October 1, 2009 which was Nigeria's 49th Independent Anniversary, Ateke Tom visited the Aso Rock in Abuja after a Presidential yet was sent to pick him. On arrival at Presidential House, Abuja, he met with the former President, Late Umaru Musa Yar'Adua, Vice President, Goodluck Jonathan and Service Chiefs.

He was granted amnesty by the President, late President Umaru Musa Yar'Adua in Aso Rock. 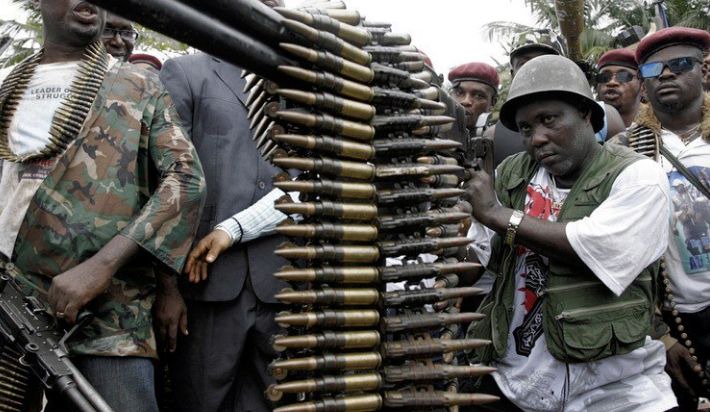 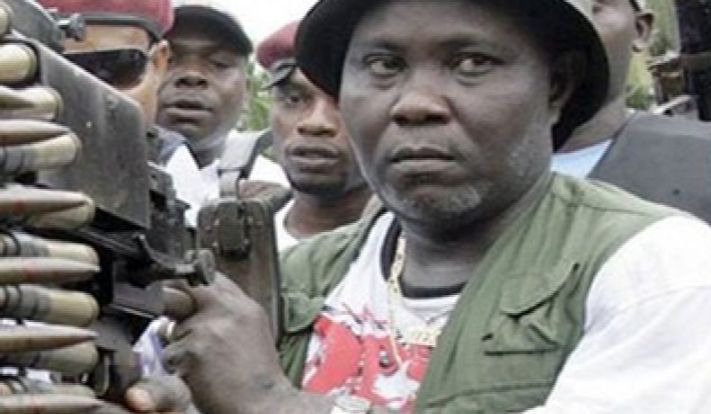 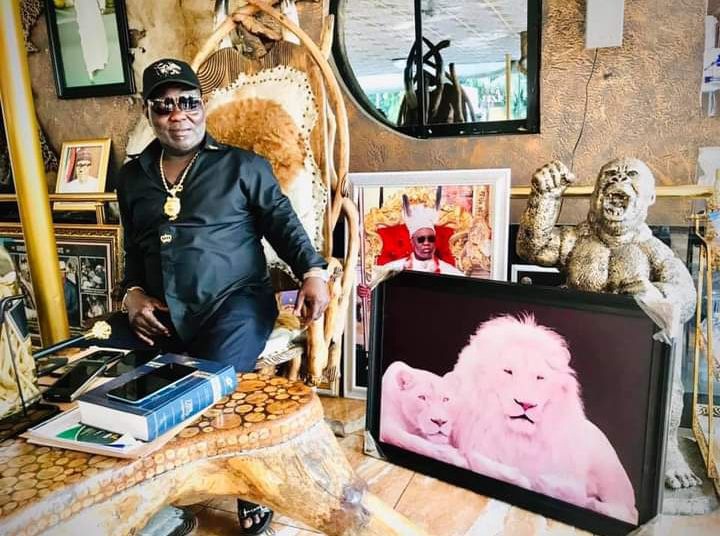 What do you think concerning this story of His Royal Majesty, King Ateke Michael Tom, the King of Okochiri Kingdom in Rivers State?

Real Madrid could announce the signing of Man City winger.

Checkout Some Photos Of Nicki Minaj In Her Stunning Outfits

BLM: The White Police Officer Who Killed George Floyd Has Been Found Guilty Of Murder