By 9ja_Skillz (self media writer) | 2 years ago

She was an American sideshow performer born with a condition called a dipygus. This means that she had two separate pelvises side by side from the waist down. 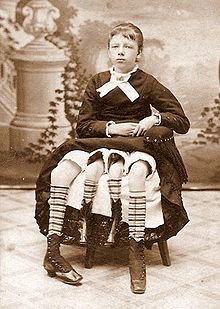 She entered the sideshow circuit business with the nickname "The Four-Legged Girl from Texas". Her popularity in the industry grew so big that other showmen started exhibiting four-legged gaffs in a bid to attract spectators with their falsified performances. At 19 she married James Clinton Bicknell, with whom she had five children for; four daughters and a son.

Sometime in 1887, approximately a year after marriage to Bicknell, she became pregnant for the first time. Her condition was discovered and Josephine experienced pain in her left side, fever, headache, and a decreased appetite. In addition, the physician attending to her noted that her constant vomiting had persisted for two months".

After examining Josephine, it was discovered that the duplication of her external sexual organs was mirrored by a similar duplication internally.

It was also discovered that it was in her left uterus that she was pregnant. However, Josephine debunked the discovery saying that "If it had been in her right side she would have come to believing that the discoveries about her we're correct." From Josephine's comments, it was gathered that she preferred intercourse in the right side with her husband.

The pregnancy caused Josephine to become seriously ill, and after consulting with colleagues, it was concluded that an abortion would have to be performed on her.

She was, reportedly, between three and four months pregnant at the time. She however, made a full recovery after the abortion, and the procedure did not prevent her from successfully carrying future pregnancies to term. Which she went on to successfully carry and have other children. She died on May 6, 1928 in Texas and her casket was covered in concrete and various family members kept watch until the concrete was fully cured.

This was to prevent grave robbers from digging up and stealing her corpse. Several medical practitioners and private collectors offered financial compensation for her corpse. There are many mysteries in this life that are yet to be unraveled and understood. Only God has the answer to all our disturbing questions.