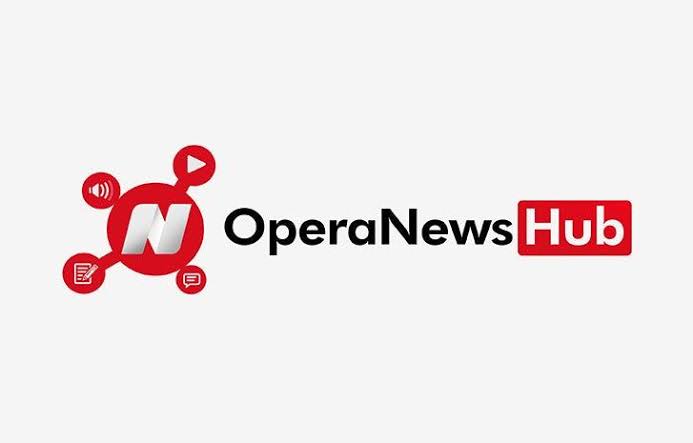 Are you a writer in Opera News Hub? Or do you intend to be a writer on this platform? You will do well to learn from my personal experience that I want to share here today. First, this article should have been titled: "Blessing in Disguise" or "The good inside the Bad" or "Every disappointment is a Blessing", etc. This is because each of these titles demonstrates the incident that happened in this article.

Friend, I am going to reveal to you how the rejection of one of my articles by Opera actually saved me from being attacked or verbally lynched, though I still suffered a little attack.

Opera News Hub is a platform that affords writers the opportunity to showcase their talents, skills, knowledge and expertise free of charge. Not only this, they also pay writers for their efforts. As a result of these, different people therefore register for one reason or the other: Some registered being driven by money involved, some being driven by fame they will get while some are simply driven by passion. These will surely have different impacts on the platform as there are many readers on it.

So, to preserve the sanctity of the platform and prevent the featuring of articles that are substandard, of low or no quality, fake, plagiarized, false, violence-inciting, etc., some rules and regulations are put in place to checkmate the writers. Violation of any of these rules by any writer y will lead to the rejection of the article of such writer.

You can hardly see any writer here who has never had some of his/her articles rejected for one reason or the other. Many of usually feel bad, dejected or disappointed each time any of our articles are rejected. But after you finish reading this article, you will have a different thought about it. 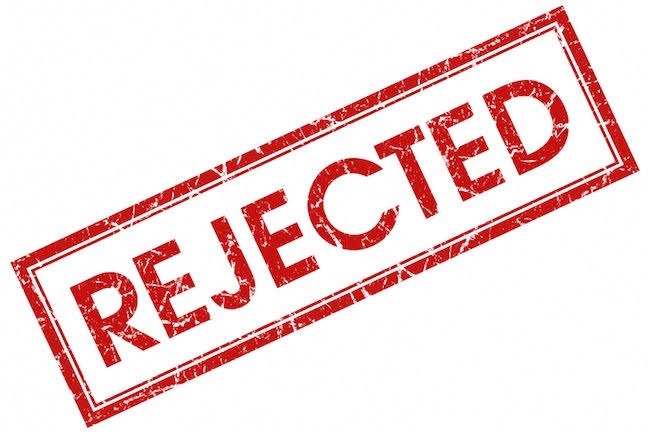 From my experience, I have come to realize that, apart from improving our writing skills, rejection of articles can also save us from being attacked, blackmailed or even banned from using this platform if we were reported by angry mob. Let's see how I learnt this lesson...

Most times I type my articles somewhere first before I copy and paste them on my page on Opera for submission. But sometimes also I type my articles directly on my Opera News Hub page, especially if I want to be typing it little by little as I continue investigation or research on it. I will write a little, then stop, and save it as draft, to attend to some things, and later come back to continue where I stop. If you are a writer on Opera News, you will know that you can't save a draft without giving it a topic.

What I usually do is to give it such a topic that is central to what I am writing about, with the intention to change it later, after I might have finished my research or investigation on it, or if I think that that topic does not fit in enough or it isn't catchy or it can cause my article to be rejected.

But I failed to do this in one of my articles this week before I hit the submit button! And you know what? That article was rejected! At first sight, I was sad to see my article rejected because I had thought o did not break any rules that could warrant rejection. But trust Opera, they will always give reasons for the rejection of articles.

In this case, the reason they gave was that my article was fake! Fake? But I knew what I wrote about. I wrote about an allegations levelled against someone by a site that he said something against the Bible. But the allegations were found to be false because the person denied he ever said such.

I tried to balance up the issue and possibly clear the person of such allegations. But I was misunderstood because of the topic. See it below: 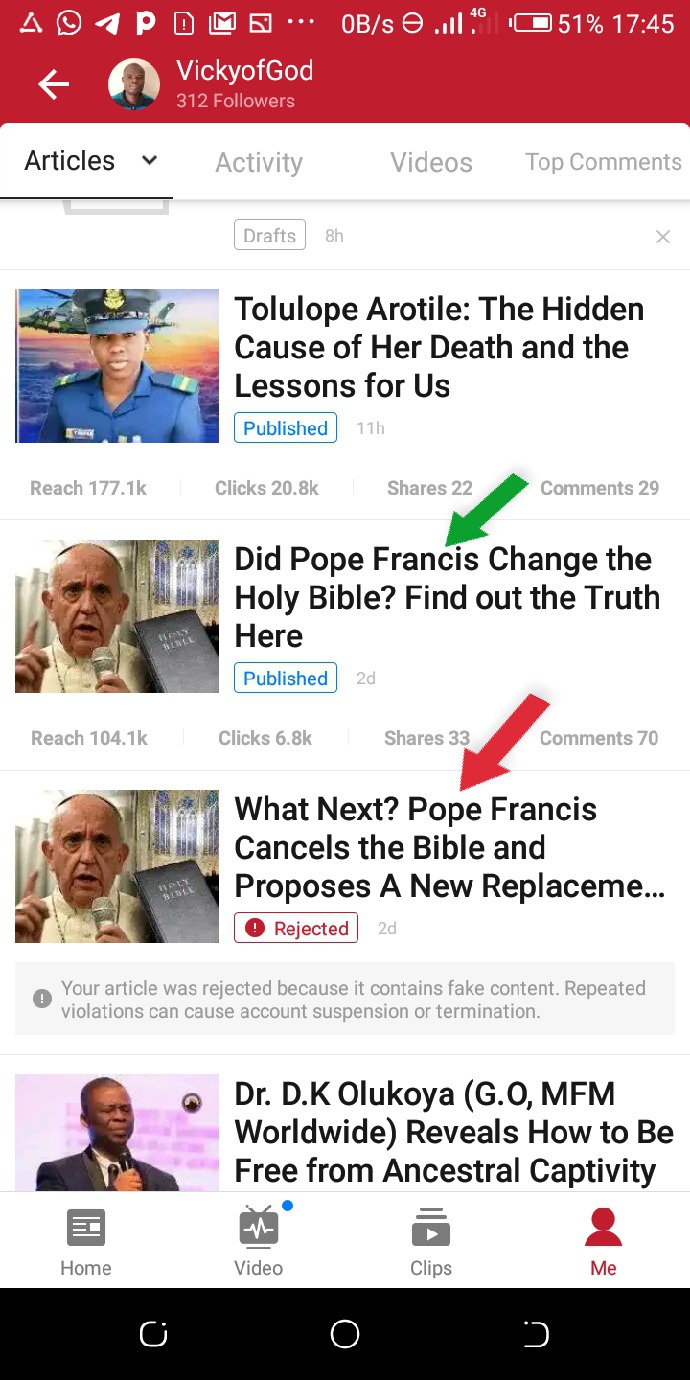 You see, someone had posted this topic on a Christian platform: "Pope Francis Cancelled the Bible and Proposes a Replacement" I became interested in it, took it up and made a research on it. And in the process, I had to first put the central theme as a topic as my usual practice while I continued my research.

But in my research, I found out that Pope Francis didn't say such things because he never came out to openly to say it, in fact I found out that he denied it. Meaning that he ever said anything of that nature.

However, after I finished writing, I totally forgot to change the topic. That's why the article was rejected as a fake news. And this proved to be a blessing in disguise. How? Despite the fact that I balanced the report and tried to clear the Pope in the body of my article, made people still made confrontational and abusive comments against me.

In fact, they went as far as reporting me to the Opera News Management. I was so surprised that most of the people looked away from my own statements that defended the Pope but began to speak against me and to call me bad names. I even wrote clearly that I don't believe Pope Francis said such things in my post. Yet, they seemed not see it. Now see some of their comments below... 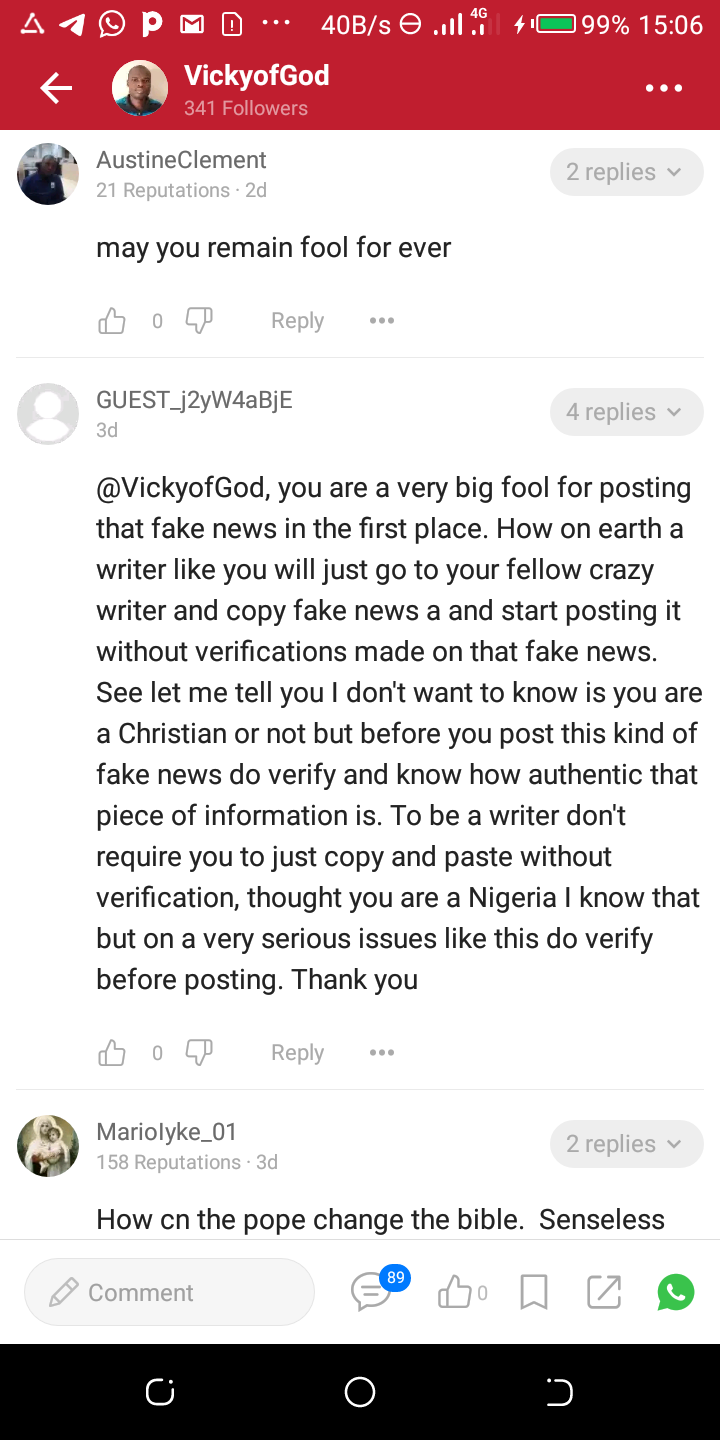 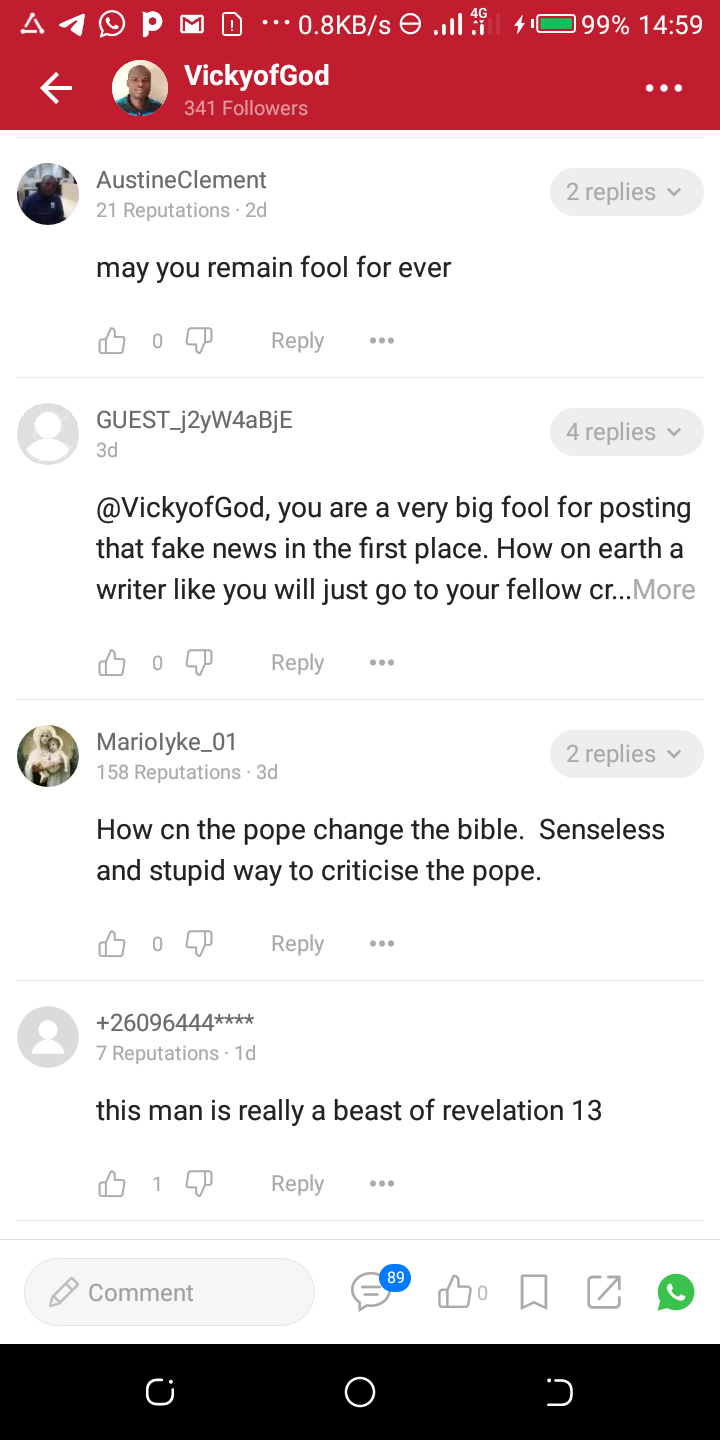 What can we say to these? Can you see what these people wrote against me? Despite the fact that I made myself clear that I don't believe Pope Francis said such things in my article. Again, you can see that my final topic that was eventually published doesn't say or suggest that I meant that Pope said it or did anything like that.

Now come to think of it: If the topic that was only a question which didn't suggest anything could cause such an uproar from those who are always inclined to find fault and fight things out, what do you think would have happened if the first topic had not been rejected by the Opera but used?

This people would have crucified me alive! They would have torn me to pieces with their mouths! Therefore I give kudos to the Opera News Crew in charge of publication for the job well done. This people are simply wonderful. They should be appreciated.

Lessons from all these? Yes, first is to my fellow writers on this platform: each time they reject our articles, let's not be bitter against them. Let's take it with understanding and patience and try to find out what is really wrong with it that make them reject it.

Other lessons I learnt personally are these; 1. That I should always make my research well and balance things up where necessary before I post my articles, especially those that deal with personalities.

2. That I should always crosscheck everything in my articles from the topic to the end of the body of the article before I hit the submit button.

3. That whenever my article is rejected, I should patiently look for the amendment using the reason for the rejection as the light.

4. That I should always bear in mind people's views, perspectives, opinions and reactions about the topic and subject of my article.

5. That the rejection of any article does not mean that it cannot be accepted and published if the error(s) is/are corrected. Like in my own case, all I just did was to change the topic and resubmitted and my article was published without changing anything in the body of it.

6. That there are people who don't read articles patiently and with open minds but they are always ready to fault and launch verbal attacks against the writer without any regard to the writer's conclusion or main point.

7. That we should always be very careful of fake news and be cautious in handling such as apart from reducing our credit score, they can also damage our reputation.

Fellow writers, you can also add your own lessons if you really understand my post. Thank you and remain successful in Jesus' Name.