Throwback: How legendary singer, Fela Anikulapo Kuti got married to 27 women and divorced all of them 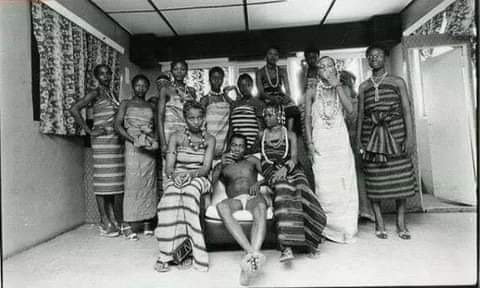 Fela Anikulapo Kuti and his wives

Late legendary musician, Fela Anikulapo Kuti, was a famous singer in Nigeria and an activist, who was recognized, because he mostly used his songs to criticize government and also, his weird performances on stage helped him in becoming popular.

However, in the year 1978, Fela Anikulapo Kuti became more popular, when he decided to get to married 27 women, who were his back up dancers and singers in just a day. Information given concerning the event made it known that Fela asked them if they would marry him as husband and the 27 women all accepted to marry him, although, not all his singers and dancers accepted his proposal.

After the agreement, the legendary singer took all the 27 women to one hotel in Lagos State on the 20th of February, 1978 for marriage rites, that was performed by twelve traditional priests which he (Fela) called to preside over the wedding and coordinate it.

After the surprising wedding ceremony, Fela Anikulapo Kuti took all his wives to Ghana for honeymoon, as he also brought them back to Nigeria after their honeymoon.

Unfortunately for the 27 women Fela Anikulapo Kuti married on the same day, he divorced all of them back in 1986, which happens to be just eight years after their marriage. When Fela Anikulapo Kuti was giving his reasons for departing from his wives, he said that his marriage to them only established jealousy, hatred and selfishness among his wives, as he could not tolerate their attitudes anymore and due to that, he decided to let all of them go.

However, on the 2nd of August, 1997, which was 11yrs after Fela Anikulapo Kuti divorced his wives, he gave up the ghost and after his death, Professor Olikoye Ransome Kuti, revealed the cause of his death, as he claimed that Fela died of HIV/AIDS.