By bewajifolashade (self media writer) | 4 months ago

When a woman saw her baby girl for the first time, she became heartbroken because the doctors painted a bleak picture of her future. Astonishingly, that same girl defied the odds and became a source of inspiration for the world. 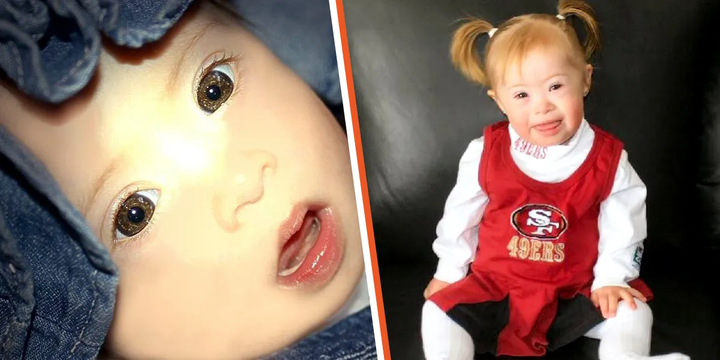 You might have heard that nothing worthwhile comes easy. Some of the most successful people are said to have experienced endless trials and tribulations before reaching the peak of their careers.

Failures and hitting rock bottom are a reality, but their unwavering determination and perseverance might help people get up and move forward. Beating the odds can be daunting, but self-belief and a strong support system might help make things less cumbersome.

At AmoMama, we love sharing stories that are incredibly inspirational and heartwarming. Today's story encapsulates a similar theme and sheds light on the institution of family and the power of self-determination, hard work, and love.

Like most women, Renee looked forward to becoming a mother. Already a mother to three children, she couldn't wait to hold her baby girl and smother her with hugs and kisses. Fortunately, the fateful day arrived in 2004 when she delivered her daughter.

However, things took an unexpected turn when she laid eyes on her little girl for the first time. Even though her heart was filled with nothing but love for her daughter, something worried her, and she couldn't shake away the feeling.

But the question was: What led to the new mom's anxiety? It turned out that her little girl, Kennedy Garcia, was born with Down syndrome, a genetic disorder where a baby is born with an extra chromosome.

In 2019, the young guy also asked garcia to his homecoming dancing and if she would be his girlfriend.

Down syndrome is characterized by intellectual delays and variations in physical features, but many people with the condition have gone on to have fulfilling lives. But Renee wasn't aware of the bigger picture then.

She became distraught when the doctors reportedly said that her newborn wouldn't have a quality life, that she would continue to wear diapers even as an adult, and would be better off in a special institution. Renee recalled:

"The night Kennedy arrived, I was heartbroken to learn she had the condition because I was being fed nothing but a negative, bleak picture painted by doctors and nurses who really had no idea what my child‘s future really held."

According to the woman from Colorado Springs, one medic suggested she consider adoption. The then-40-year-old Renee was heartbroken and didn't want to turn her back on her little princess.

A RAY OF HOPE

Then, she met someone who comforted her and gave her a glimmer of hope. Renee said she spoke to a kind midwife who called Garcia "beautiful" and explained her own daughter with Down syndrome led a happy, normal life. She revealed:

"The first thing I asked was if her daughter could walk, because I really didn't know what having the condition meant, and she just laughed. Her daughter was 16 and of course she could walk. It gave me hope for the future."

After speaking to the nurse, the devoted mother became hopeful and refused to give up on her daughter. She bravely told the doctors she would raise Garcia and shower her with love, care, and support and that her little girl would thrive.

The dedicated mom-of-four beat all odds and gave her beloved daughter a healthy, loving, and supportive environment. Much to her delight, Garcia grew up to be like most girls her age. Moreover, the brave little girl also survived a few health scares.

Garcia, whose father worked in security overseas, had leukemia and underwent dangerous surgery to stabilize her neck and spine. Regarding her daughter's critical health condition, Renee recollected:

"She'd just recovered from leukemia when we learnt the top of Kennedy's cervical spine was separating from the base of her skull. It was a miracle she hadn't been paralysed already."

According to her mom, Garcia spent six months in a metal frame screwed into her skull to immobilize her neck. But the youngster drew strength from her ordeal and remained positive. Renee described that her daughter spent her time watching dance videos.

THE START OF A GREAT CAREER

After recovering, Renee took her then-five-year-old girl to her first dance class, and she didn't look back since. The Colorado woman shared that her daughter turned their family dining room into a dance studio and practiced daily.

The teenage Garcia signed deals with KMR Diversity and Dream Talent Management agency. According to Renee, she took regular flights from her Colorado Springs home to Hollywood and New York for auditions, modeling, and being extras on TV shows.

The doting mother was elated to see her daughter thrive. On Garcia's first birthday, Renee said she returned to the hospital where she gave birth to her and left a special care package for new moms and babies with Down syndrome in the labor room.

The woman described that she put copies of positive books in the box that helped her understand the disorder and adorable onesies with slogans celebrating special babies. Renee also left her contact details and requested the midwives share them with new moms. She added:

"Many reached out to me over the years because of that basket and I hope having a positive conversation with me and hearing everything Kennedy has achieved, saved those moms from the unnecessary trauma and anguish I went through."

Renee watched her daughter defy the odds and accomplish her dreams like a proud mother. Her teen daughter was also particularly close to her three older siblings, including sister Kassidy and brothers Kameron and Keegan. Renee noted:

"She has a posse of friends who adore her, she loves to dance, sing and experiment with her hair and makeup. She goes to the cinema with her brother and their friends and sometimes breaks the rules."

Garcia is said to be thriving in her personal life too. Her work led her to meet her boyfriend, Matthew, when she was 12 and auditioning for an advert. The young man, who also had the genetic condition, was brave enough to walk over and introduce himself.

According to Renee, Matthew came straight over, handed Garcia his cell phone, and said, "I think my phone's broken because it's missing your number." The Colorado Springs woman said she was impressed with his smooth talk and described him as "brave and funny."

After her seal of approval, Garcia and Matthew became great friends and started talking on FaceTime. In 2019, the young guy also asked Garcia to his homecoming dance and if she would be his girlfriend.

Thanks to their children's blossoming romance, Renee and Matthew's mother, Emmy, flew the teenagers back and forth between California and Colorado once a month and became good friends.

In October 2019, Renee took her daughter shopping for a homecoming dress in New York and admitted she was in awe of Garcia spinning around in her gorgeous dress. She was reminded of when the doctors said her baby had to be put into an institution. Renee mentioned:

"It's shocking how misinformed they all were, and it was only 15 years ago. I feel sad that I wasted time grieving for moments like prom dress shopping as I really had been led to believe none of the normal milestones would be reached."

Today, Garcia is a promising youngster, who has modeled for American Girl, Disney, Zulily, Aetna, and Justice Clothing, competed in state-wide dance competitions, and starred in a nationwide TV advertisement.

The mother-daughter duo continues to inspire the masses with their phenomenal journey and deliver talks at schools, raising awareness of what Down syndrome is and how they can support family and friends with the condition.

Garcia also has a large fan following on social media, where she has garnered sheer love and appreciation from her followers. According to Renee, her daughter's positivity and resilience have enabled her to avoid negativity and criticism.

Renee, whose daughter is now a famous star and continues to achieve more success, has advised other parents to celebrate their children and let them follow their dreams. The happy mother further expressed:

"We just have to celebrate our children for wherever they are in their own journey through life, whether they're out making movies, sitting at home and colouring a beautiful picture, nailing algebra in school, or simply laughing and loving life."

Indeed, Renee and Garcia's heart-melting story shows the power of a mother's love and how it can make the impossible things possible. If this beautiful story warmed your hearts, please share it with your family and friends.

Content created and supplied by: bewajifolashade (via Opera News )