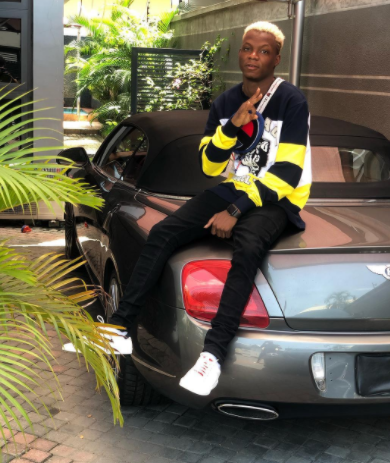 The speculations that Starboy Record Label signed artist, Akewe Daniel known professionally as Terri, has been the brain behind Wizkid’s recent hit songs have attracted attention from several quarters.

The Afro-pop singer, Starboy Terri in a chat with CityBuzz debunked claims alleging that he writes Wizkid’s recent hits. The artist claim that though, he and Wizkid make music together whenever he’s opportune to be in the studio with the superstar, but denied ever solely responsible or writing a song for Wizkid. He hope to be able to do so, someday.

In his words, “there are speculations that I write songs for my boss, we make music together when we are in the studio together, most times when we can, because he is not always in the country. So every time we can, it’s always an opportunity for us. Whenever, he’s around, because you will never find him that easy, so it’s always an opportunity for us to work together. We get in the studio, we work, you can’t be as creative when you are alone, compare to when you are in the same space with (Wizkid). It’s normal to share ideas, but literal song writing, like a hundred percent, NO!” Terri added, “I hope so someday, but for now, I don’t know.”

The Edo-Lagos born artist also revealed that he’s a signed artist on Starboy record label, even though the terms of the contract are not strictly adhere to.

Revealing this to CityBuzz, the Ojoro crooner said, “Is there any official contract? Yes, there’s, but, like, it’s all love, I ‘ve never been pressured to do things based on the contract terms, everyone’s minds are set at achieving goals, it is not like there’s pressure to achieving everything that the contract stated.” The twenty-seven-year-old artist added that, “of course there’s binding law, legal agreement.”

Why I Was Absence From The Music Scene - Iceberg Slim Reveals

Why It Took Him Time To Release An EP

Terri who recently release an EP titled 'Afro Series' speaks about why he took this long for him to drop the body of work, saying he needed time to find and defining his sound. The Ojoro crooner also disclosed that even though, he appeals to younger demography, he hopes everyone get to listen and enjoy his music. In his words, why I ‘m on my EP one, is because, I wanted to give people an introduction to my sound. I wasn’t really putting out a lot of singles, so a lot of people don’t know what my sounds is like, hence I wanted to give people the definition of myself. There’s a lot of music, in fact, there are so much music, to fill up for an album, so, I said let’s take it from step to step.”

He also revealed that after the first EP, he’s working on other albums. He said, “After my EP I’m working on a lot of album, a lot of features, so just keep your head down, and I’m also trying to keep my head down, just chill for me, while we see the next thing that happens.

Terri also disclosed that he would be throwing campus shows when things normalize from covid-19 pandemic. According to him, “I‘ve been working, I‘ve never stopped working, and I want to make my fans see that there’s more to everything that they see right now. More music, more music videos, more collaborations, expect new album. On the long run, I’m working on putting the Terri brand out there, more. When we can have concerts, when we can go around, I have plans to organizing School tours, meeting people of my age and have connections, basically through music. Music is what is needed to do all of this. Music in my head first and every other things comes afterwards.”

Terri was signed to Ayodeji Balogun, aka Wizkid’s owned record label in February 2018, came to limelight when he featured in Wizkid's song titled 'Soco', which also features guest acts like, Spotless and Ceeza Milli.