Meet the Shortest Woman in the world 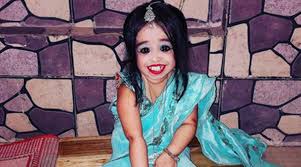 she was officially declared the world's shortest woman with a height of 62.8 centimetres (2 ft 0.6 in). Her restricted height is due to a genetic disorder called primordial dwarfism

Age was featured in the 2009 documentary entitled Body Shock: Two Foot Tall Teen. She was also a guest participant on Bigg Boss 6, an Indian television show. On 13 August 2014, she was cast in the fourth season of American Horror Story: Freak Show

In 2012, she met the world's shortest man, Chandra Bahadur Dangi of Nepal. The pair posed together

Content created and supplied by: Vector01 (via Opera News )