Do You Know Hera, Aphrodite & Athena Caused The Trojan War? The Real Story Is Not About Helen Of Troy

It is very popular to believe that Helen of Troy is the cause of the Trojan war which is wrong.Helen of Troy also known as beautiful Helen,or Helen of Sparta,was said to have been the most beautiful woman in the world.She was believed to have been the daughter of Zeus and Leda,and was the sister of Clytemnestra,Castor and Pollux,Philonoe,Phoebe and Timandra.She was married to King Menelaus of Sparta.The usual tradition is that she was raped and forcefully abducted by Prince Paris of Troy.Another tradition is that she was seduced by Paris.Another ancient tradition told by Stesichorus,tells of how "not she,but her wraith only,had passed to Troy,while she was borne by the Gods to the land of Egypt,and there remained until the day her lord(Menelaus),turning aside on the homeward voyage,should find her there." This resulted in the Trojan war when the Achaens set out to reclaim her. 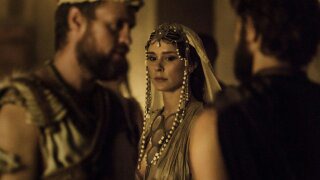 Helen of Troy in the adapted TV series

The Greek gods had a big hand in the matter.This article brings to your notice a common story in Greek tales which will make you believe that Helen of Troy whom most people blame as the cause of the war is not the cause but a pawn merely used by two Greek goddesses as a channel for their rage towards Paris,the sheperd_prince of Troy. Read on and be surprised!

Zeus,the king of the Greek gods held a banquet in celebration of the marriage of Peleus and Thetis(parents of Achilles).However,Eris,goddess of discord was not invited for it was believed she would have made the party unpleasant for everyone.Angered by this snub,Eris arrived at the celebration with a golden apple from the garden of the Hesperides on which was inscribed "To/For the most fairest," which she threw into the proceedings of the party as a price of beauty for the most beautiful among the gods.Three goddesses claimed the apple:Hera the wife of Zeus and goddess of matrimony and fidelity, Aphrodite the goddess of love and sexual desire, and Athena the goddess of military strategy and wisdom.They asked Zeus to judge which of them was the fairest,and eventually he,reluctant to favour any claim himself,declared that Paris,a Trojan mortal,would judge their cases,for he had recently shown his exemplary fairness in a contest in which Ares( Greek god of war) in bull form hard bested Paris' own prize bull,and the shepherd_prince had unhesistatingly awarded Ares the prize of the contest.After Paris failed to judge their beauty with their clothes on,the three goddesses stripped nude to convince him of their worthiness.While Paris inspected them,each attempted with her powers to bribe him; Hera offered to make him king of Europe and Asia, Athena offered wisdom and skill in war, and Aphrodite offered the world's most beautiful woman.This was Helen of Sparta,wife of the Greek king Menelaus.Paris accepted Aphrodite's gift and awarded the apple to her,proclaiming her the most beautiful of the Greek gods.He received Helen as well as the enmity of Hera and the Greeks;especially Hera who promised to punish him severely.Athena's rage at losing makes her join the Greeks in the battle against the Trojans,a key event in the turning point of the war. 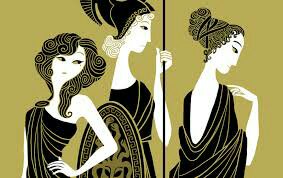 According to a tradition suggested by Alfred J.Van Windekens,objectively "cow_eyed" Hera was indeed the most beautiful not Aphrodite.Aphrodite,though not as objectively beautiful as Hera,was the goddess of sexuality and was effortlessly more sexual and charming before Paris.Thus,she was able to sway Paris into judging her as the fairest.Athena's beauty is rarely commented in the myths,perhaps because Greeks held her up as an asexual being,able to "overcome" her "womanly weaknesses" to become wise and talented in war.

Helen of Troy was simply used as a pawn by another woman who was more powerful to get what she wanted.Paris most have been given the power to seduce Helen away from her husband. 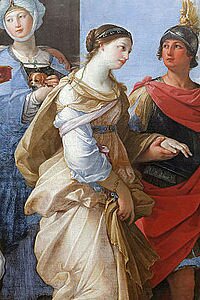 May we never be the playthings of gods!

What are your views concerning this article?Drop your comments.Please do not forget to like and share.Many Thanks!

Photos in this article are for illustrations.