How To Decorate Lion King Birthday Cake With 25 Pictures 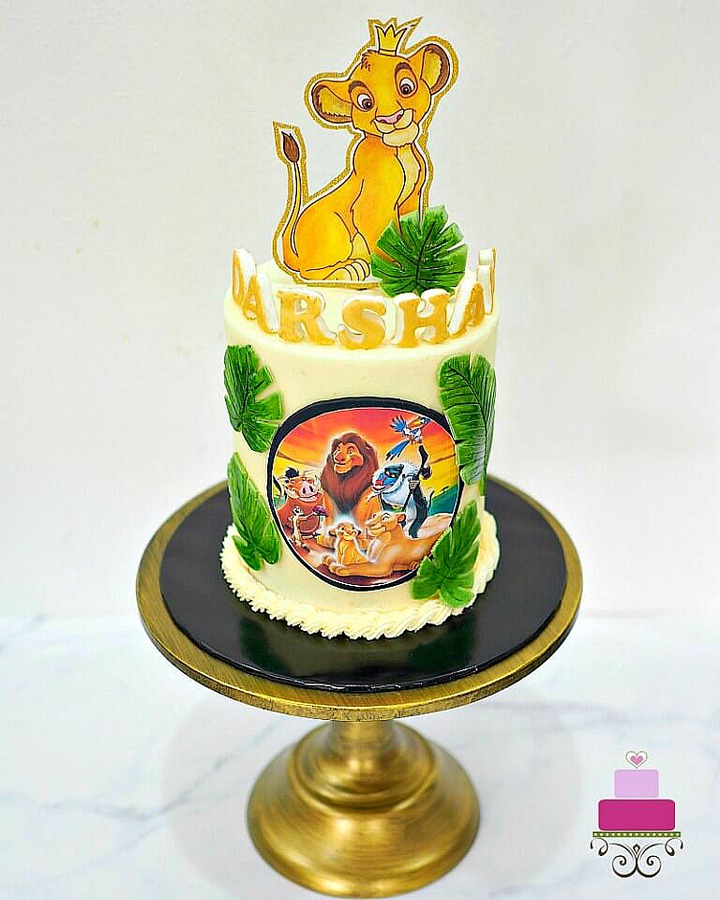 A simple Lion King cake design decorated in buttercream and fondant. This is a pretty easy cake to put together and makes an awesome birthday cake for Lion King fans!

When I asked my 6 year old boy, the cake design he would like for his 6th birthday last year, he was toying around a few ideas and finally, settled on a Lion King themed cake.

I was not surprised with his choice, the movie The Lion King was released in cinemas just a few months before his birthday and he was so into Lion King then.

He wanted Simba as the main character and along with Simba, he wanted the entire Lion King family including Timon, Pumba, Zazu and Rafiki. And so I set on making a Lion King cake for him.

This was a buttercream covered cake, and decorated with a handmade Simba cake topper (made with paper), Lion King edible image and fondant jungle leaves and fondant letters.

All in all, I had a lot of fun decorating this cake and hope you would too!

How to Decorate a Lion King Cake

These were the main supplies used to decorate this buttercream Lion King cake:

Cake - this was a 6 inches round cake that was also 6 inches tall. The cake was made up of 4 layers - 2 layers of vanilla pound cake and 2 layers of chocolate cake.

Buttercream - I used by buttercream to sandwich the cake layers as well as to cover it smooth on the cake. I also used the same buttercream to pipe of a layer of rope border on the bottom edge of the cake.

Fondant - I used Satin Ice fondant for this project. I used white fondant (tinted in Wilton Juniper Green ) for the leaves and black fondant for the background of the edible image on the side of the cake.

Simba paper template - I sourced this from the internet and resized it to fit the top of my cake.

Jungle leaves paper template - These were sources from the internet as well and resized to fit the cake.

Edible gold paint + lemon extract - I mixed these for form a thick gold paint which I then painted on the front surface of my fondant letters.

Piping tip number 18 - this was used to pipe the rope border for the cake.

Round cutter - I used this to cut out my black fondant for the edible image.

Juniper Green food color - I used this to tint my white fondant for the leaves. I also used this food color to paint the fondant leaves.

Long wooden skewers and toothpicks - these were for the Simba cake topper, the leaf cake topper as well as the 3D fondant alphabets.

And this was how I put the Lion King cake together:

I got the image from an internet search and ordered a print of it in a round frame from a local edible image printing shop. I did this one week ahead of the birthday.

Next was the Simba cake topper. I wanted to find the simplest way to get a nice Simba topper for the cake. I could not find anything that was to my liking that were available for purchase, so I went ahead and made one myself with paper and a thin skewer.

How to Make Simba Cake Topper

The first step was to find a printable image of Simba to make the topper. Again, internet was my source. Once I had the image I liked (Simba in a sitting position with a cute crown on his head), I resized it (see my post here on how to resize images and templates for cake decorating) and printed out in color, on a piece of normal A4 sized paper.

I then cut it along its outline. 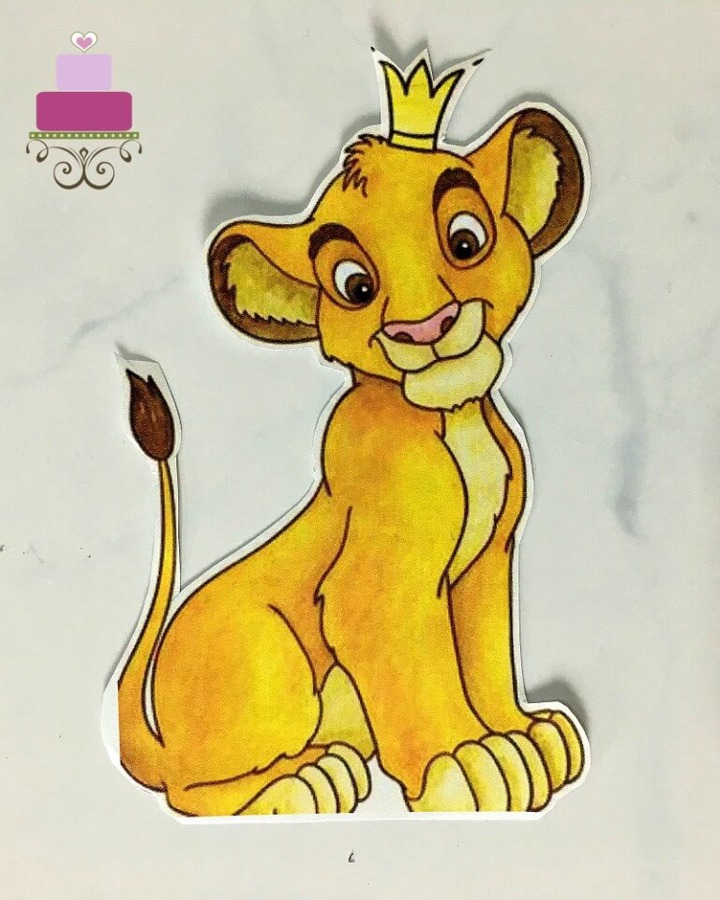 Since this was a normal A4 paper, I knew I had to paste it onto a thicker cardboard in order for it to stand upright on the cake, so I choose to use a gold glitter cardboard as the backing.

I applied glue to my Simba cut out and pasted it onto the cardboard. And then I cut the cardboard, leaving a thin outline of the gold visible around Simba after cutting. 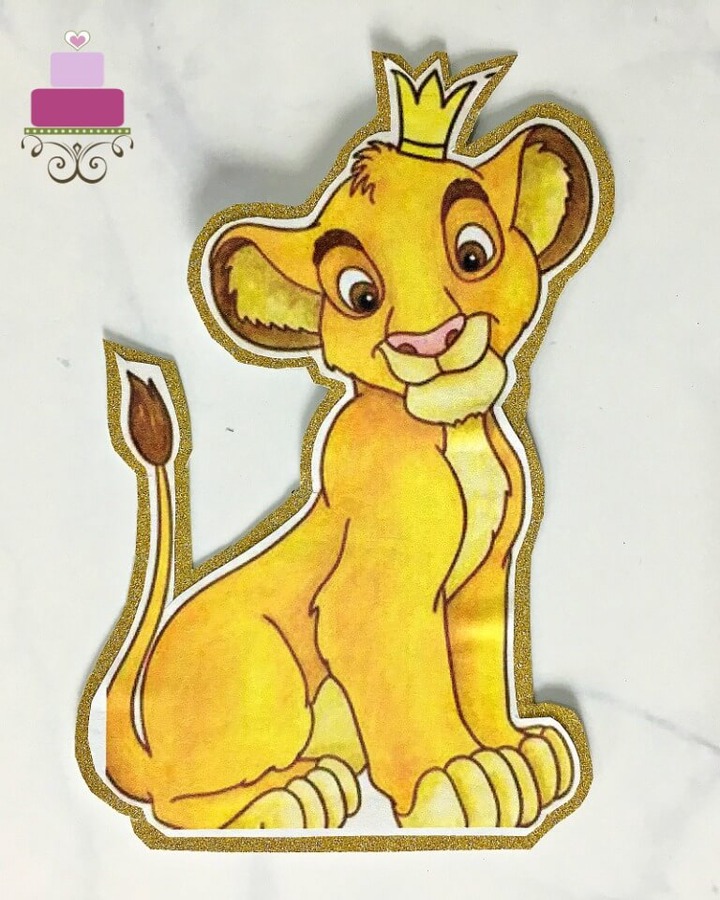 In order for the for the topper to stand upright onto the cake, I had to attach a long thin skewer to the back of Simba cut out with some tape. And to make sure the tape and the skewer did not show on the reverse side of the Simba topper, I decided to attached another piece of glitter cardboard at the back.

To do this, I attached the skewer first and then applied glue all over the back of the topper and attached it to the reverse side of my glitter card board.

And then I cut the cardboard out, following the Simba topper outline as closely as possible. 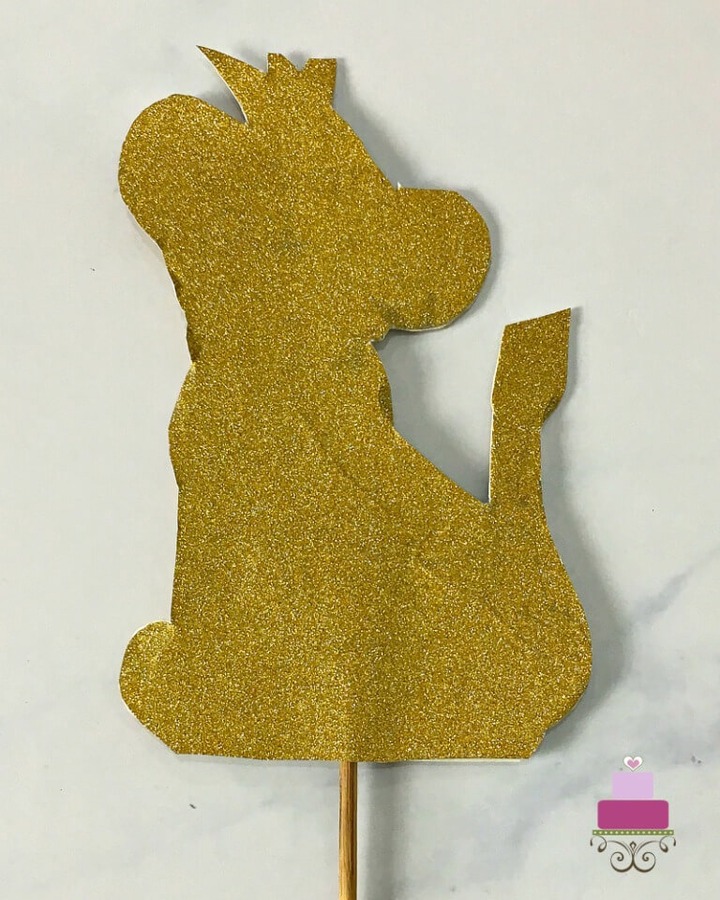 And this was how the completed Simba topper looked like: 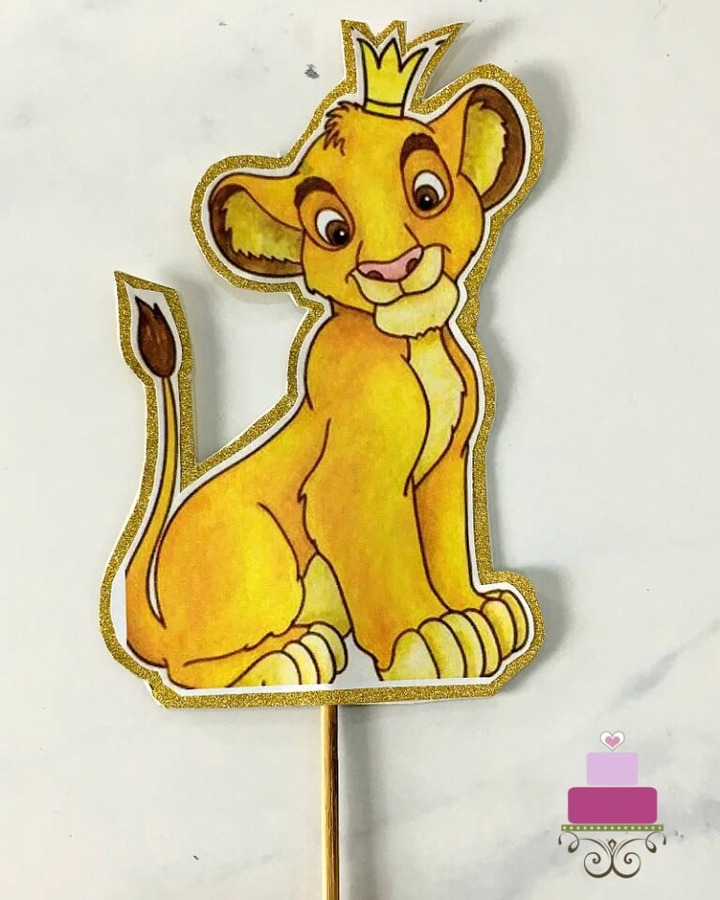 All the leaves on the cake were made using fondant. I had a total of 5 leaves - 4 attached to the side of the cake and one placed in an upright position next to Simba topper.

I did not have any special cutters for the leaves. So I used paper templates as a guide in cutting them out.

To begin with, I needed the leaf templates. These jungle leaves are pretty easy to draw, but i chose to get mine from the internet.

I printed the leaves images and cut them out following their outlines.

Next, I tinted my white fondant green and rolled it thin.

Using my paper templates as guide, I cut out the leaves using my sugar craft knife. 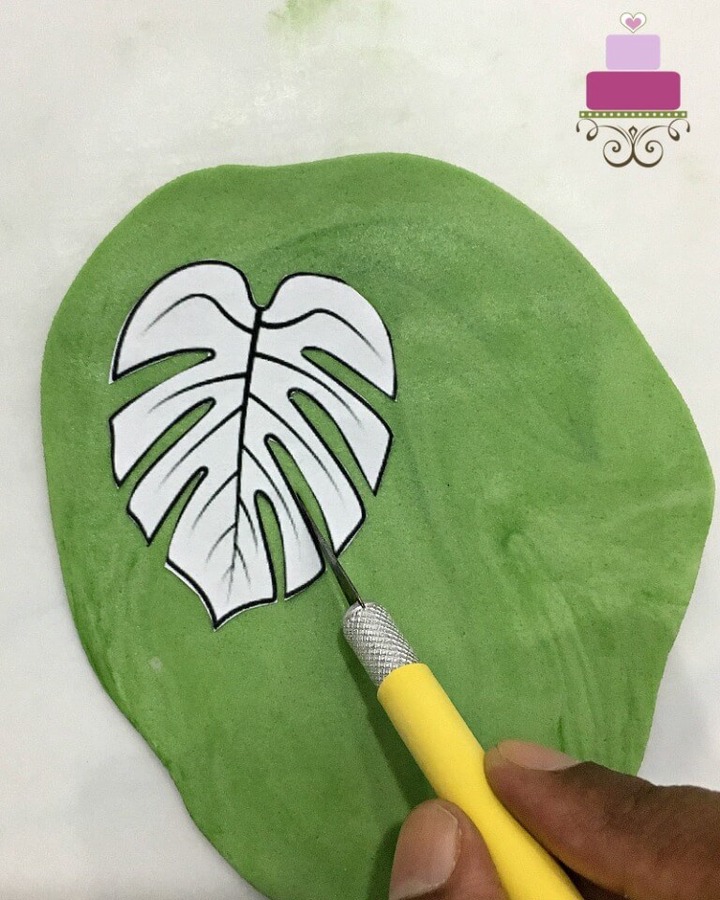 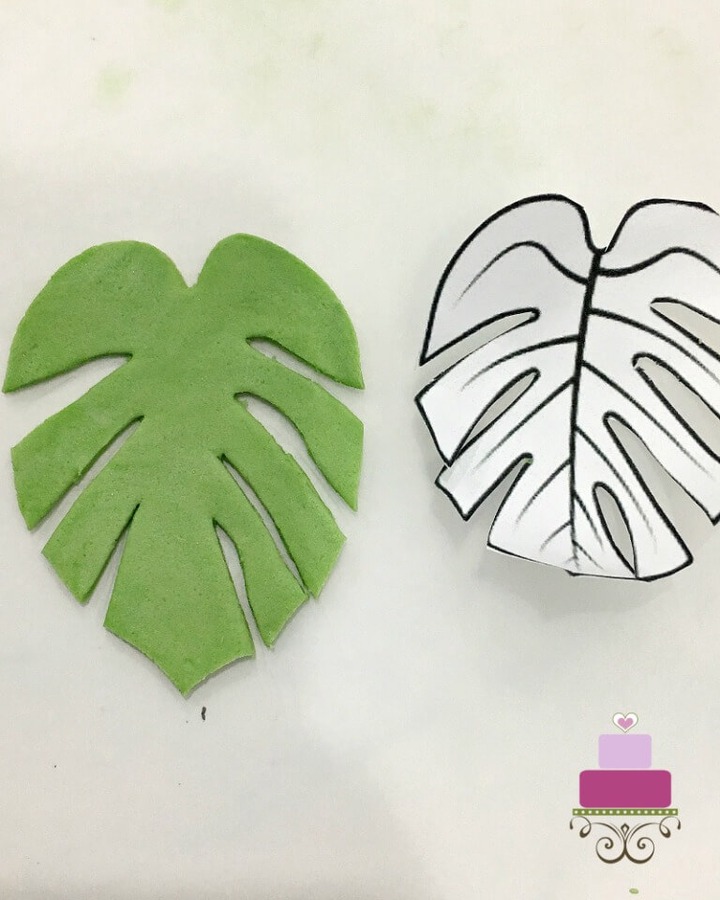 And then I used my sugar craft tools to draw the veins on my leaves. 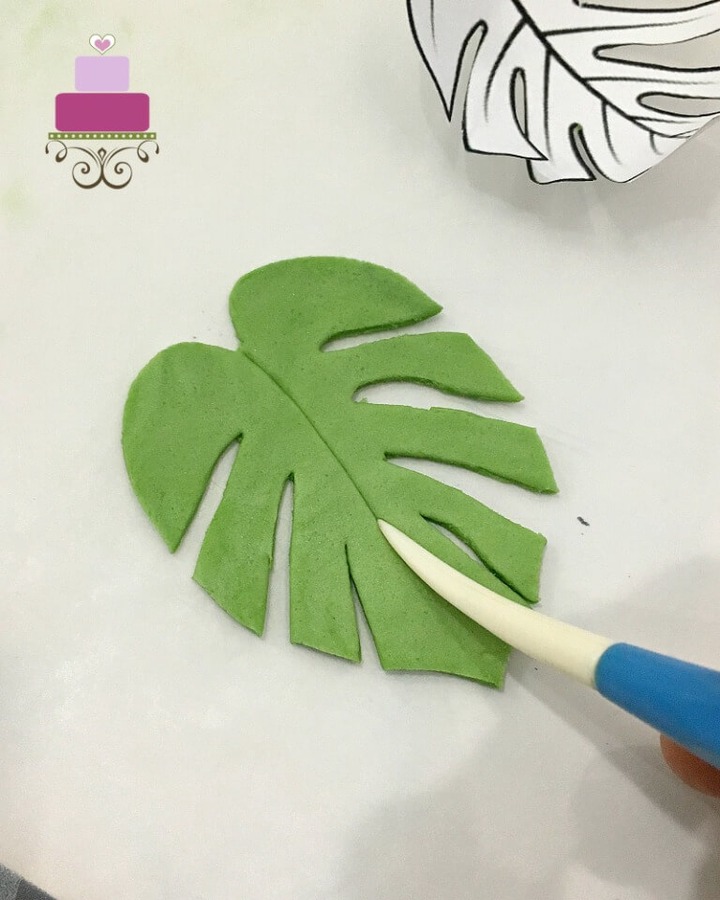 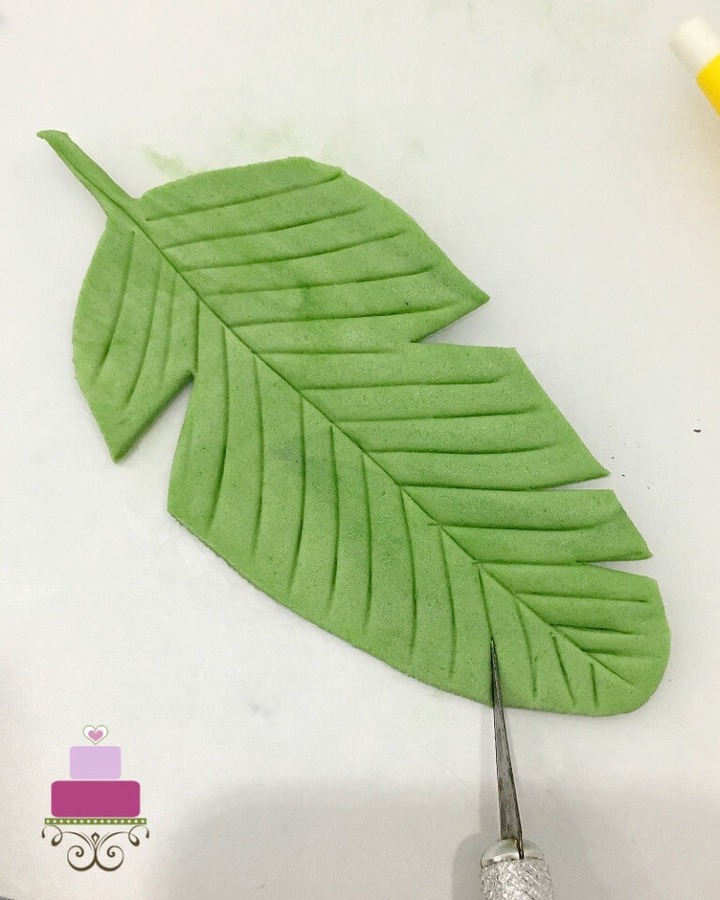 Once I had all my leaves cut out, next was painting them. You don't have to paint them if you choose so, but painting gave the leaves a bit of depth so I used my green gel food color and painted the centers. I diluted the food color with some water so that the color was not too concentrated. 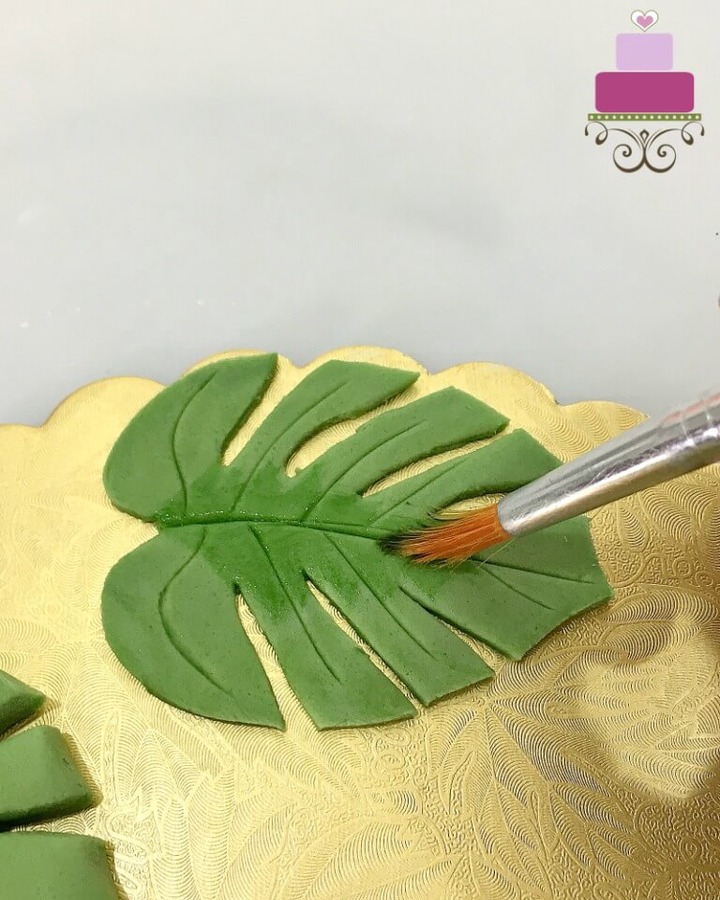 I then let the leaves aside for the paint to dry. I kept them covered as I did not want the fondant to dry out completely.

As for the leaf topper on the cake, since it was going to be placed upright on the cake, I added some CMC into the green fondant before cutting the leaf out. And I also rolled the fondant slightly thicker than the rest. This was so that I could attach a toothpick to it. 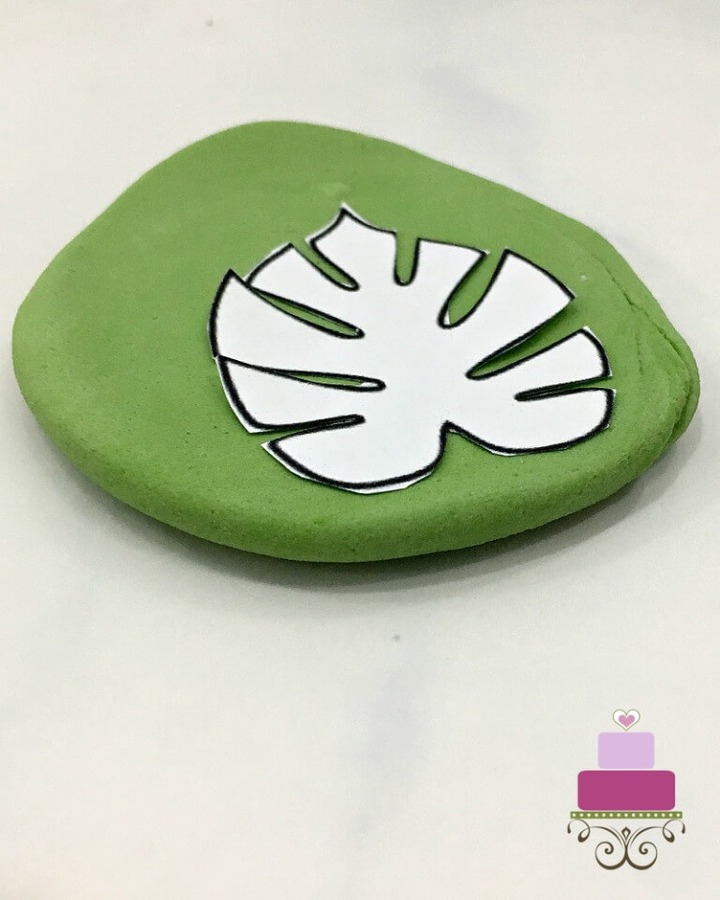 And because the leaf was thick, cutting it out with a sugar craft knife needed a bit more effort and I also had to smooth the sides of the leaf with my sugar craft tools after cutting for smooth edges. 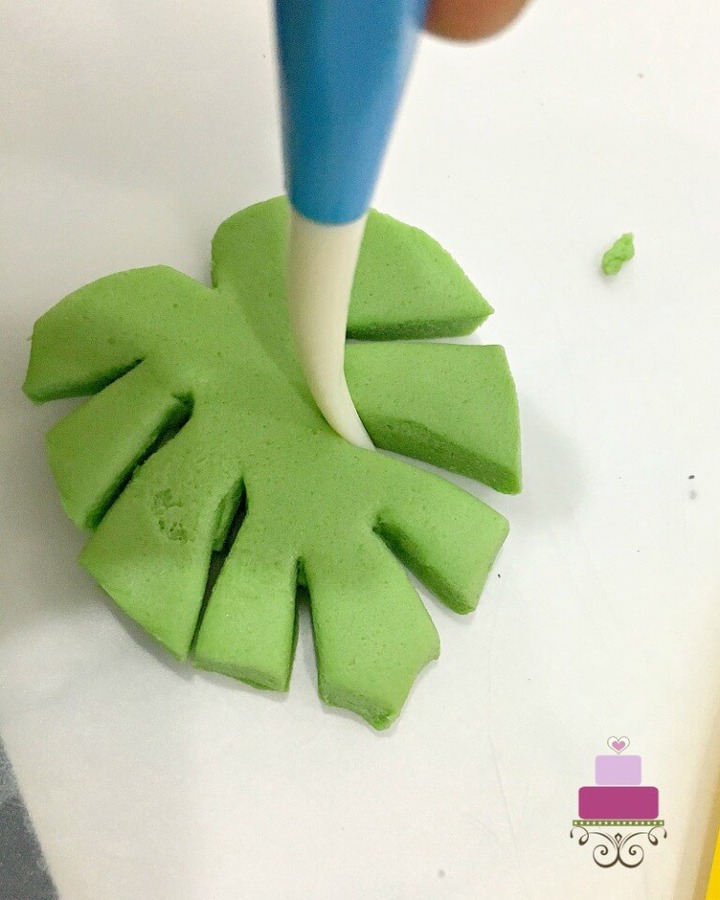 I then painted the leaf just like the other leaves and attached a toothpick to the bottom. I let this leaf to set and dry so that it could stand upright on the cake. 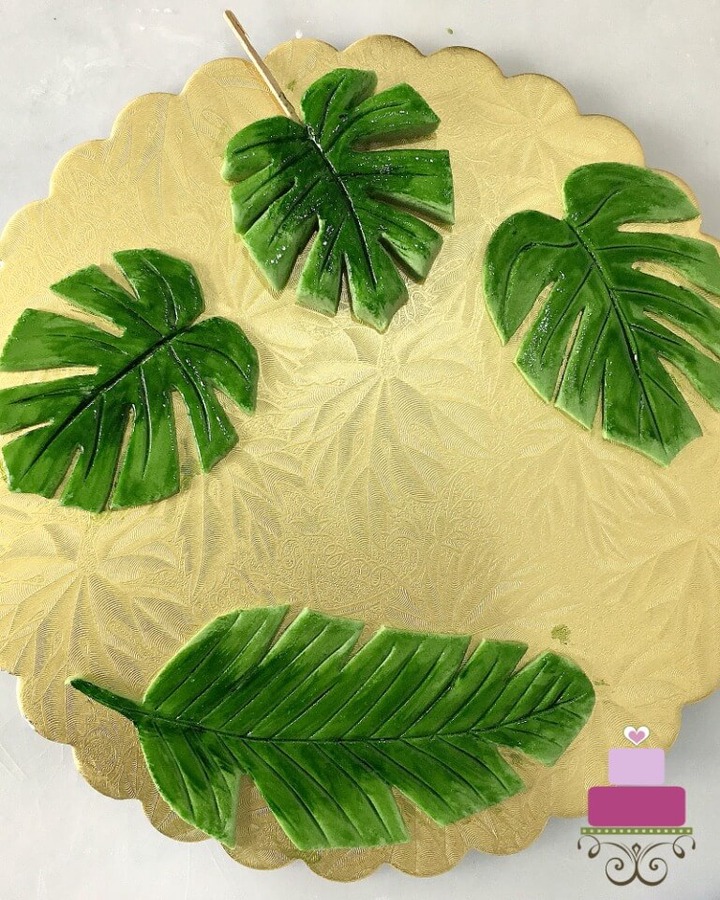 A day before the birthday, I baked the cakes. I let them cool completely, before leveling and layering them with buttercream.

I then covered and smoothed the entire cake with buttercream and piped a small rope border all around the sides with the star tip number 18. 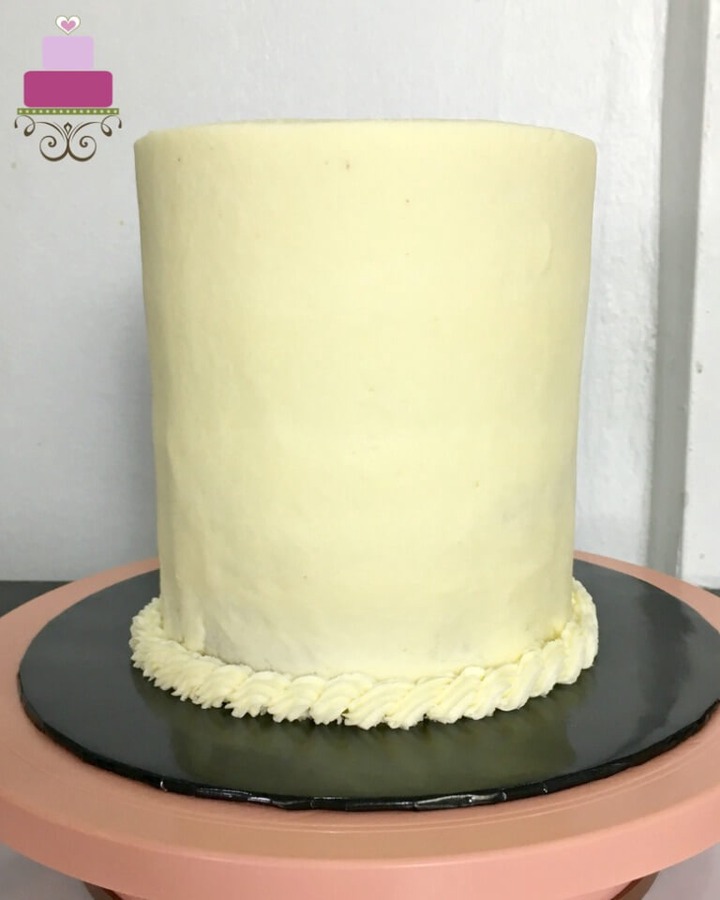 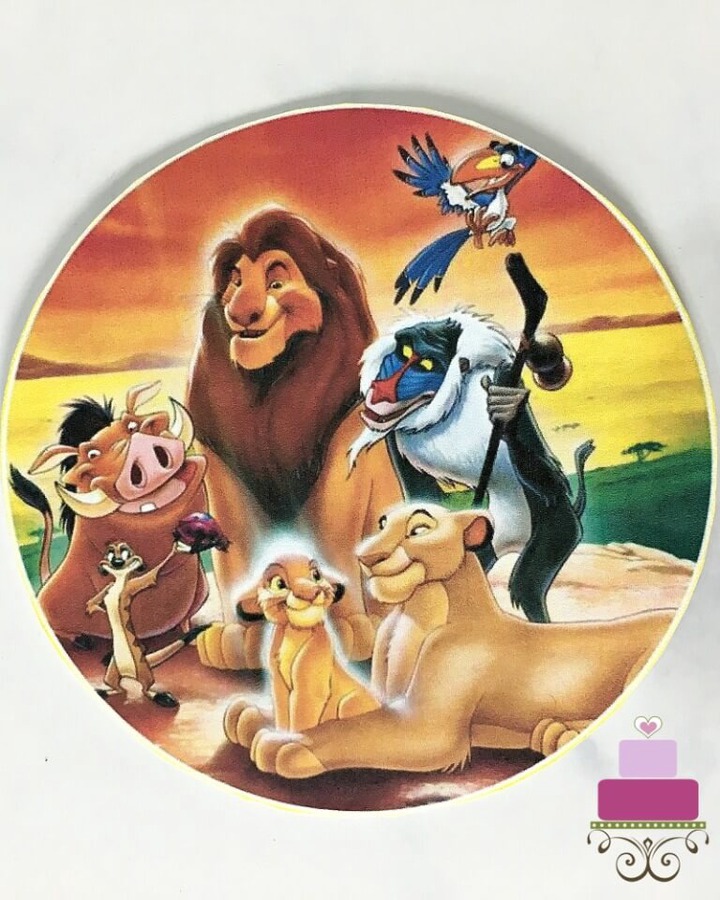 I wanted to image to have a thin black background so I rolled some black fondant thin, cut a circle out of it. I made sure the circle was large enough to fit the edible image. I then attached the edible image onto it with a damp brush. 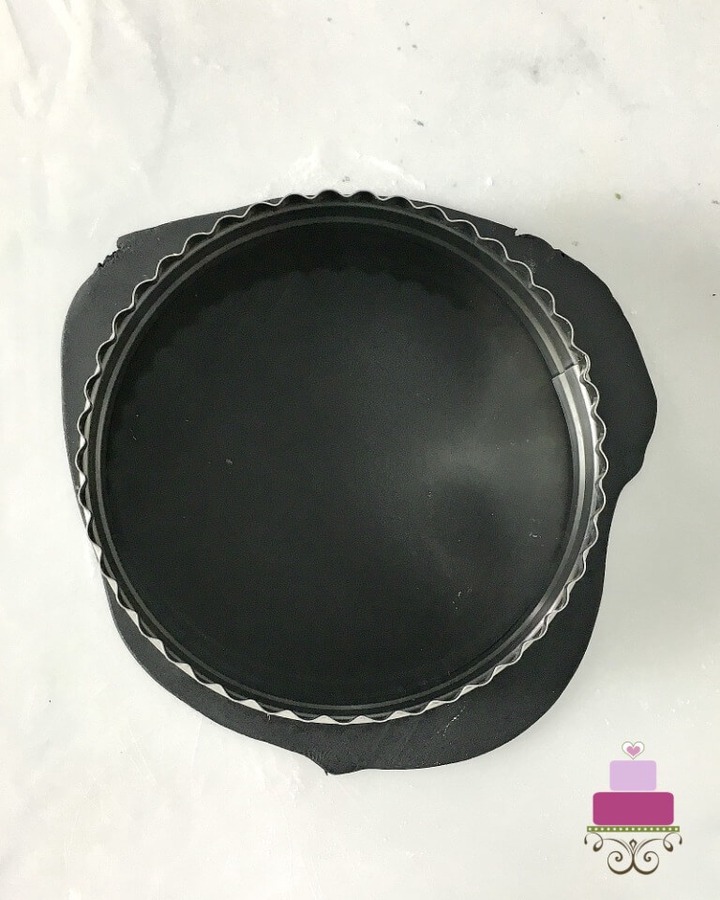 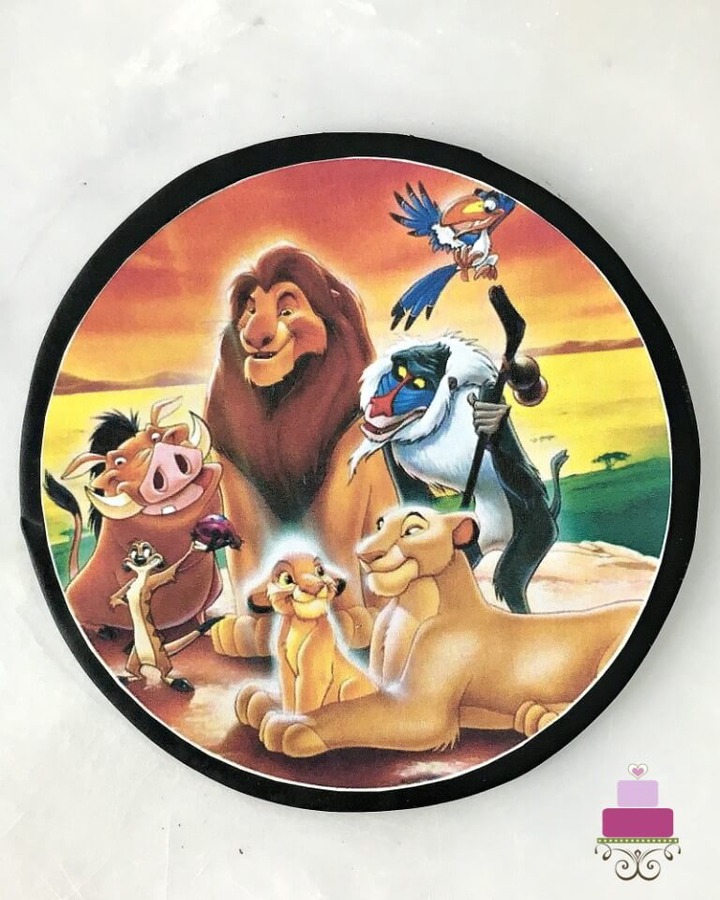 I attached the edible image (along with the black fondant background) onto the front side of the cake with some buttercream. 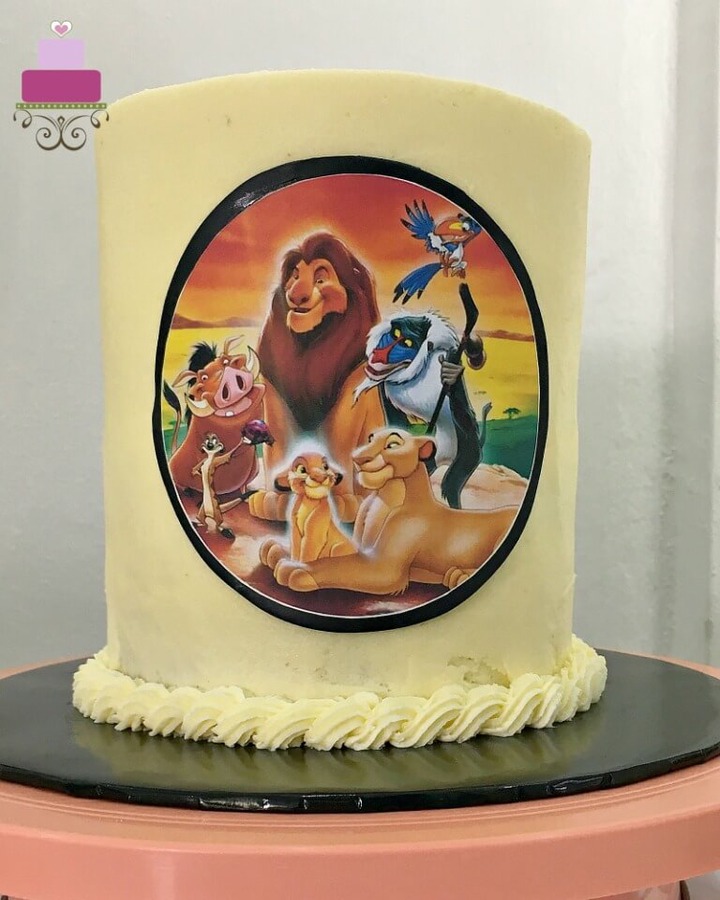 After that, I attached the 4 leaves around the edible image, 2 on the left and 2 on the right, as shown below: 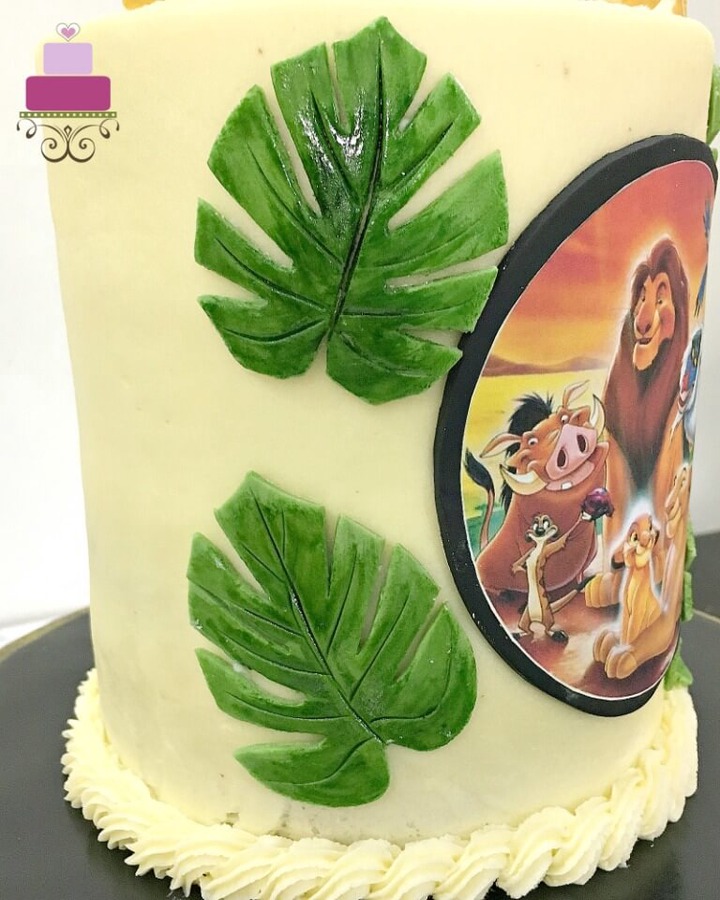 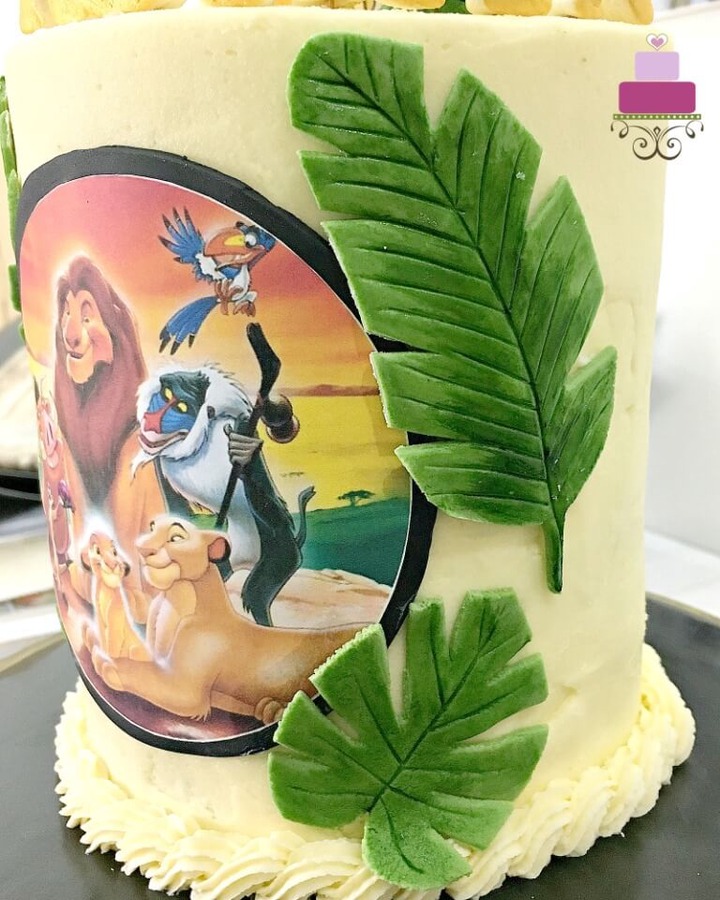 The Simba cake topper went on next followed by the leave topper. Since both these toppers had wooden picks attached to them, attaching these to the cake was just a matter of poking the picks into the cake. 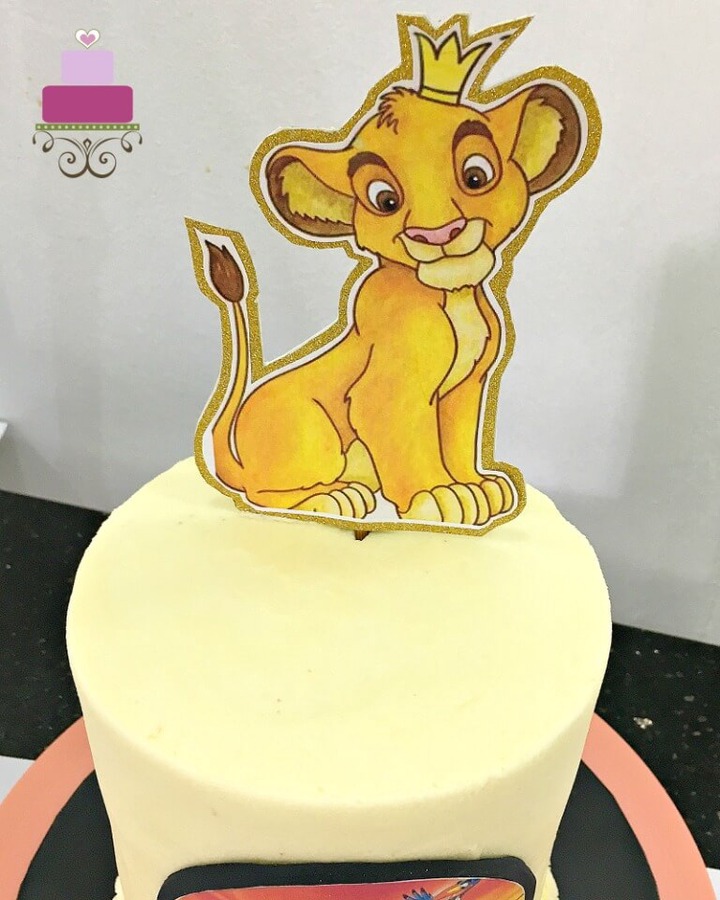 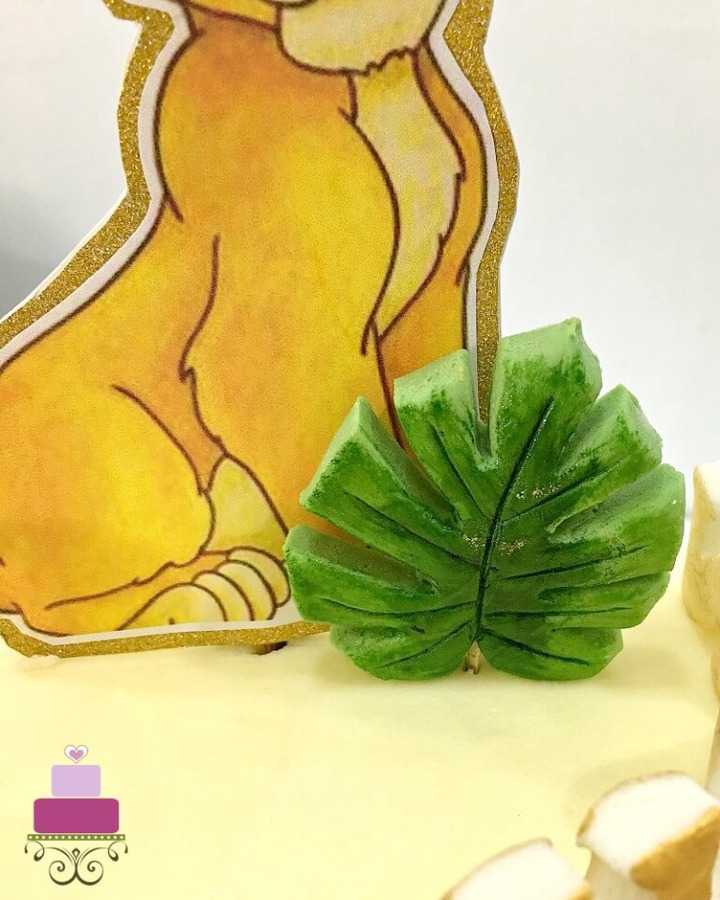 Next, I made the letters. I added my son's name in 3D block letters all around the front top of the cake. To make the letters, I kneaded some CMC into white fondant, rolled it to about 1 cm thick and cut the letters out using my alphabet letter cutter. For ease of attaching them to the cake, I inserted a toothpick into the bottom of each letter.

I then painted the front surface of each letter in gold, to match the gold border of the Simba topper.

I had to let the letters rest for a few hours to set and hold shape before I put them on the cake. I actually prepared these letters while waiting for my cake to bake, so right after adding all the remaining decorations on the cake, I was able to put the letters on. 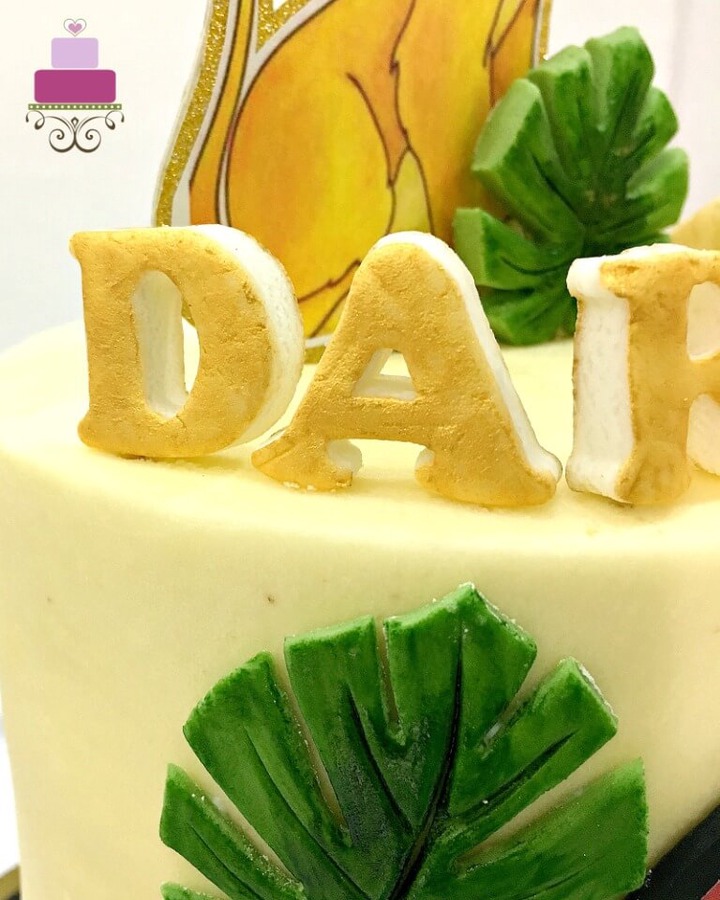 And with that, the Lion King cake was complete. My son was truly happy with his cake. I was happy to make him happy and I hope you will find this tutorial useful. 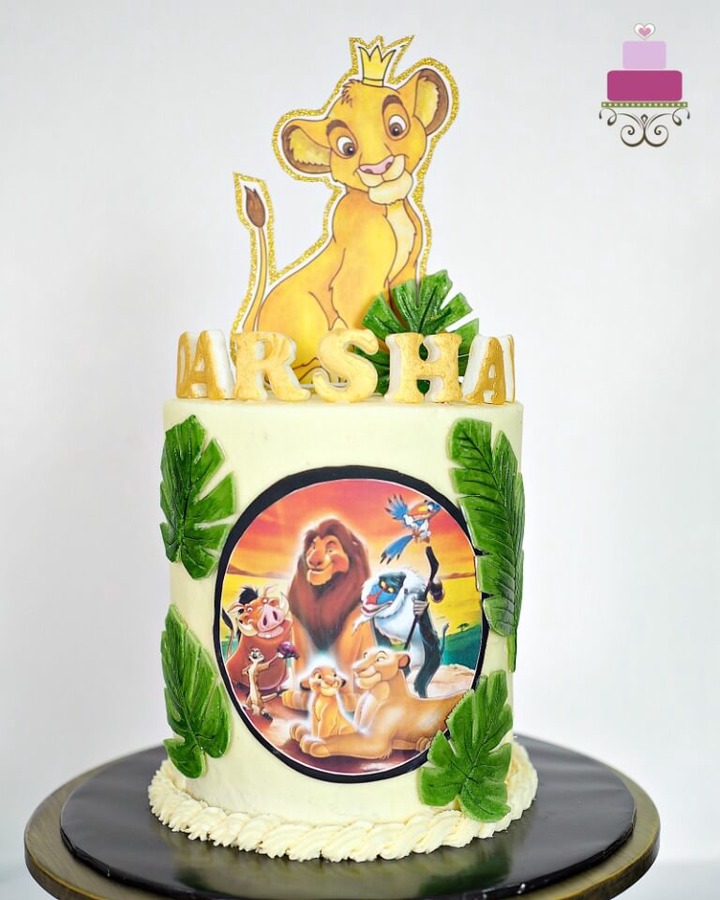 Content created and supplied by: Rose11 (via Opera News )