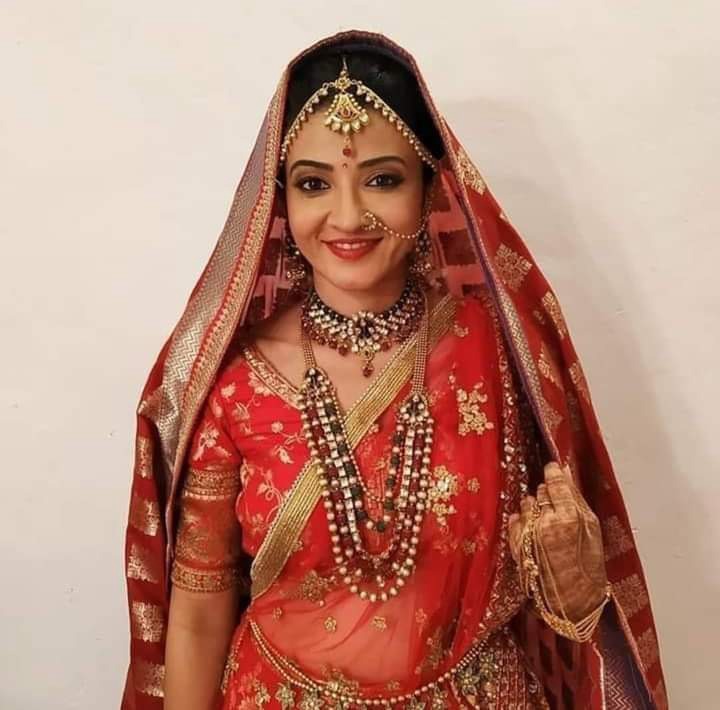 Anju looks around the crowd for Vaidika. She was worried and looks around in the house for her. She thinks there is something wrong for sure, someone must have said some curt words to Vaidika. No one at home cares for Vaidika, but this Bua does.

The bride and groom were asked to stand for wedding rounds. Sahil jumps to stand up at once, astonishing his parents. Vaidika’s mother asks her to stand up. Vaidika thinks she will get married if she takes the rounds, but can’t disclose being under the veil as well. Her parents would have to bear much disgrace else.

She wish Avantika returns soon and takes her place on the stage. Sahil holds Vaidika’s hand and pulls her up. The wedding rounds begin. After the fourth round, Pandit ji asks the bride to move forward. Vaidika withdraws her hand from Sahil’s hand. The guests still call her parents name of not bringing their daughters well.

Sahil takes the wedding rounds. He thinks he is unware why she took the decision, he only knows this had to happen. He will love her to an extent that she will never regret marrying him. Pandit ji announces the wedding is now over, the couple is now tied to each other for a lifetime. While putting on the mangal sooter, Sahil whispers that he is well aware it’s Vaidika under the veil.

Sahil hurries to apply the sindoor. Mina says I am shocked, the bride was changed. Manjolika arrives at the wedding, she was thankful and dances in excitement as the wedding has been complete. Sahil stands up with Vaidika’s hand in his, raising them victoriously.

Manjolika says they were companion in the last life, and were united once again. She longed to see this union and blesses them as a couple. Shashi shouts at Prem what this drama is, he tells Dheeraj to take this old woman outside. Rekha shouts that Sahil must surely be involved in all this.

Manjolika fells into Avantika’s feet. She laughs at Avantika who watches Vaidika and Sahil stand as a couple. Anju was happy that Vaidika got married, finally she might get some happiness in life. Avantika heads towards Vaidika and raises her hand to slap her. Sahil holds it in middle of air, and forbids her dare touch his wife.

He says Vaidika did all this, there must surely be some reason. He questions where Avantika had been, she was the bride after all and was out of the house. Avantika was unable to reply. Avantika says there was an emergency, she had to leave as her friend’s life was endangered. Avantika says she informed Vaidika, but she couldn’t handle the situation. Vaidika could have told everything to everyone here, but instead Vaidika got into the Mandap herself.

Didn’t she feel any guilt while stealing her sister’s groom, this must be the reason Vaidika didn’t want her to marry Sahil. She questions why Vaidika did all this, she could have demanded the parents to find a bachelor guy for her as well. Rekha announces she doesn’t accept this wedding, it’s a betrayal and untrue.

She complains to Pandit ji that this girl betrayed her son, they can’t accept this wedding. Sahil intervenes, but Rekha shouts at Sahil to shut up. Pandit ji clarifies that the couple took seven rounds around the pious fire. Rekha wanted him break this wedding right away. Sahil announces the wedding can’t be cancelled.

Rekha says a divorcee can’t be a daughter in law of Kashab family. She demands Sahil to swear to her head he would divorce this woman. Sahil wasn’t ready to accept the demand anymore. Rekha now clarifies to Vaidika she can’t be a bride to her Sahil, and this marriage is illegitimate. People there also call names to Vaidika and blame Vaidika’s character.

Vaidika finally speaks that she WAS a divorcee, but she isn’t a divorcee now. Now she is married, in front of everyone. She is Sahil Kashab’s wife now. She wanted to question everyone who gave them all a right to point fingers her over character and being a divorcee.

But now she has worn a Mangal Sooter, if she is respectable for them now. She then turns to Avantika, and asks if Avantika doesn’t want to know why she took this step and married Sahil. She can’t let her parents feel disgrace because of her foolishness. They are raising hands over her, and Avantika is also blaming her; it was Avantika who left her groom.

Does she want her to tell the truth in front of everyone, where she had gone and what she intended to do. Avantika steps away from Vaidika. Vaidika announces her decision that she is Sahil’s wife now.

Rekha says they don’t accept this wedding, they had come for Avantika. What did Avantika do that Vaidika had to take her place. Vaidika replies it’s a matter of sisters, no one has the right to know. The truth is, she is Sahil’s wife now not Avantika.

Mina says this new bride has such worse attitude. Sahil announces he has decided that Vaidika is his wife. He tells the guests to leave and have their meals now. He feels lucky to have married Vaidika, she is his wife and life partner now: Vaidika Kashab. Vaidika and Sahil look towards each other.

Shashi and the guests leave the wedding. Prem was left crying and pleading everyone. Later, Sahil asks Vaidika to go. Avantika snatches the Bidaai Thaal and attacks Vaidika. Sahil protects her and warns Avantika last time that no misbehavior now onwards.

At Kashab house, Rekha cries that she prepared for this wedding with so much love. Everything was ruined. Shashi says Sahil has gone crazy, he can’t allow Sahil to bring that divorcee into the house.

Rekha says Sahil is their only son, they can’t break blood relations like this. Mina says with a divorcee, their family will bear much disgrace and even Geet’s future would be in trouble. Sahil and Vaidika had reached the door.

Sahil tells Mina that Geet’s future is extremely bright, if she doesn’t interfere. Shashi was enraged. Sahil asks his father what he would do if he doesn’t leave Vaidika. He tells Vaidika he is a modern husband, he would help her with her GrahaPravesh. Vaidika doesn’t kick the rice bowl, Sahil does it himself rolling the bowl across the hall; and chuckles that he is used to playing football.

He holds Vaidika’s hand to bring her into the hall. Vaidika doesn’t look down and steps over the bowl of red water. Sahil cheers. Shashi warns Vaidika to step any further, there is place for girls like hers in their family. He orders her to Get Out! Sahil says he doesn’t want an argument with him, because none of their arguments had a result in past.

He is married to Vaidika now. It’s now his decision, if he wants him to stay in the house Vaidika would also live here; else both will leave. Rekha felt unwell and couldn’t get hold of herself. Sahil apologizes Vaidika and turns to leave, but Vaidika spots Rekha.

Everyone now rushes to Rekha who had collapsed at once. Vaidika runs her hands and while Sahil brings water for her. Rekha doesn’t take water from Vaidika’s hand. Vaidika asks Sahil to rub her foot while she herself rubs her palms. Rekha’s breathing come under little control, she felt relieved.

Rekha looks towards Vaidika’s face then sits up, withdrawing her hand from hers. Sahil tells his father that his wife saved mom’s life. Mina takes Rekha inside. Sahil says Vaidika has proven herself to be a perfect daughter in law, it’s an insult for her to be called as divorcee. Shashi was still stubborn that there is no place for them in the house.

Sahil apologizes and says they must not live here. Vaidika stops Sahil and says this is his family, they need him; he can’t leave his mother in such a condition. Sahil says he had fallen for her at first sight, and it seems this love would accelerate further now. He promises that he will make up the moods of their families. They walk inside Kashab house.

Back home, Avantika throws different items of the house, breaking and ruining everything. She takes a medicine from the fridge to gulp it. Arju slaps Avantika and shouts at her that this is an antiseptic, why is she fooling all of them. She questions where Avantika had been during her wedding, which of her friend is more important to her than her wedding.

She says Vaidika would never have to sit in Mandap, had Avantika never left. She says Vaidika saved their family’s grace. Whatever happened is for good, and its everyone’s fate. They looked really happy together, she had seen them at the time of Haldi function as well.

Their elder daughter had been extremely unhappy with her first marriage. Vaidika’s mother cries for the fate of her daughter, her in laws left her in the Mandap. Her Vaidika is unwelcomed even in her second home.