Top 5 Most Handsome Dad in Nickelodeon As we all know, Nickelodeon is a blossom entertainment network that provides incredible TV shows and concerts for every viewers. In this article, you will see the most handsome dad in every Nickelodeon TV series. 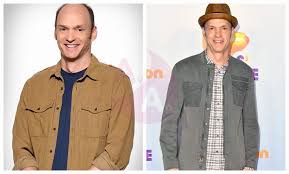 Brian stepanek ( also known as Tom Harper) the father of of the quadruplets (Nicky Ricky Dicky and Dawn) ranks as #5 most handsome dad in Nickelodeon. His bright eyes and smile put him in this chart. He is also the owner of the most popular sports store in Nickelodeon TV shows "Get Sporty". Scott baio (also known as David Hobbs) is the father of Emily, Joe, and their little baby girl in the Nickelodeon TV show "See Dad run". In the show he is known as no.1 America's Dad. He ranks as #4 most handsome dad in Nickelodeon. Chris tallman (also known as Hank Thunderman) is the super Dad of Max, Phoebe, Nora, Billy, and Chloe in the Nickelodeon TV show "The Thundermans". The ranks as #3 on the chart. He has a blue eye and blonde hair with a hilarious smile posture. Kel Mitchell (also known as Double G) is the father of triple G and a famous rapper in the Nickelodeon TV show "Game Shakers". Double G ranks as #2 most handsome dad because of his magnificent looks and hair cut. Jeffery Nicholas Brown ( also known as Jake Hart) is the father of of popular swellview superhero (kid Danger) and Piper Hart. Jake Hart ranks as #1 most handsome Dad in Nickelodeon. He has a role similar to Tom Harper and is recognized as no.1 clumsy Dad.