Hushpuppi Versus Ikorodu Bois - Who Would You Have Picked Three Months Ago To Be Your Role Model?

By Ayorkay (self media writer) | 1 year ago Hushpuppi was a social media platform celebrity. He was known especially on instagram for displaying pictures of himself enjoying life to the fullest. He buys latest cars and gadgets and fly around for adventures in private jets. He was a model to a lot of his social media followers who didn't know the real thing he does for a living. Now, Hushpuppi and his gang of cyber fraudsters have been apprehended. While the Europeans, Asians and Arabs are adept at this and most times they are untraceable. Hushpuppi and his gang were traced and arrested. They will now face capital punishment depending on where they are prosecuted. We can see how long they took to painstakingly gather evidence in a meticulous manner with a sense of duty and a commitment to work. Hushpuppi had a lot of innocent hailing fans who over the years become beneficiaries of him and his gang members online largessé. The big boy life both online and in real life. Ikorodu Bois on the other hand have also been hustling over the years doing what they know how to do best just like Hushpuppi and his gang. Now, they just earned an Invite from Russo Brothers, Chris Hemsworth after they made their own version remake of 'Extraction Trailer 1'. This invite is to the world première of Netflix action thriller, Extraction 2. They shared it on their twitter page with the caption: “We so much love this movie and we hope @chrishemsworth and @netflix sees this remake, pls retweet”. Then, the Russo brothers who were the producers. They both praised the remake and also invited them for the world premiere of the sequel of the film in the caption: “This is awesome! We would love to have you guys at the #Extraction 2 premiere…DM us and we’ll get you there!” Then, Chris Hemsworth, the star of the film, reposted the remake on his Instagram page thus: “huge shout out to these amazing young film makers @ikorodu_bois for recreating @extraction trailer shot for shot! I think your version might be better than the original !! @netflixfilm”. The director, Sam Hargrave also shared the video and wrote: “So awesome!! These amazing young filmmakers from Nigeria recreated the #Extraction trailer shot for shot. Such ingenuity!! Bravo. Link to their full-length original video on twitter in my bio. CHECK IT OUT! @netflixfilm @netflix @chrishemsworth #youngfilmmakers #cool #bravo #encore”And this was how the Ikorodu Bois gained fame for mimicking music videos and film trailers. But earlier in April, they have been praised by some other stars like the Spanish actor, Álvaro Morte, the lead character of Netflix Spanish drama series, Money Heist. The boys also earned recognition and praise from major Hollywood stars like Will Smith and Dwayne Johnson, also known as 'The Rock'. While some Nigerian citizens blamed Hushpuppi's actions on the government of Nigeria. That the government is doing enough, and that is why Nigerians are going abroad scamming and doing illegal things to survive. This may not be true because no citizen of any country is 100% satisfied with their leaders. They don't always get it right, but it is no reason to rob 1.9 million families and be flaunting ill gotten wealth on social media platforms. Although, we have a system that doesn’t care enough for her citizens, there by, everyone is left on their own to either make it by all means or any means. This Nigerians just don't want to join the queue of those hoping since 1960, following all the procedures yet die, unproductively. Now the government of Nigeria said this guys dent the image of the country globally. A look at the employment rate in the country, the social amenities ( such as good roads, 24/7 electricity and security etc ). If we try as much as possible to tackle all these by fixing up 'Nigeria' like every other countries we admire. Some countries pay their citizens, give scholarships, give cars to be paid by installments, houses too just because they are citizens. Some citizens even pay hospital bills by doing community cleanup works. So far as I know, these countries aren’t better than us in terms of money, human or other resources. They were only determined to make things work, and had the interest of every citizens at heart. We can also do these. The main point is, by the time we achieve this, our citizens wouldn't engage in this things again. It will be very infinitesimal compared to the countries we call developed. Because Africans don't really have the mind for crime if things are properly done. You can see this in the chart below with no African countries of more than 1 billion people there and USA with less than 400 million people topping the list. Picture: Hushpuppi before he became famous 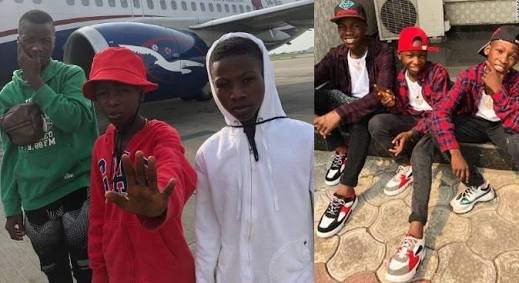 Picture: Ikorodu Bois before and after they were favoured by Russo brothers.

Back to Hushpuppi and the Ikorodu Bois, both of them will go to America. But one will go in chains courtesy of the FBI and INTERPOL and he will spend probably the next 30 years in prison. Every single item he owns will be confiscated as "Proceeds of crime". If he makes it out of jail alive eventually, he would come out penniless all those images of luxury would be like a dream from another life. If it is at Dubai, then, there is problem for them, we may consider them dead "in advance". The other group, the Ikorodu Bois will go to America courtesy of the production company of the movie, "Extraction". They would be at major Hollywood events related to the movie, a movie which they remade locally to become an internet sensation. And they may likely get their own Hollywood break in a multi million dollar movie of their own. If only in the last two months ago, someone asked one thousand Nigerian youths if they will like to be like Hushpuppi or the Ikorodu Bois? We all know the answer, but hardwork and positive use of talent has paved way for "real wealth" and success for those boys. Nigerians are really blessed with talent, use yours positively.