Photos Of 16 Celebrities Without Makeup 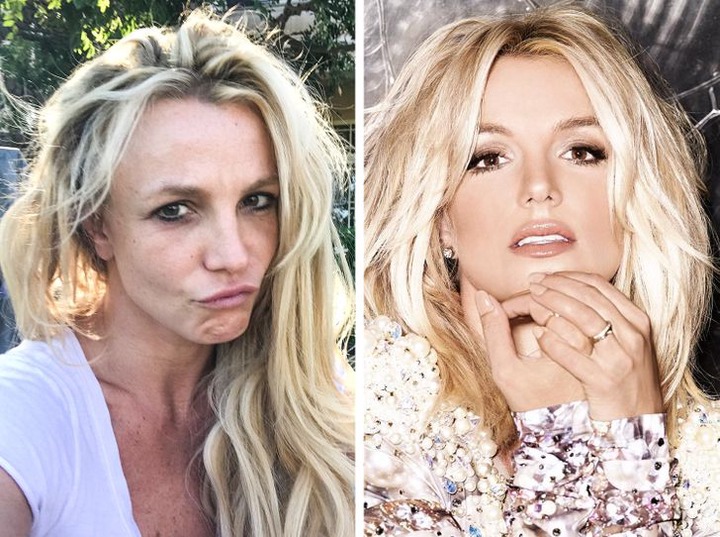 Here are some of our favorite stars who decided to face the camera without makeup. We have photos of them with makeup and without makeup so that you can compare them. Do you think they look recognizable? Let’s find out!

When she’s not saving the world as Wonder Woman, Gal Gadot prefers to spend her time with her 2 daughters. Though unrecognizable compared to her Wonder Woman persona, Gal still looks stunning in this photograph while watching The Cat in the Hat with her daughter.

Jennifer Lopez, or J.Lo as many of her admirers call her, is a woman who wears many hats. She is an actress, singer, dancer, and fashion designer. In this photograph, we can see her sans makeup before a stage show. Who looks more beautiful: J.Lo with makeup or J.Lo without makeup? It’s hard to say!

The “Princess of Pop” is considered a pop icon and is credited with the revival of teen pop. While we seldom get to see her without makeup, it appears she prefers to stay without makeup at home. Still pretty glamorous, isn’t she?

The winner of 3 Grammys, Carrie Underwood is a unique combination of beauty and talent. Although unrecognizable due to the absence of makeup, she looks gorgeous in this photograph while sweating it out at the gym.

As one of the most popular supermodels of the 1980s and 1990s, Cindy Crawford has been featured on the covers of the most prestigious magazines including Elle, People, and Vogue over 500 times. It is, therefore, almost impossible to imagine that she ever gets to remove her makeup. Luckily for us, she shared her post-spa photograph.

Drew Barrymore likes to keep it as real as possible when she is not filming, and this is not the only instance of the camera capturing her without makeup. Without it, she is certainly cuter than her sexier with-makeup persona.

The mother of dragons, sans all the makeup we are used to seeing her in!!

Tyra Banks has been ranked as one of the most influential people by Time, and not without reason. It is this strength of hers that helped her decide to share a completely makeup-free selfie on Instagram. While she might think that people will consider the selfie “rough,” we certainly think otherwise.

A sex symbol in her own right, Sharon Stone manages to look equally stunning even without makeup, even though she’s a little unrecognizable.

For someone who has been used to getting all glammed up since the age of 13 and who also happens to have her own beauty brand, it is surprising to see her without makeup. Yet she looks every bit as beautiful as always.

When it comes to makeup, Lady Gaga is a chameleon. Her style might sometimes be liked and sometimes despised, but there is no arguing that we all love her even when she is makeup free.

After following an extensive makeup routine for her role as Neytiri in the movie Avatar, it is not surprising to see her trying to avoid makeup. But we really want her to get back to her role for the sequel, Avatar 2.

When someone looks so beautiful even without makeup, it’s understandable that she is regularly featured on various “most beautiful people” lists. But, surely, if we were to meet her without makeup on the streets, it would be really hard to recognize her.

While people tend to put on all sorts of makeup to look their most beautiful on their birthday, Gwyneth Paltrow chose to go the other way. In this photograph, which was shared on her 44th birthday, we must agree that she looks different but extremely graceful.

Another girl trying the makeup-free birthday look!! No matter how much or how little makeup she wears, Shakira still manages to look glamorous.

Really? Is that Selena Gomez or the beautiful girl next door returning home after a fun night out?

Do your favorite celebrities look recognizable without makeup? Who do you think appears almost unrecognizable when abstaining from makeup? Let us know in the comments below.

Content created and supplied by: ewhomas24 (via Opera News )