By DebbyJ_writes (self media writer) | 9 months ago 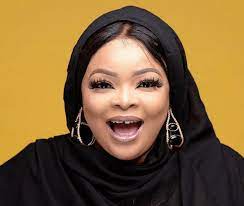 INNOVATIVE AND AWARD-WINNING After a short absence, Nollywood actress Dayo Amusa has returned to the recording studio booth.

Amusa appeared to have returned to the studio in a new move to reawaken her dormant talent.

The singer recently shared a video of herself recording a new song in the studio. According to the actress, the song is called "Rich and Famous."

Amusa also teased that her single and upcoming Extended Play would be released soon (EP).

Amusa began her career in Nollywood in 2002. She has worked as a film producer, director, school administrator, and television personality. She primarily appears in Yoruba-language films, but she also appears in English-language films on occasion. Ajegbodo, Oju Awo, Ekan Soso, Oogun Mii, Dewunmi Iberu, Inu, Idaa, Aroba, Unforgivable, Pathetic, and Omoniyun are among her films.