Is Donald Trump Addicted To Gold? Check Out These Pictures Of His House

Is Trump addicted to golds?

As you will see in the pictures, the interior of Donald Trump's tower penthouse contains mostly of golden furniture. Before I take you to the ride, let's first talk about Donald Trump.

Donald Trump is the 45th and current president of United States. He was a businessman and television personality before entering politics. His current (2020) net worth is 2.1 billion USD.

To see how successful he has been, from centillionaire to billionaire and now President of the United States, he has just as expected become the subject of much worldwide attention since his inauguration. However, Donald Trump, a businesman started making headlines even when he was an entrepreneur, with well valued assets such as his three-story New York Tower Penthouse, which he valued at 200 million USD.

According to Forbes, the property span 10,996 square feet and 3 floors. Trump acquired the property piece by piece, starting with a triplex apartment when Trump Tower first opened in 1983. It was later expanded, merging it with pieces of two of his neighbours apartments. In 2017. According to Forbes the property was valued at $64 million. "I own the top three floors - the whole floor, times three!" Forbe told the magazine.

Let's talk about the golden Interior.

Trump's neighbours have included famous singer, Michael Jackson, to whom Trump leased a space in his penthouse at some point during his ownership in the past. Decorated with 24-karat gold and marble elements in the style of Louis XIV, the penthouse is connected by a private elevator to Trump's office on the 26th floor. This was Donald Trump's remark to the biographer in 2014 "This is a very complex unit, building this unit, if you look at the columns and the carvings, this building, this unit was harder than building the building itself"

Louis XIV is not the only historical character that comes to mind when you see the photos of Donald Trump’s penthouse interior. Reminiscent of Midas, a King from ancient Greek mythology who had a love affair with everything made out of gold, and who ended up turning everything into gold with the power of his touch - which proved to be his ultimate undoing.

A fine example of the modern day royalty, Donald Trump also likes gold. Nearly everything in the penthouse from the platters and vases to the lamps and even the crown moulding is accentuated with 24 karat gold that offers a gorgeous backdrop to some of Trump’s favourite classical art and décor.

Without shying away from personal touches like family portraits and crested pillows, the home has a strong Greek influence with Athenian style vases, a bronze statue of Eros and Psyche, one of the great love Greek love stories. A comparison with the king of antiquity is apt - classical art dominates the penthouse. There is a painting on the wall where Apollo is led in his chariot by Aurora, the Greek goddess of the dawn, suggesting Trump sees himself the mould of the Sun God Apollo, Zeus’s son, and one of the most powerful of the gods, making another perfect historical allusion.

There is also family time with a portrait, which appears to show his father Fred Trump, and possibly his siblings. His father also features on the central table, while the choice of book - Muhammad Ali’s Tribute Book is expensive, and is worth $15,000.

The lounge room exudes perfect symmetry: candelabras, two candy bowls, as well as a Vogue and Vanity Fair book are placed strategically on each coffee table. A massive candelabra on the ceiling is another classical reference. The chairs are, of course, Louis XIV inspired, in common with the apartment. Donald and Melania’s breakfast room is packed with intricate details including a gold rimmed glass of orange juice sitting on top of a gold tray, a gold-rimmed tea cop, and an antique clock. The furniture also belongs to Louis XIV Imperial French style.

There is a fountain in the background of Trump's sitting room behind a semi-circle, ivory couch. A crystal chandelier lights up its beauty as it is planted on the tableau ceiling above. It shows a scene of Greek, or perhaps Roman gods, and seems likely to be Apollo again, who is often portrayed crossing the heavens in his chariot.

Melania's office is neat and well-organised. A Louis Vuitton case of jewellery that has a price tag of nearly $10,000 sits on couch containing Melania’s grand jewels. President’s wife designs and sells a collection of watches, rings, bracelets and earrings for QVC. They all feature her signature ‘M’. Her style mimics pieces that she herself owns such as the sun design flower earrings and a gold-linked watch. She often uses mother of pearl and pave-style crystal accents in her watches.

A reproduction of Renoir's ‘La loge’ painting is hung from the wall above the couch. The original is in the Courtald gallery in London. La loge means the theatre box, and some art historians argue that the woman represents a mistress rather than a wife being taken to the theatre. Renoir painted it aged 33, when he was in dire poverty, and it was exhibited in 1874 at the first Impressionist Exhibition in Paris. The exquisite desk is fashioned in classical 17th century French fashion.

Still to this day the primary residence of the Trump family, their penthouse sits just a few blocks south of Central Park, near the flagships of Harry Winston, Louis Vuitton and Tiffany. Trump Tower was also featured in The Dark Knight Rises where the building was used as a headquarter for Wayne Enterprises, Batman's holding company. Located 58 stories high, the penthouse offers a view across New York City and New Jersey.

Currently valued by Forbes at $3.1 billion, Trump serves as the United States' 45th president since January 20th 2017. Having sparked controversies throughout the world due to his polarising views on a number of domestic and foreign issues, he has recently led a series of reforms to have US conglomerates bring back a large portion of their cash back to the United States.

After getting a start at his father's real estate development company, Trump started his Manhattan real estate crusade, acquiring part of the Commodore Hotel in 1978. Following this, Trump embarked on building Trump Tower, which was completed in 1983. Five years later, Trump bought the Plaza Hotel for $407 million and invested $50 million into its refurbishment. At the same time, Trump started branching out of Manhattan, building in Palm Beach, Atlantic City and ventured int golf.

Now feed your eyes with these golden pictures of the interior of Donald John Trump's Tower Penthouse. 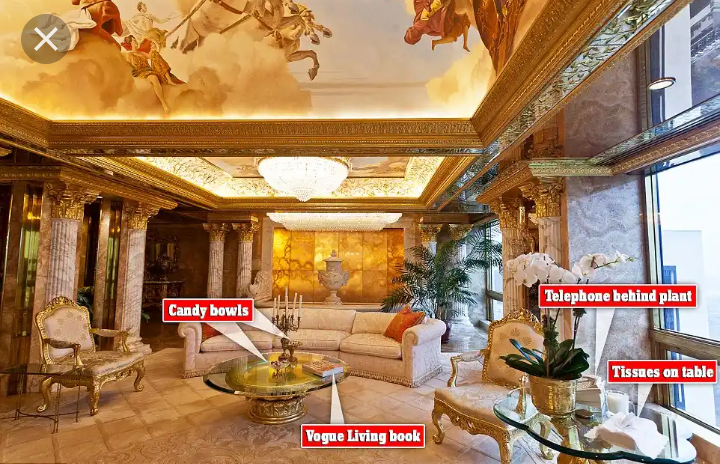 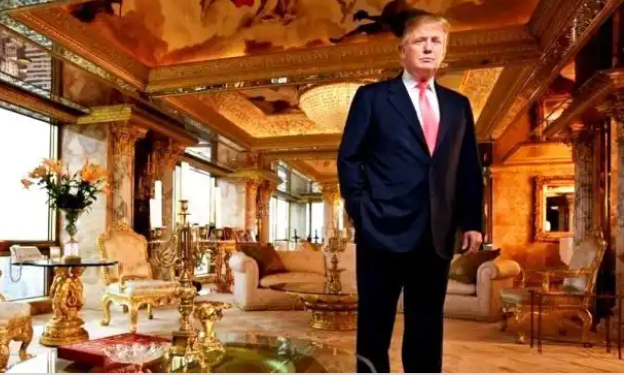 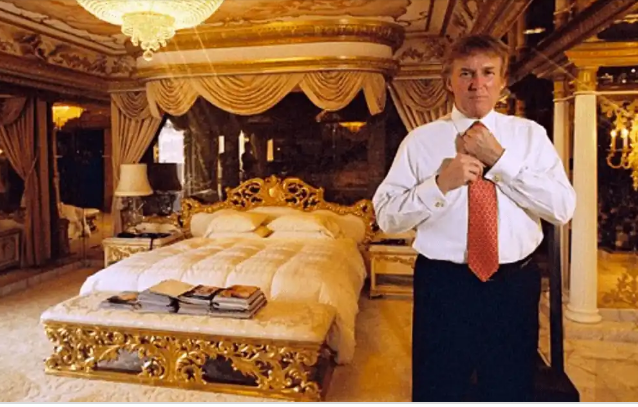 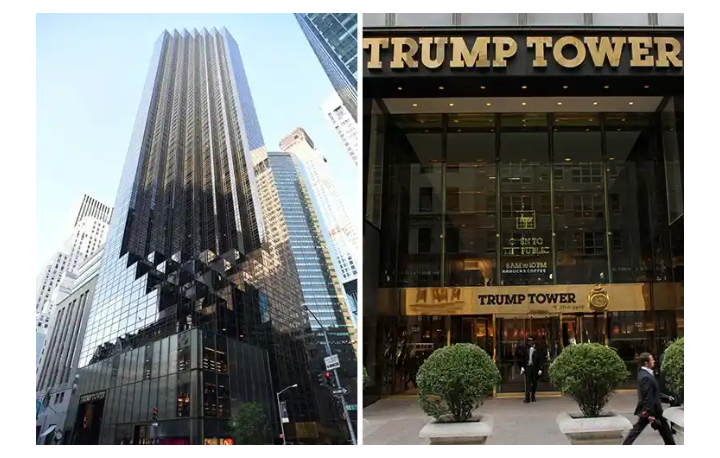 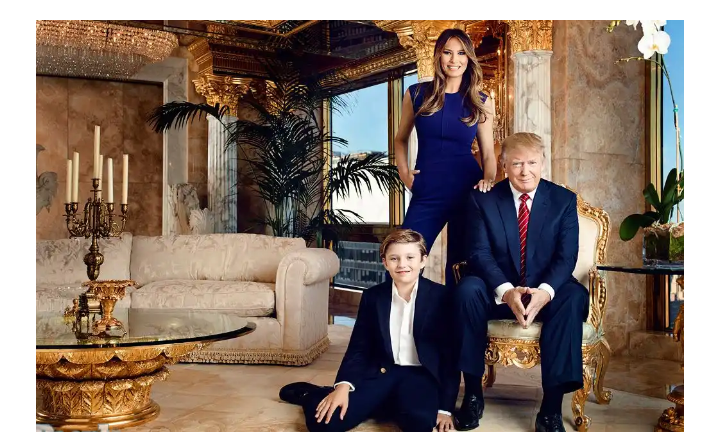 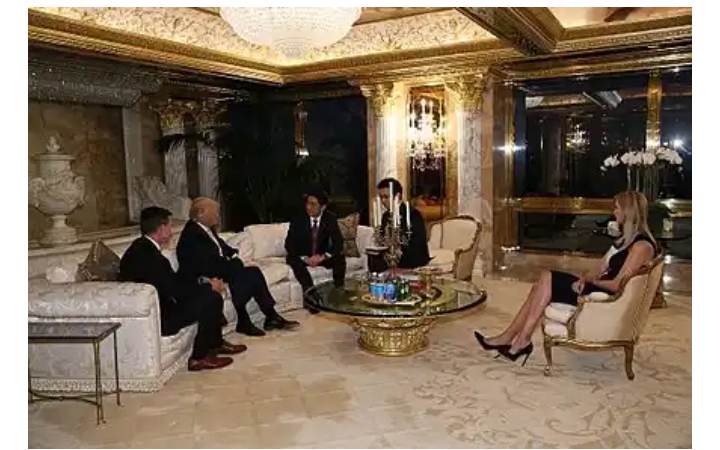 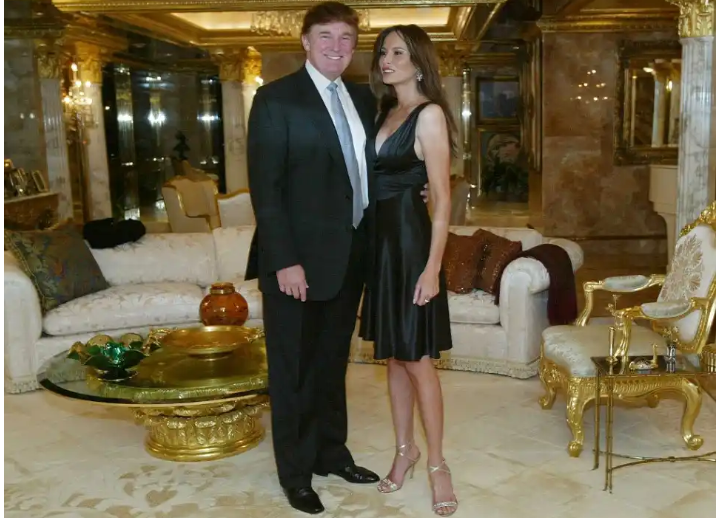 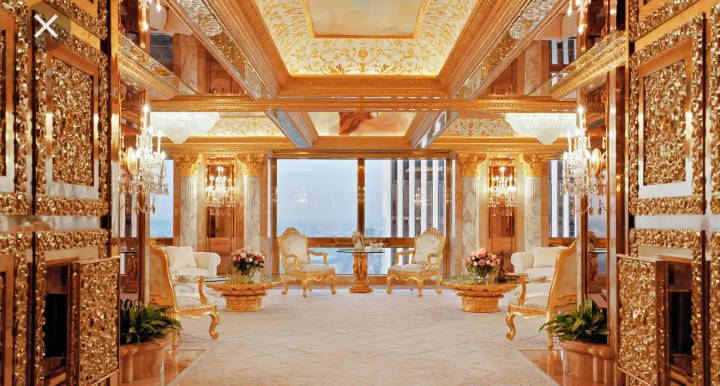 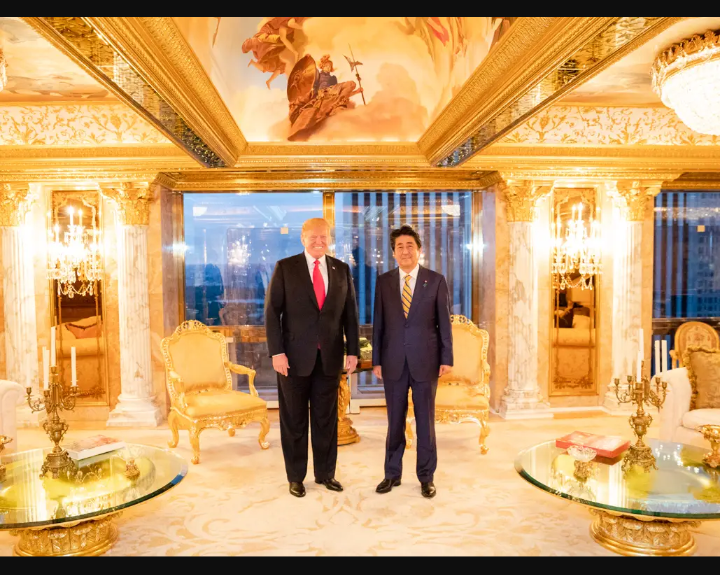 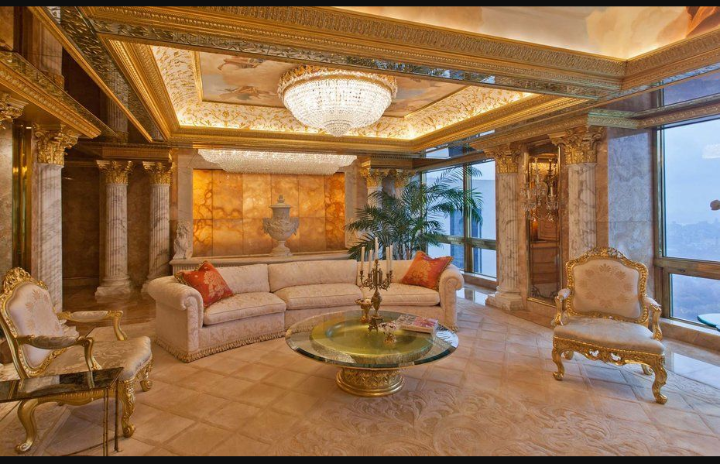 Money is good my people. We all need to hustle smartly to make it in life.

barca latest news happy new message to my love lasisi nigerian minimum wage unical departmental cut off mark
Opera News is a free to use platform and the views and opinions expressed herein are solely those of the author and do not represent, reflect or express the views of Opera News. Any/all written content and images displayed are provided by the blogger/author, appear herein as submitted by the blogger/author and are unedited by Opera News. Opera News does not consent to nor does it condone the posting of any content that violates the rights (including the copyrights) of any third party, nor content that may malign, inter alia, any religion, ethnic group, organization, gender, company, or individual. Opera News furthermore does not condone the use of our platform for the purposes encouraging/endorsing hate speech, violation of human rights and/or utterances of a defamatory nature. If the content contained herein violates any of your rights, including those of copyright, and/or violates any the above mentioned factors, you are requested to immediately notify us using via the following email address operanews-external(at)opera.com and/or report the article using the available reporting functionality built into our Platform

After My Friend Bought Her Boyfriend Singlet and Boxer For His Birthday, This Happened 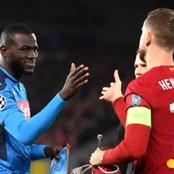 After 30 Years, Coming To America Part Two Is Finally Out. 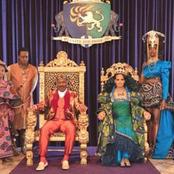 Chelsea 'confident of winning the race for Erling Braut Haaland' 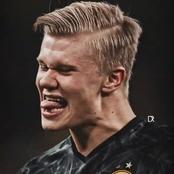 PL coaches that were players of the club the coach 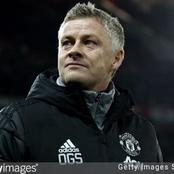 Meet "Beverly Tlako", The Actress And Business Woman Who Is Making Waves Online 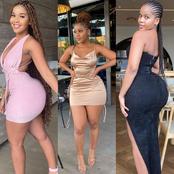 Chelsea goalkeeper has set a fantastic EPL record, as he becomes the first to reach this milestone 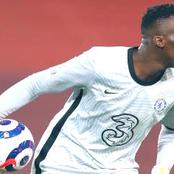 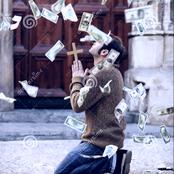 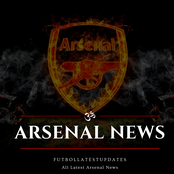 The Latest Captivating Ankara Style And Creations For Women 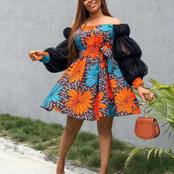