How Much Is Rapper Rick Ross Worth?

By ONTOP (self media writer) | 1 year ago William Leonard Roberts II, better known as Rick Ross, may have gotten his start as a rapper but has since expanded his reach as an entrepreneur, writer, and founder of his own record label, Maybach Music Group (MMG).

With his hands in so many different pots, just how much is 44-year-old rapper Rick Ross worth and how did he get to where he is now?

Rick Ross was inspired by the drug dealer lifestyle 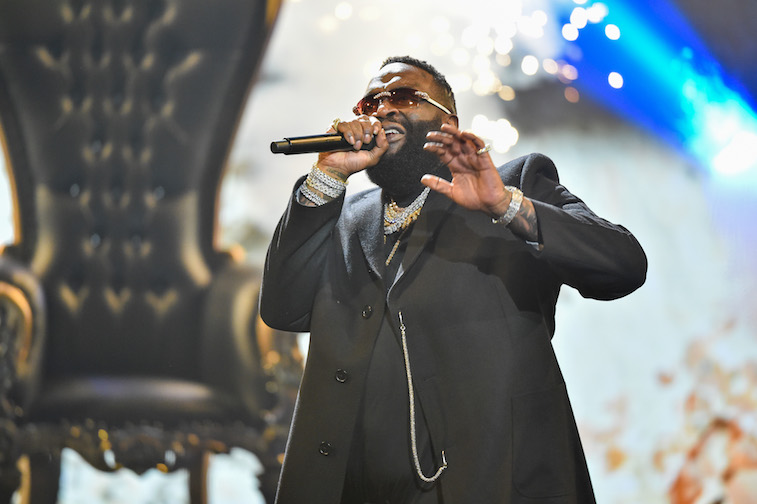 Ross was born in Mississippi in 1976 but grew up outside of northern Miami in Carol City, Florida. Despite spending two years working as a correctional officer (a claim he initially denied), Ross was enamored with the lifestyle of drug dealers, naming himself after drug kingpin “Freeway” Ricky Ross.

Freeway apparently wasn’t flattered and sued Ross for $10 million for taking on his persona. After a three-year battle, however, Freeway lost the suit and Ross was able to keep his chosen name.

The lawsuit wasn’t the first or last of Ross’ legal trouble. He’s been arrested several times for drug charges, weapon possession, and even assault and kidnapping in 2015. He served only probation for those charges.

Despite his legal troubles and various controversies and feuds, Ross became a successful rapper, thanks in no small part to his persona and his rap lyrics to match.

Rick Ross has been nominated for several Grammys

Ross has been busy in his years in the music biz. He has over 10 albums and several Grammy nominations in categories such as Rap Song, R&B Song, and Rap Album. He also regularly does collaborations with the likes of Drake, Jay-Z, Kanye West, and DJ Khaled, to name a few.

His most well-known song, the one that skyrocketed him into fame is “Hustlin'” with the recognizable repeated line, “Every day I’m Hustlin’.” It was this song that got the attention of Jay Z and Def Jam Records and lead to official and unofficial remixes with several other famous rappers.

Ross didn’t go on a spending spree when he became famous, and instead, he saved and planned.

“My mind may have been on something bigger. I just wasn’t sure, so when you’re not sure, the best thing to always do is just save, just stack, and that’s what I did. I didn’t buy an automobile, I didn’t buy anything,” the rapper said.

He had watched his mom invest in real estate and followed in her footsteps. He also began purchasing restaurant franchises. By 2017 he had purchased at least 30 Wingstops. He’s a firm believer in empowering his inner circle and his mom and sister run some of his businesses.

Ross also owns a Checkers franchises in his home town, has a lot of real estate investments, and his own line of styling products.

In 2015, Forbes ranked Ross as number 16 in their list of the world’s highest-paid hip-hop acts, and put earnings for the year at $9 million. According to the website Celebrity Net Worth, today he’s worth around $40 million.

Ross, whose Instagram name is “richforever,” didn’t save and plan forever. He now lives in his lavish mansion in Atlanta, formerly owned by professional boxer Evander Holyfield. The mansion has a large swimming pool, several garages to hold his half a million dollars worth of vintage cars, and over 100 rooms. Some of the rooms include a theater, bowling alley, and arcade, as well as several closets exclusively full of rare and high-priced sneakers.

As of his January 2020 interview with Complex, Ross said he’s still learning about the mansion and isn’t sure what his favorite part of it is. He said it could take a lifetime to enjoy.

Content created and supplied by: ONTOP (via Opera News )