By nicnews (self media writer) | 10 months ago 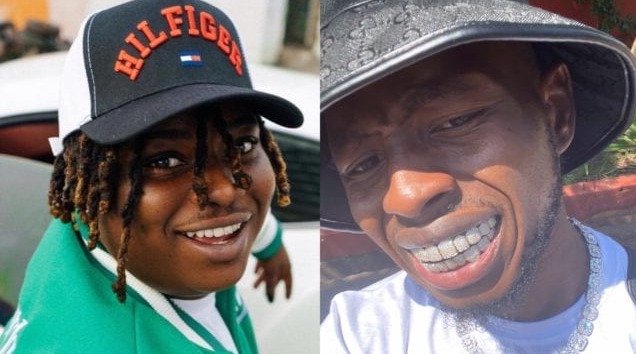 Nigerian singer, Oluwakayode Junior Balogun, popularly known as Barry Jhay has come out to detail his experience after he was arrested on suspicion of murder following the tragic death of his record label boss, Kashy Godson.

Recall that last week, Barry Jhay was arrested by police in Ghana following the death of Babatunde Oyerinde Abiodun aka Kashy Godson.

While some alleged that he jumped from his house balcony after battling depression for a long time, others alleged he was pushed off the building by someone he had a business transaction with.

According to reports, Kashy was allegedly involved in a brawl with his label signee, Barry Jhay just before the ugly incident occurred.

"Barry Jhay and Karshy had a fight in Ghana over accounts and other label-related issues in Ghana. When the argument got heated, Karshy punched Barry Jhay in the mouth." Pulse reports a source to have said

In a video that has since gone viral, Barry Jhay is seen with a bloodied mouth as he revealed bitterly that he was beaten to that state by his label boss, Kashy.

"See the way this guy beat me," he said in Pidgin English. "I didn't do anything, I was recording. I'm done with Kash Nation," he also said.

Not long after the video went viral, the shocking news of Kashy's death was announced. As such, Barry Jhay was summarily picked up as he was believed to have a hand in Kashy's death.

Earlier today, all the charges filed against Barry Jhay were dropped after the Ghanaian authorities completed their investigations.

The singer has now shared on social media how he almost lost his life and freedom over an incident he knew nothing about.

According to Barry Jhay, the past few days have been life-altering for him as what was supposed to be a vacation turned into a tragic nightmare.

He further mourned the death of Kashy whom he described as a dear friend. The singer also shared CCTV footage from the night in question which showed the moment Kashy dropped to his death.

These past few days have been drastically life-changing for me with resounding frame of reflections. What was meant to be a vacation with my friend/brother turned into a tragic nightmare I almost didn’t wake up from.

What I went through I wouldn’t wish on my worst enemy but I still thank God for his grace upon my life and for also reminding me that there is a thin line between life and death and we’re not going to be here forever.

I lost a dear friend, I almost lost my life and my freedom for something I had no hand in. I know I owe my fans my own side of the story and same is contained in the attached reports.

I want to thank the entire Ghana police force for their professionalism and diligence. The hurtful comments, assumptions and allegations made against me was nothing compared to having to mourn the tragic death of my friend and at the same time been accused of been involved in his death.

But for the enormous support from my friends, family and even strangers who supported me without prejudice and proclaimed my innocence were the ones who gave me hope, oh my Ghanaian brothers and sisters! This is my first visit to an amazing country filled with lovely people I have gotten the biggest support from.

"To my family!! I can’t thank you enough! my legal team( Tope Salami and Jerry), Lewis, Martin, Olu, Ike, my Aunty Tosin, the list long o!!!

"Thank you everyone!!! Tell them Barry Back!!''

Earlier today, the report of an investigation carried out by the Ghanaian police, revealed that Barry Jhay was indeed attacked by Kashy. According to the report, the attack occurred shortly after Kashy's girlfriend rushed into a room where Barry Jhay was recording to report that her boyfriend was behaving abnormally.

The police report disclosed that Karshy jumped down from the 4th floor of the hotel they lodged in twelve minutes after Barry Jhay who he reportedly attacked with a knife had fled the scene. It was further learnt that an eyewitness and CCTV footage corroborated the claim.

28-year-old Barry Jhay is the son of late Fuji legend, Sikiru Ayinde Barrister. He rose to prominence following the release of his 2018 hit single, 'Aye'.

Content created and supplied by: nicnews (via Opera News )