Bobrisky had an intimate relationshi

Bobrisky and Oye had a tumultuous breakup, and she has never shied away from dragging his name through the mud at every opportunity.

The young lady hosted a question-and-answer session and did not hold back in exposing the public about Bobrisky's lifestyle and his relationships with males.

Bobrisky had an intimate relationship with popular businessman Mompha, according to Oye, and he never performed any operation as he claimed.

The young lady had a question and answer session on Instagram, and her revelations lit up the internet.

Oye stated that her ex-boss is a true bald man who hides his beards and covers his head with cosmetics like foundation and wigs. She went on to say how much the crossdresser lies, and how his claims of undergoing procedures are complete fabrications.

The crossdresser, according to the Ivorian lady, visits his father, a preacher, every weekend and dares not show up altered.

Bobrisky does not have a female companion, according to Oye, and prefers to be intimate with guys. She even referenced Mompha, a well-known businessman.

The ex-PA revealed that she learned of Bobrisky's relationship with Mompha from him. 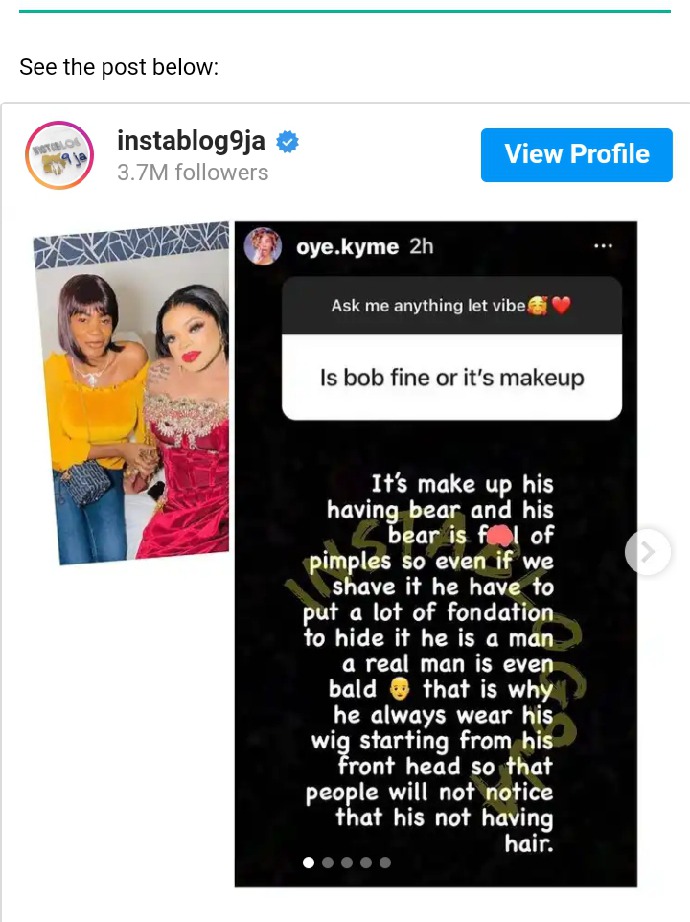 Meanwhile, Bobrisky explains why he hasn't found another PA yet.

According to the controversial male Barbie, he has been hunting for a PA for a year and has been unsuccessful.

The dread of being revealed, according to Bobrisky, has made it impossible for him to find a suitable PA. He stated that he has been able to maintain his superstar status due to his discretion.

Some of Bobrisky's admirers responded to his article by pleading with him to let them apply for the empty position. They stated that they are devoted to one other.