By Ichance (self media writer) | 1 year ago

10 A-Train: if you have watched the TV series " The boys" you would know A-Train the secret to his speed is a serum called Compound V that is able to make him move at significant speeds.

9 Zoom: Hunter zolomon is number 9. Once a very powerful speedster in his prime, zoom went toe to toe with the flash himself and even stole the flash's speed but was later defeated by the Flash himself

8 Dash: son of Mr and Mrs incredible, Dash's powers of speed were genuinely inherited from his super powered parents which puts him number 8 on this list.

7 Reverse-Flash: his battle with flash is a constant one as Eobard Thawne is the only speedster that knows how to manipulate the timeline to his own advantage.

5 Quicksilver: he would definitely rank lower on this list if his character was still alive. His one and only movie, Avengers age of Ultron

4 SAVITAR: the Self proclaimed God of speed himself has been able to achieve a level of speed that has only been portrayed by one other speedster. Even Cisco and Harrison Wells in season 3 of the flash admitted to SAVITARS speed being impossible.

3 Kidflash: being fast runs in the family as Wally west has proven himself by moving at astounding speeds and even leaving Team Flash as a result of the fear of always being under the shadow of Barry.

2 Sonic: the young yet vibrant hedgehog showed remarkable farts of speed when faced against doctor robotnic. He single-handedly emitted a massive power surge that caused a major blackout and his quills contains unlimited energy.

1 The Flash: the feats of this speedster is remarkable, uncountable and incomparable as he has escaped death numerous times and defeated many foes. He is the only speedster that has been able to achieve Flashtime. 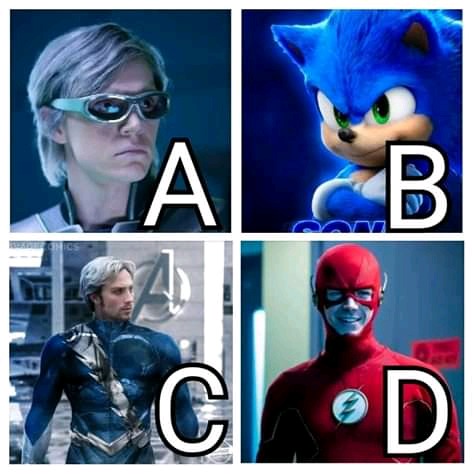 Content created and supplied by: Ichance (via Opera News )