By Charming_Mike (self media writer) | 2 years ago

Nigerian musician, Azeez Fashola, popularly known as Naira Marley has come under intense fire for organizing and performing at a concert that recorded massive attendance in the Federal Capital Territory, Abuja. The event which according to reports was initially planned to be a ‘drive-in’ concert but in the spirit of grooving, fun-seekers violated social distancing and there was quite a large number of people at the venue.

The criticisms laid the whole blamed on Naira Marley but let's look at this squarely before calling for the singer's head. The show wouldn't have happened without the approval of FCT governing body.

Recall that the idea of holding drive-in concerts in Nigeria was entertained by some states governments. This is to allow entertainment industry to still function without violating social distancing rule. The concerts will be for fun seekers who own cars to attend shows without leaving their cars.

The first drive-in concert organized by Lapaizo Lifestyles and Entertainment Group at the Bay Lounge, Admiralty Way, Lekki in Lagos. The Lagos State Environmental Protection Agency (LASEPA) supervised the hosting of a premier and innovative drive-in concert in the State.

The Concert, according to the Agency’s General Manager, Dr. Dolapo Fasawe, was given the green light and adequately supervised for total compliance with all stipulated safety guidelines as the State government begins to ease the COVID-19 pandemic lockdown and safely reinvigorate the entertainment landscape after a long break.

It would seem that FCT officials had seen the success of the drive-in concert and borrowed the idea. They must have given Naira Marley's the license to hold his concert in order to bring alive the entertainment groove in Abuja.

In what should have been a successful premier of first drive-in concert in Abuja, crowd control strategies were not implemented which led to Abuja citizens thronging to the venue. The blame is on them for making the first mistake which is the choice of an entertainer to hold the first drive-in concert. Naira Marlay commands huge following thag has turned into a movement. Logic would have informed them that there would be massive turnout of "Marlians" as they call themselves to the concert.

The second mistake is not putting in place security structures that would have prevented fans from forcing their ways into the venue. They failed in that regard and it is not Naira Marley's fault.

So Nigerians must shift their condemnations and criticisms from Naira Marley to the officials of Abuja council for such a poorly organised concert that led to massive violations of social distancing rule. 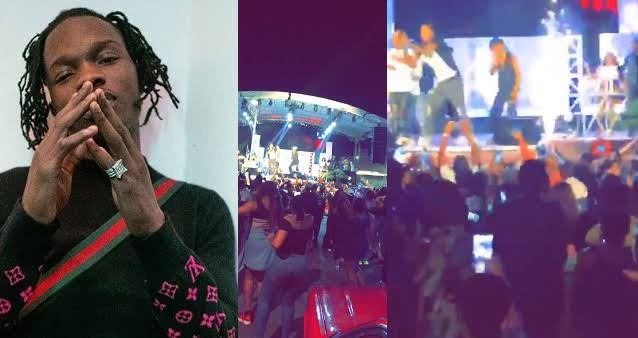