Wizkid is richer than Davido!!

By Officiallymoses (self media writer) | 2 years ago

This two artistes (Davido&Wizkid) has got their fans talking,their so eager to know the richest among the two

So today am gonna clear your thoughts

About Wizkid and Davido David Adedeji Adeleke (born November 21, 1992), who is better known as Davido, is an American-born Nigerian singer, songwriter and record producer.Davido was born in Atlanta, US, and raised in Lagos; he made his music debut as a member of the music group KB International. He studied business administration at Oakwood University before dropping out to make beats and record vocal references. Davido rose to fame after releasing "Dami Duro", the second single from his debut studio album Omo Baba Olowo (2012), from which six additional singles—"Back When", "Ekuro", "Overseas", "All of You", "Gbon Gbon", and "Feel Alright"—were taken. In 2012, Davido won the Next Rated award at The Headies. Between 2013 and 2015, he released the hit singles "Gobe", "One of a Kind", "Skelewu", "Aye", "Tchelete (Goodlife)", "Naughty", "Owo Ni Koko", "The Sound" and "The Money". Davido is one of the biggest artist who has been classified as a rich man. Davido’s net worth is estimated at $16 million dollars. Also, he owns a YouTube channel that attracts over 10 million views. He was born on the 16th of July, 1990 by a Christian mother to a Muslim father and named Ayodeji Ibrahim Balogun.

While growing up and till date, he was fondly called “IB-Boy” by his folks, once popularly known as “Lil Prinz”; he is famously known as Wizkid to the world.

A chorister in the church that grew up in Surulere, listening to King Sunny Ade, Fela Kuti, and Bob Marley songs, these songs have an influence in the songs he sings today.

In 2001, he and some of his friends formed a group called Glorious 5; they released an album before going on different lanes.

Four years before Banky W found him, Wizkid was mentored and coached by Naeto C.

Hard work plus talent made the success door open a little for him as eight years later, he signed a five-year record deal with Empire Mates Entertainment, EME.

His song ‘HOLLA AT YOUR BOY’ brought the 20-year old into the spotlight earning him the ‘Next Rated Award’ at the Headies 2010.

In 2013, he signed an endorsement deal with MTN in May and with Guinness in October.

The year 2015, he was said to have abandoned MTN for a 128 million naira deal with GLO.

As at 2016, Wizkid was no longer a local champion; his collaboration with Drake on the song ‘One Dance’ that became a global hit brought him into a brighter spotlight that lighted his path to the list of top richest musicians in Africa.

The song also earned him entry into the Guinness book of world records 2018 as the first Afro-beats artist.

Wizkid was said to be the first-ever Nigerian musician to have over 1 million followers on Twitter. Wizkid has been rated by Forbes as the fourth richest musician in Africa with a net worth of 8.5 billion Naira.

The young billionaire has got other assets that give his fans a voice when arguing about Wizkid and Davido who is the richest?

But do you think that is all about Wizkid? No.

The Starboy Entertainment Boss also owns a Hyundai sonata that is worth more than $5 million, a BMW X6 worth $11 million, Mercedes 2012 compressor worth over $8 million…

You would think he has had enough of wheels in his garage. The team A, in the “Wizkid and Davido who is the richest” debate, is said to have acquired a Can-amtri-wheel supercharged bike that is worth $7 million. And yes, he also has a private jet.

He also likes acquiring properties. Wizkid’s new house – a mansion in Los Angeles, United State of America, has been estimated to worth $15 million.

He has another house at Lekki that is worth $68 million. He also got a $13 million house in his neighbourhood, Surulere, for his parents. 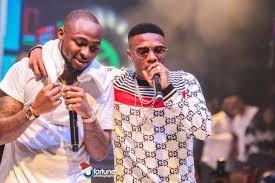 I think I'm able to clear your thoughts with this article

And don't forget to follow me for more gists.

Content created and supplied by: Officiallymoses (via Opera News )