By 6ixMoney (self media writer) | 3 months ago 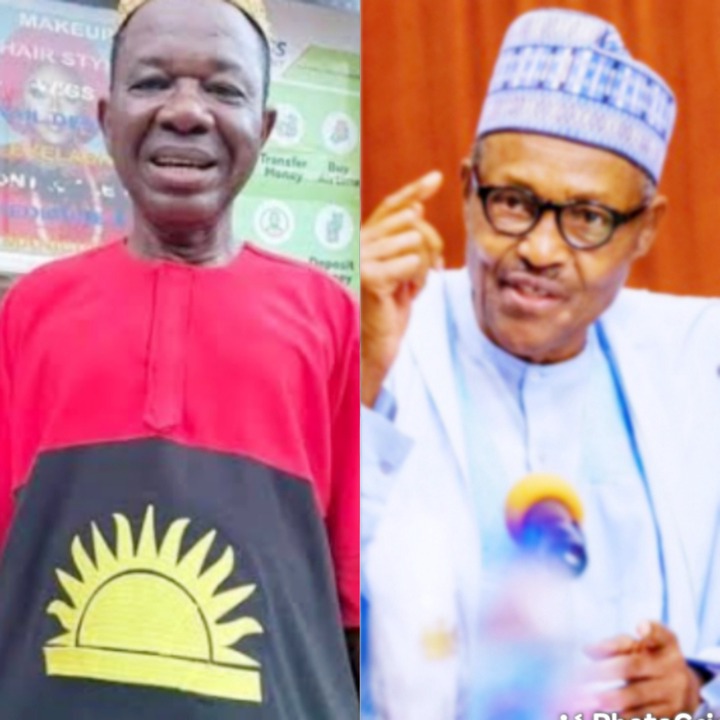 Nigeria Has Nothing For Igbos- Chiwetalu Agu 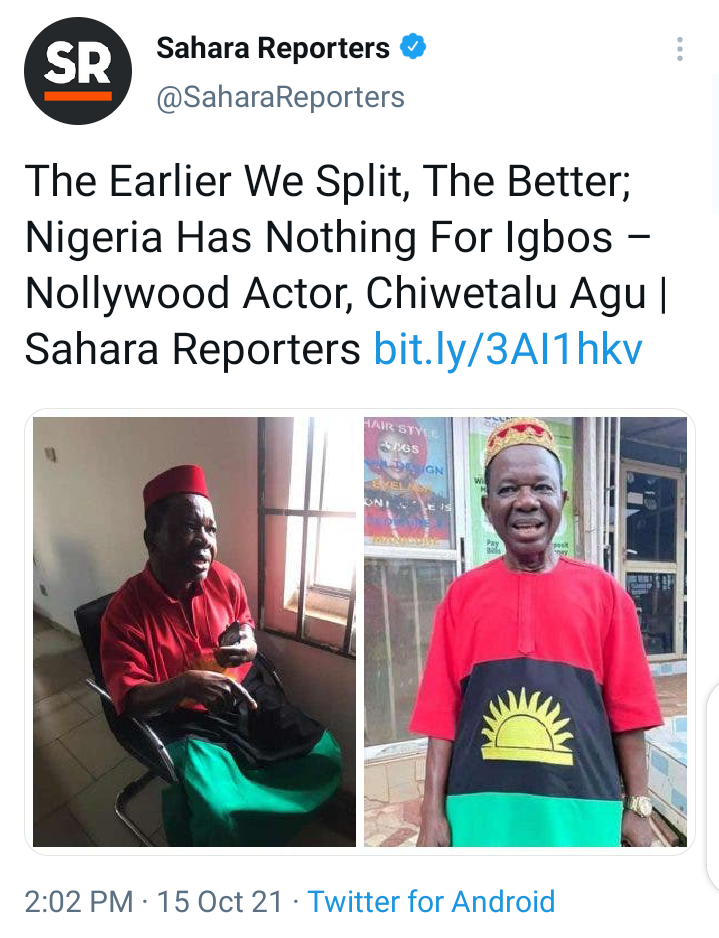 Nollywood actor, Chiwetalu Agu has supported the call for the breakup of Nigeria for peace to reign.

Agu was arrested in Onitsha, Anambra State by soldiers last week for putting on a Biafran outfit and subsequently conveyed to the Nigerian Army headquarters, Enugu.

He was soon released and later rearrested by the secret police who transferred him to Abuja for further interrogations.

Speaking with Broadway TV after his release, the Nollywood actor said he was not beaten up when he was detained by the Department of State Services (DSS).

According to him, his controversial outfit has no connection to Biafra, the Indigenous People of Biafra (IPOB) or its militant arm, Eastern Security Network (ESN).

The actor said the outfit represents the rising sun, to mean progress from one position to a better one.

However, regarding his views about Nigeria’s unity, Agu said, “We all must rise, I preached that everyone should rise from their position wherever they are with my costume.

“My costume was rising sun, not Biafra, Ojukwu propagated rising sun making it as a symbol for Igbos as they like to progress. If you look at Africa, Igbos are on the top because of their personal effort, not the government. 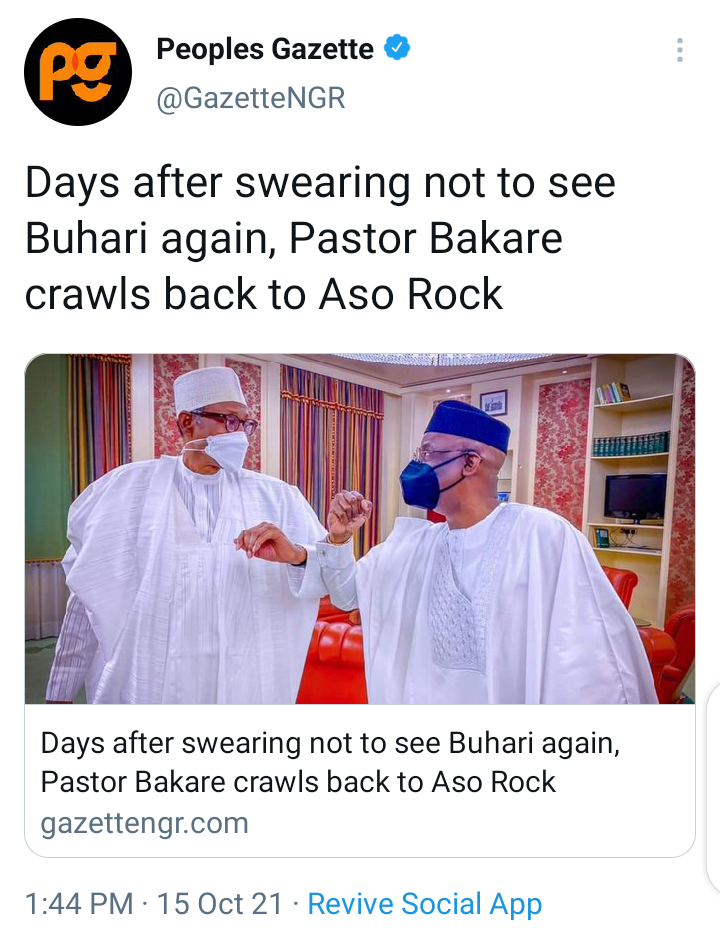 Pastor Tunde Bakare was at the State House on Friday, barely days after vowing not to visit President Muhammadu Buhari again because all his previous meetings with the Nigerian leader had yielded no good results for the Nigerian people.

The senior pastor of Citadel Global Community Church was seen in pictures with the president on Friday afternoon. President spokesman Femi Adesina shared the pictures on Facebook.

The meeting came days after Mr Bakare said he had launched a new movement to find solutions to Nigeria’s crisis, saying he had come to realise that Mr Buhari was not the leader Nigerians anticipated.

Weeks earlier, Mr Bakare, known for his fiery sermons, said he was in a new war with Mr Buhari for his failure to bring peace and economic succour to Nigerians.

“I’m not interested in meeting you any longer; no more visits. Now, it is war because Nigeria must be set free,” Mr Bakare said in his sermon in July 25, recounting how he was instrumental to Mr Buhari’s emergence as president in 2015. 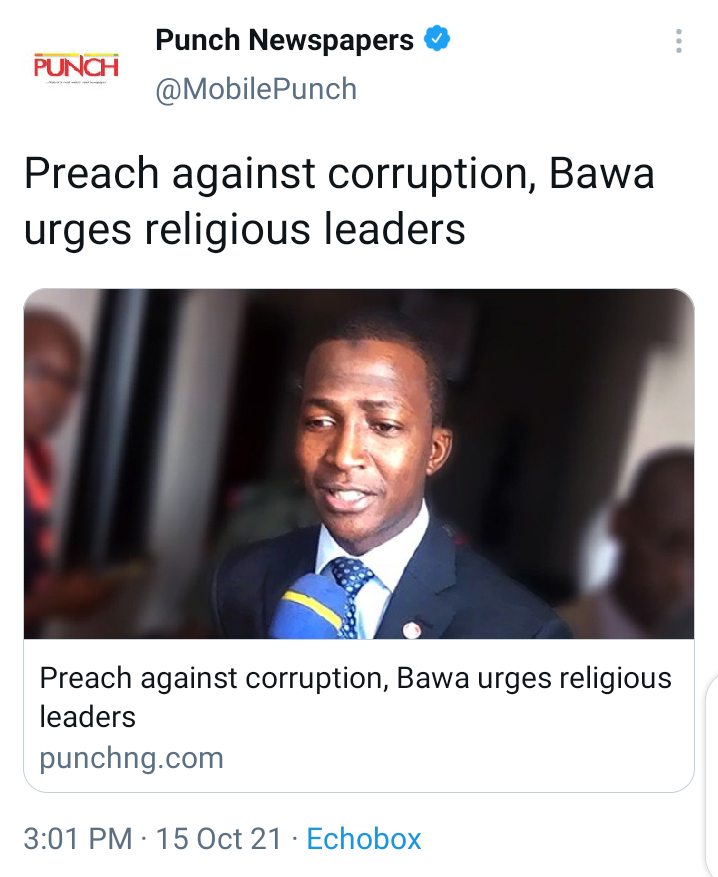 The Executive Chairman of the Economic and Financial Crimes Commission, Abdulrasheed Bawa, has called on religious leaders to preach on the ills of corruption.

He made the call at the public presentation of “Project Eat- Halal and Sermon Guide for Imam/Scholars,” organised by the Just Foundation in Guzape, Abuja.

He was represented by the Head of Creative Communications Unit of the Commission, Deputy Commander of the EFCC, Nwayinma Okeanu.

The anti-graft boss said, “We need to teach our people in the mosques, in the churches the ills of corruption in our society, how it has affected us. I do not read the Qur’an, but I am sure it speaks against corruption, and so does the Bible.”

He said aside from the responsibility of arresting and prosecuting culprits of financial crime, the EFCC is also mandated to prevent economic crimes including corruption. This he says the Commission does by working with faith-based organisations like the Just Foundation.