By OgbeniOlawaleDawodu (self media writer) | 2 years ago 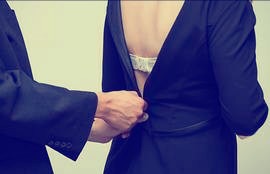 One of those age long Sweet, Romantic, Bonding Gestures enjoyed Couples quickly got labelled as Patriachy by Naija Modern Day Feminists and War of Words Erupted...

Here are some of the responses by Twitter users on the interesting thread stated by Gideon with Twitter handle @DonedeonBeke on what should have been a light romantic banter quickly generated into war of words for equality and supremacy.

"Bro, my wife was wearing dress that zips at the back and zipped it up herself this morning. Women of nowadays don't even respect tradition again ffs! Had to unzip and zip it up myself. Need to teach these new age wives respect for the important things. Smfh."

“Men will not allow women have things their way. Always dictating what they should and should not do. Women should be independent and avoid men like this. If you’re a woman and you think this is cute, you’re encouraging patriarchy. Let 👏🏾 women 👏🏾 zip👏🏾up👏🏾.”

"Very soon, using your wife's picture as avi will be patriarchy, we are approaching that junction. Time will define all these, just time".

"Nigerian men and their misogynistic attitude, once they see a woman winning, they reveal their true self, imagine thinking as a husband you have the right to your wife body and how she wear her cloths?

Poor woman will be thinking its cute, it's slavery girl"

"Madam how is helping you to zip ur dress slavery?

If your husband careless about your dressing how comfortable will you be?"

"Yen yen yen, don't let ur heart explode over a fight that is supposed to be a mere romantic play between couples. Onye feminism."

“The audacity. Marriage doesn’t give license to treat a woman in such manner. He undid her doing to redo it to what end? So he can come online to brag about how his wife can’t zip up by herself? Men should do better.”

This tweet is not about men trying to dominate rather a tweet to promote affection and bond in a relationship.

Yes, women should be independent but let's not forget our relationship that feeds off little gestures."

"I purposely don't zip up when my partner is around..he delights in doing the zip up."

"What if the two of you are fighting and are not talking?"

"Zip-up is enough to end the fight. It's kinda romantic. Only the joyfully married will understand"...

Th war is still on o... EVERYTHING NA FIGHT FOR DIS PEOPLE?!

Content created and supplied by: OgbeniOlawaleDawodu (via Opera News )