"Odumeje Said He Has Never Met Her Before, How Come These Pictures?" Someone Asks (Photos)

By OhAfriculture (self meida writer) | 29 days

Pastor Chukwuemeka Odumeje, Indaboski Bahose as fondly called, is an Anambra-based controversial prophet whose video of his refusal to forgive the sick comedienne, Ada Jesus has gone viral, over an allegation that the latter alleged him of staging a fake miracle with Rita Edochie. The controversial prophet also claimed of not knowing, having discussion or being connected to the comedienne in either way, has only made people to dig up old photos that both the prophet and the sick comedienne took together which has caused a stir online, as they attacked prophet Odumeje for lying that he didn't know the comedienne before. 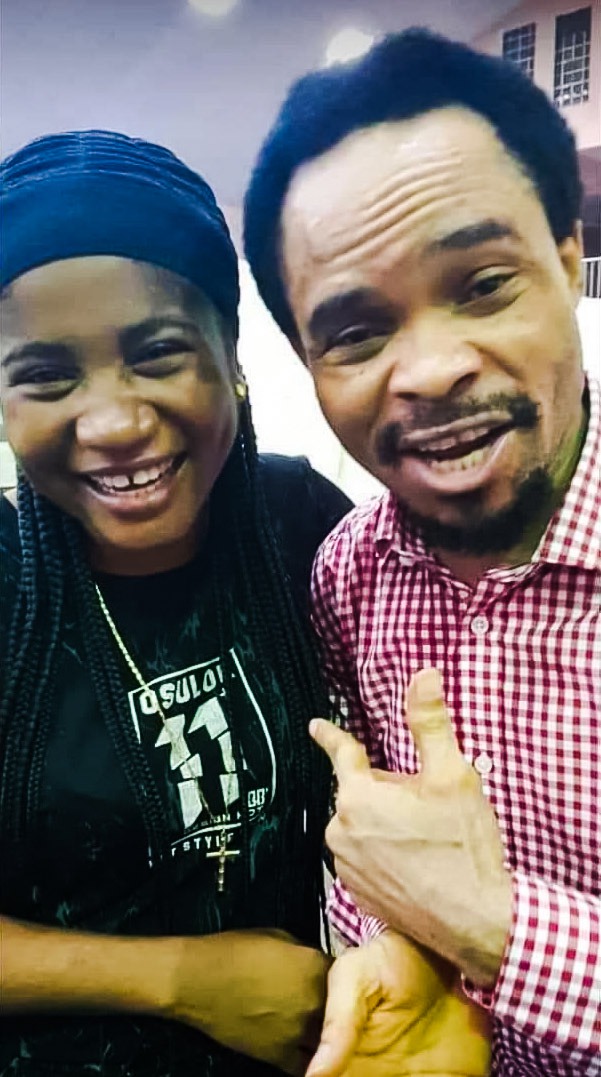 The comedienne, Ada Jesus, was a serious critic of Pastor Odumeje before she fell sick. At a time, she alleged that prophet was staging fake miracles and that prophet Odumeje only connived with Rita Edochie to deceive the people. 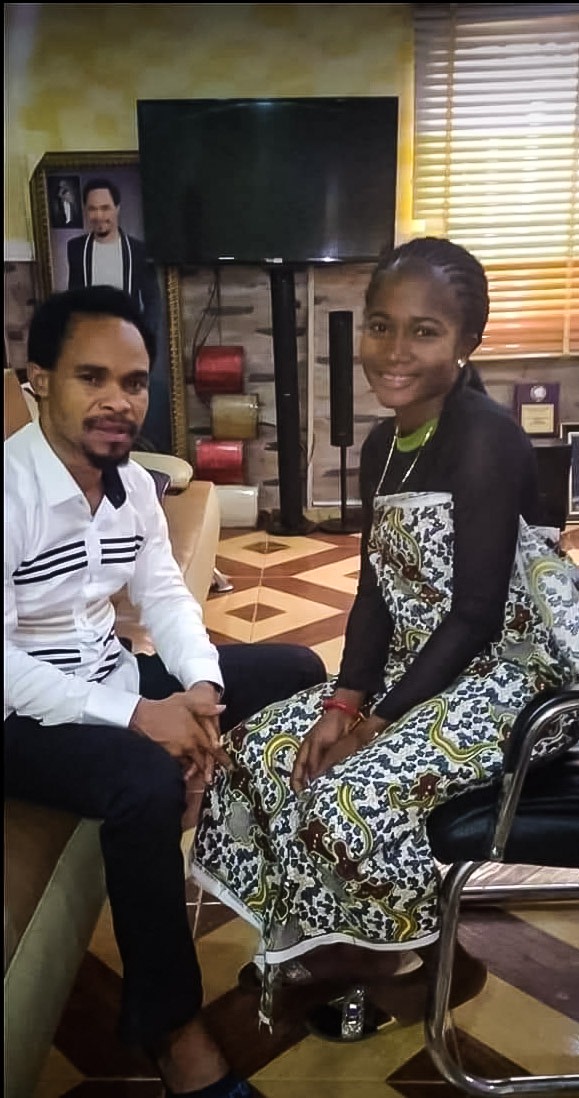 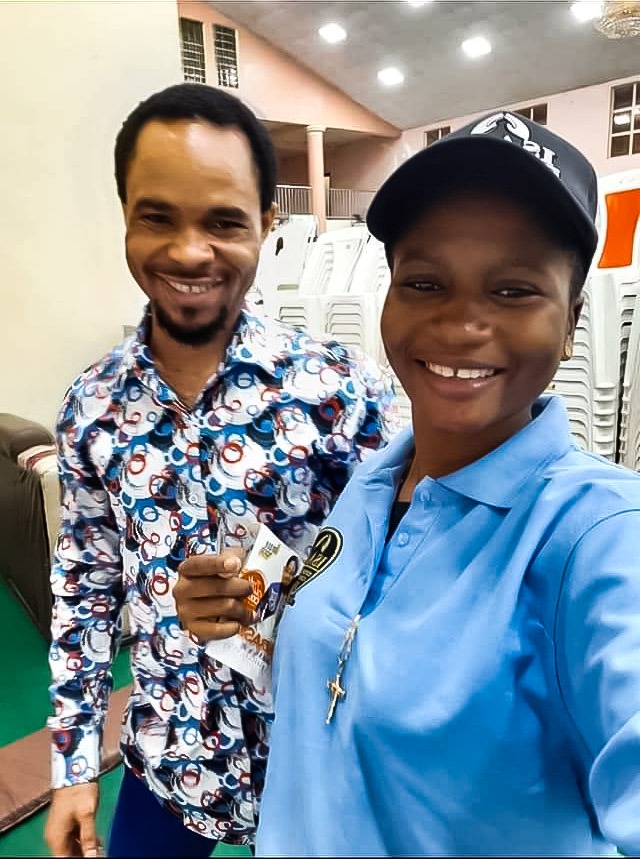 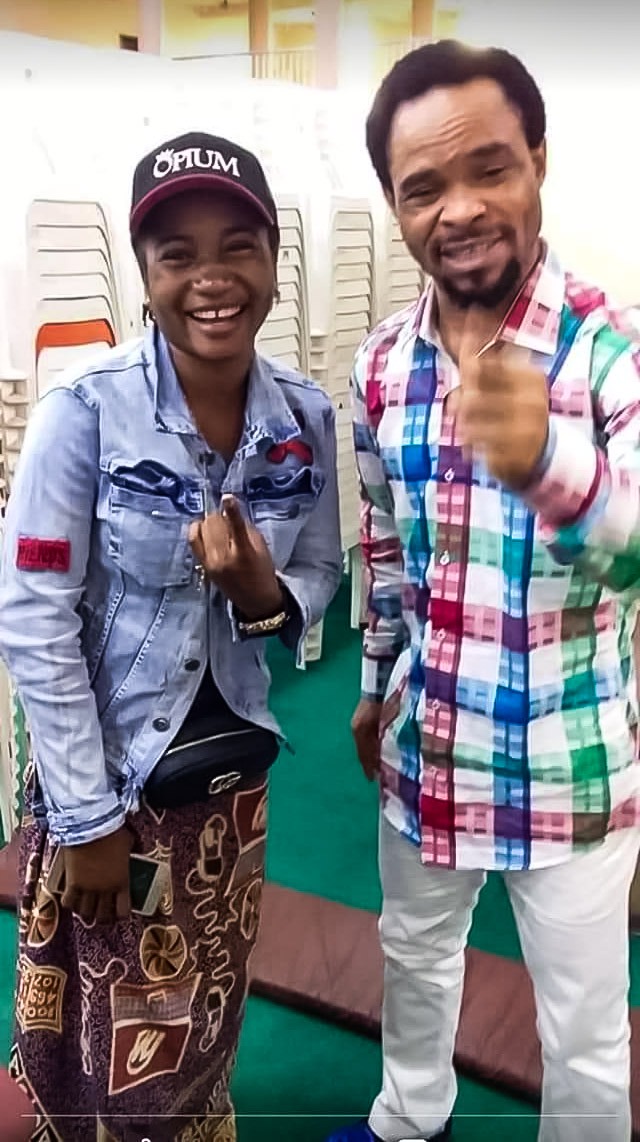 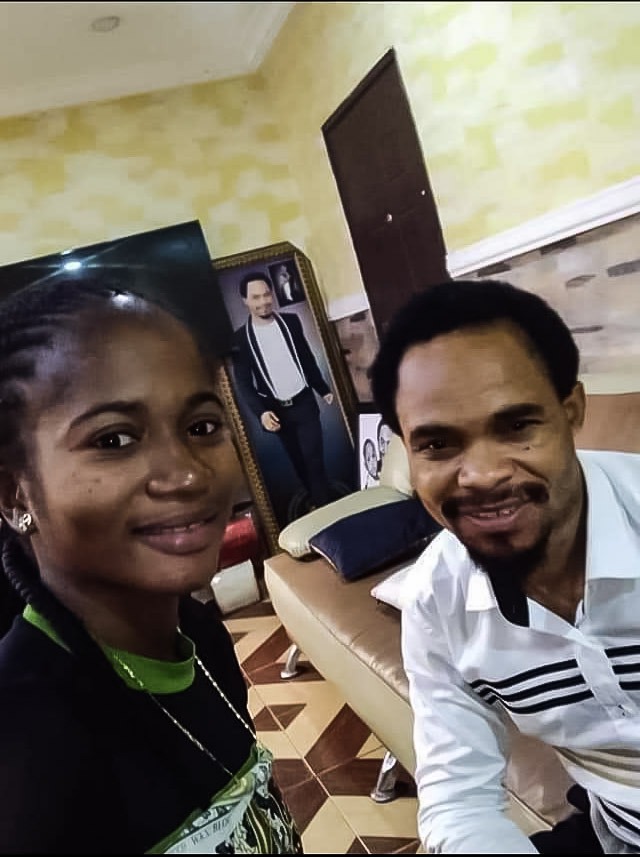 Some days back, Ada Jesus was brought in a helpless situation; she couldn't walk and talk to Pastor Chukwuemeka Odumeje's church, and he vehemently refused to forgive her, owning to the fact that she had once soiled his name. In the video, Pastor Chukwuemeka Odumeje said the following; "Where did I know this lady? What connection for one day, I have never had any discussion with you?" The aforementioned were some words that came out of the mouth of the controversial prophet. 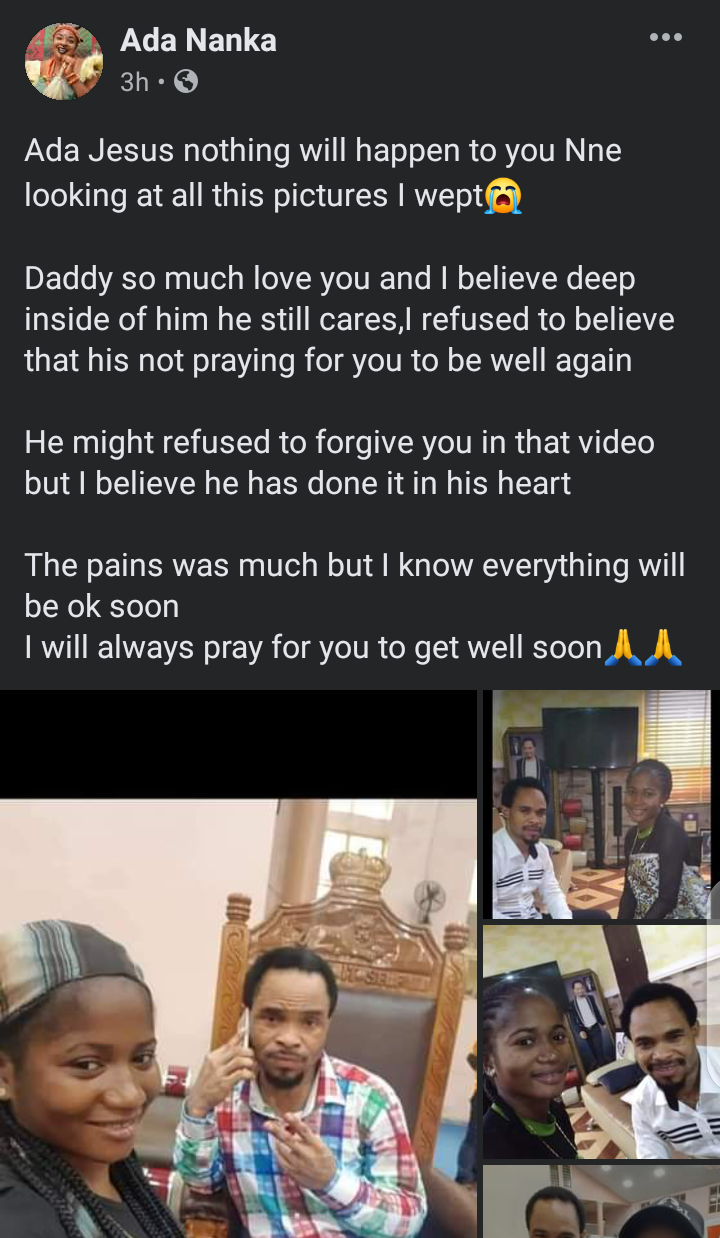 Meanwhile, Ada Nanka in her post today on Facebook, prayed for the sick comedienne and also eulogized the controversial prophet, that aside from the viral video that the prophet declined forgiveness, she knew deep down the prophet's heart that he had already forgiven her. Below her post were photos of the controversial Pastor and the comedienne when the friendship between was strong. 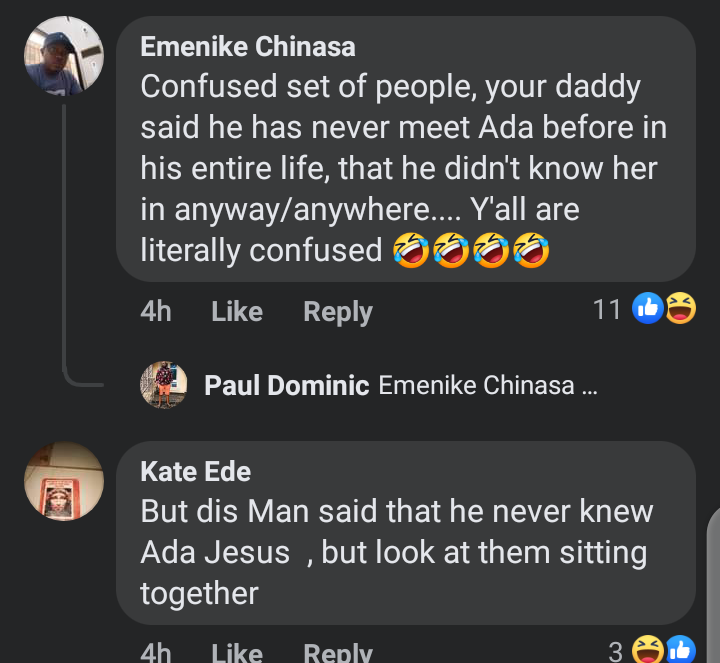 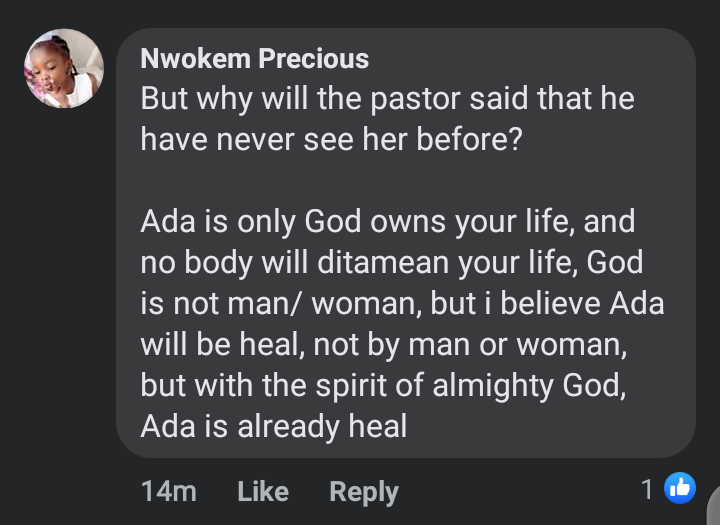 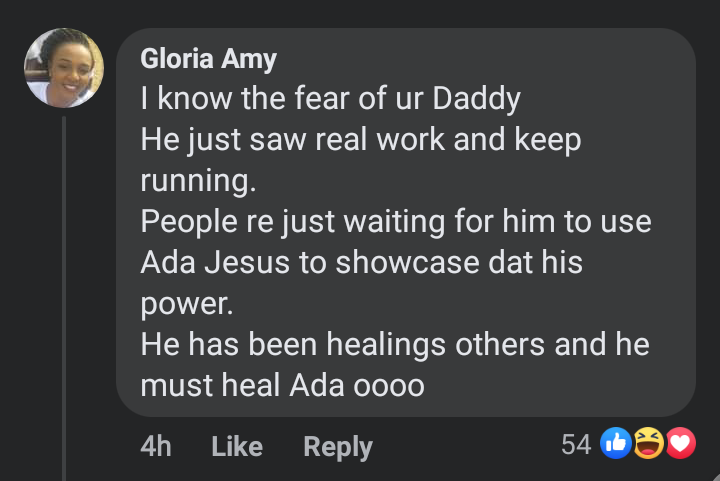 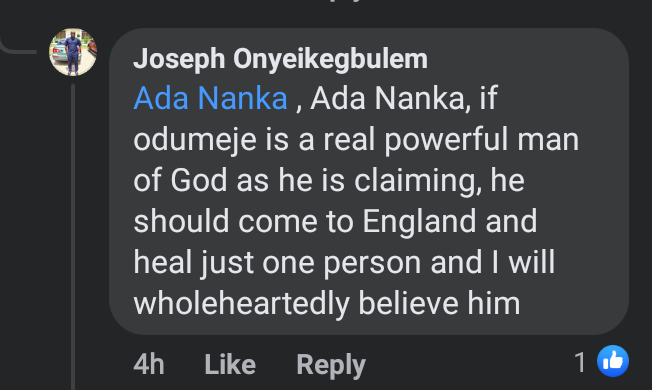 Ada Nanka's post on Facebook was greeted with mixed reactions from people as that attacked the prophet for lying that he has never met with the sick comedienne before while some were of the opinion that his refusal to forgive the comedienne was a ploy to escape from being forced to heal her. 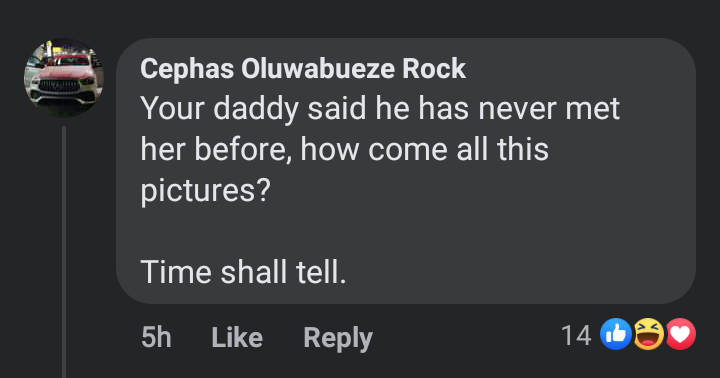 According to Cephas Oluwabueze Rock, who wrote that the controversial prophet denied ever met with the comedienne, but the surfaced online photos of the two of them together have proven otherwise. 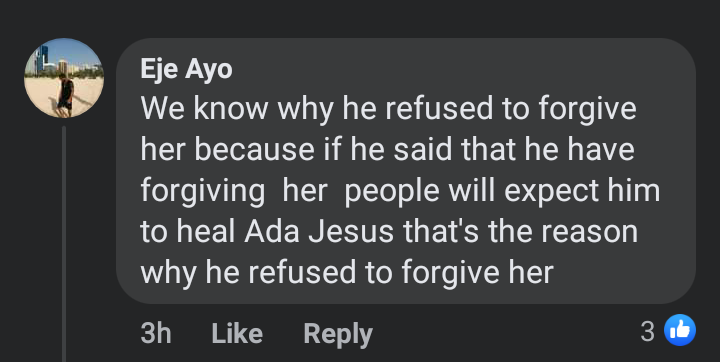 A lady with the name Eje Ayo, wrote that the refusal of the controversial prophet to forgive Ada Jesus was understandable because he knew that if he should forgive her, there would be many expectations for him to heal her.

It can be recalled that even Chi Marine Temple that was equally abused by Ada Jesus had forgiven her, and he also said he expected that as a Christian, Pastor Chukwuemeka Odumeje should have forgiven Ada Jesus.

What do you have to say about this issue? If truly, Jesus Christ is the perfect example Christians follow, why is prophet Odumeje finding it difficult to forgive the comedienne?

Reactions As Naira Marley Rejoices, Prays For Muslims As They Set To Celebrate Eid-L-Fitr

He sponsored many killings in Imo state, escaped arrest on May 4th but was later arrested in Aba

Here Are 2 Obvious Signs That A Girl Really Likes You