By Zeddzul (self media writer) | 2 years ago 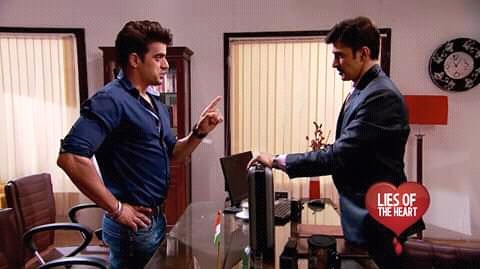 Tani's rash behaviour has resulted into many people questioning the nature of the marriage, Damini proposes that since all is done, they should just get ahead and accept the marriage, and throw in a joint reception.

Just then, samrat, who is enjoying the drama, comes down pretending to be talking on the phone, and horrifed that the news of their marriage is on TV. They all watch and are shocked. Anirudh is super angry. But they have no option but to relent. Samrat meanwhile talks to the waiter of the hotel, who is getting all the work done for him, and promises to pay him off soon

All lament on Urmi's unending problems with samrat, and how Urmi and Shaurya are deeply affected by Samrat's return. Devi asks them to concentrate now on the reception. They are all tensed.

lshaan is super frustrated as anirudh throws a joined doble reception along with samrat and tani, as guests starts pouring in. Urmi calms him down saying that they need to put a polite and sweety face for the sake of society and can discuss it when they get home. Tani and Ishaan get up to mingle with guests.

Urmi keeps sitting stoical and stern, as samrat leaves no stone unturned in amusingly. Taunting her, and then warns her, as an ex-loyal husband, that if she doesn't buckle up soon, she would be reduced to nothing, and it would be a disaster for guarantee. He reminds what happened at the Munh

Dikhayi, and that its just a trailer, as he would have to repay her back, for all that she did to him, along with interest. urmi replies that the day he is exposed, he wont even be able to be anyone's past and asks him to think of his future. He says that he shall rob him of all her respect and self esteem. Tani comes back and tells that her father loves her a lot, to have put up this grand party. Samrat too excitedly says that tani can charm anyone. But inside, he thinks that she is a fool who doesn't know that she is just a pawn for his bigger play.

Anirudh meanwhile introduces his friends to urmi's family. Damini tauntingly asks saroj how she feels to see both of Urmi's husbands together and continues to taunt that Urmi and Samrat are unseparable, and hence maybe god wants their destinies to be entangled together. Sandhya is amused. Dadiji and saroj are extremely unconfortable, as they comment that their children got second hand counter parts. Dadiji tries to prove that ishaan is meant for Urmi, but they keep being insulted with snide comments.

Meanwhile, on the stage, Friends taunt tani for this eloping marriage. As tani and others banter, ishaan and urmi are tensed. They ask samrat of his profession, and tani comes in for his defense saying that he doesnt need to, as he can easily handle the vast business of his father. Urmi and Ishaan smirk at samrat's uncomfortable demeanour. They start taunting Samrat at his living off his wife's expenses. Tani shuts them off, and the friends leave. Urmi snidely looks at Samrat, who's frustrated.

Later, Anirudh asks Tani and Ishan to come along to be introduced to his special friend. Samrat rushes to go along with them. But anirudh asks him to stay where he is, as he isnt talking to him. They are taken along. Samrat fumes saying that very soon things shall change. He then narrates everything to Tani, who says that they are boring people as it is, and then cheers him saying that he neednt be bored.

She turns him off too. he fumingly eyes Urmi chatting with all his business partners. Then he tells about his Kulguru, whose blessings would make a success out of their marriage. Urmi is excited to meet him. Samrat fumes silently. he thinks that Urmi is getting a lot of attention. Urmi sits beside him and tells Samrat that respect isn't begotten for granted, and that it has to be earned, which is beyond his capabilities.

Samrat fumes irritably, while Urmi smirks. When the photoshoot begins, Samrat insistently asks for a pic of both the couples, and Ishaan leaves the stage enraged and angry. Urmi is tensed. The waiter comes with juice, and after giving it to Samrat and Tani, Urmi, who denies. Samrat instigates her, and she drinks. Samrat smiles evilly.

He presents it to the kulguru and is greeted with much reverence and respect. Samrat says excitedly to Tani that he believes in such stuff. He sits down. Anirudh gives him a glass of juice, apraise congratulates them of the son's marriage. Samrat comes in saying that he should also get blessings too. He says that nothing precedes over love and blessings and begins to praise him. Samrat asks Tani to come too. She complies. They both take his blessings together. Anu is mortified as questions arise on how his daughter got married too.

Samrat continues to praise Kulguru, and then asks Ishaan to come along with urmi, to take blessings, as both the couples should get blessings. But Urmi is nowhere to be seen. Tani too tells that Urmi isn't there. Suddenly, they find that Urmi is dancing incoherently, completely inebriated. All are shocked. people start commenting and the kulguru is completely mortified. Samrat doesn't leave any stone unturned to instigate kulguru all the more. the kulguru is enraged.

Samrat leaves from there. Ishaan grabs hold of Urmi, askingwhats she doing, as people are watching. She keeps demanding for another glass of juice. The waiter is angrily sent off by Ishaan. Urmi completely doses off, and he carries her. Damini overhears Samrat saying that what he feared has happened, as she cant bear anyone's happiness but herself. Damini is tensed.

The kulguru reprimands anirudh for bringing a bahu like this, and asks what got into him to do something like this. He listens silently with his head hung low. all are shocked and tensed. Damini places the blame on Ishaan and anirudh. Anirudh takes the blame for bringing a wife like this for Ishaan. Samrat smiles evilly. But sandhya's husband says that from what he knows, Urmi isn't like this. Tani asks why he favours Urmi so much.

Samrat too dismisses his statement, and then tries to instigate them bringing out that she was completely inebriated. Samrat continues to emotionally hurt them, while the kulguru says that anirudh has wronged greatly. Just then, Ishaan comes with the waiter saying that its all his fault, and asks him to say the complete truth. All are surprised and boggled.

All are shocked and deeply tensed as to how urmi could do this. gaurav says that definitely Samrat is behind this, and he must have tampered or done something. Saroj is tensed for Urmi, as shaurya too hasnt recovered, and wonders what they shall answer him, when he wishes to go there. She wonders what all would samrat do.

Shaurya comes out saying that he wont insist and says that he knows whats going on and asks them not to take his tension. Saroj hugs him and asks him to go and sleep, and escorts him too. Asha goes to gaurav asking if he can come along to sleep, but he snubs her off. Asha leaves, while he is enraged.

Anirudh asks why is the waiter here. Ishaan tells them all that the waiter deliberately mixed up Urmi's juice with alcohol. All are surprised. Samrat hopes that he doesn't give his name away. Ishaan says that he just now admitted. All are shocked. Anirudh angrily asks him to spill the name of the person, who made him do this. Samrat takes him aside, in the means of getting it out and then blackmails him.

He falls prey and says that it was justa mistake. Ishaan says that he had full faith on urmi and hence knew something was wrong. anirudh says that even he couldnt believe. He asks the kulguru to have faith. Sandhya says that urmi's luck is good. The screen freezes on Samrat's relieved face.

Thanks for reading. Kindly share to other Zee World lovers. Follow my page for more daily updates.

Content created and supplied by: Zeddzul (via Opera News )