Superhero Couples: Which is your favourite?

By Emmanuelosaz (self media writer) | 1 year ago

Seeing two people or characters fall in love is a beautiful thing and over the years, we've seen comic book couples make their way to the big screen. We've seen the likes of Superman and Lois Lane, Michelle Jones and Peter Parker(Spiderman), Batman and Catwoman, Iron man and Pepper, etc. While some are liked by fans, others are just not supported at all. So here are some superhero couples that we've seen in the movies. 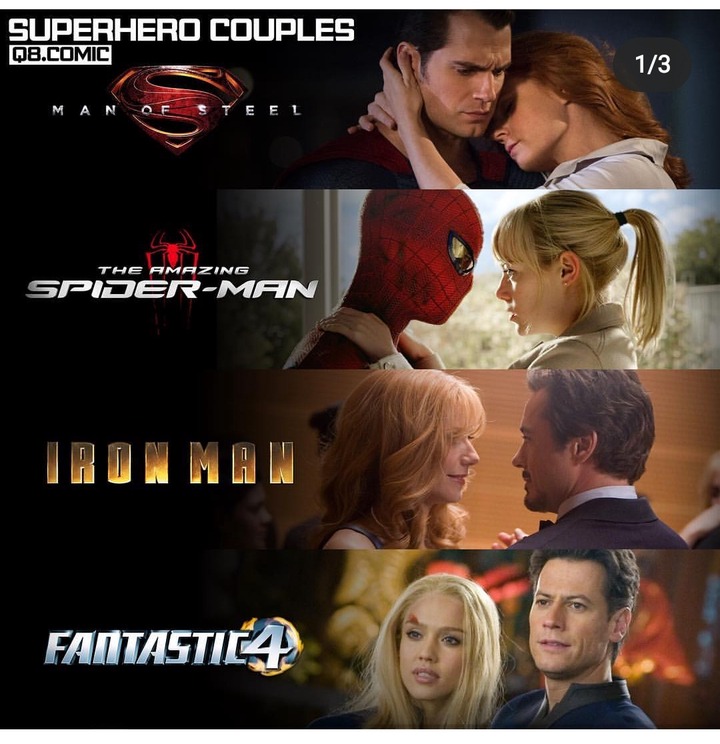 In "Man of Steel", we saw Henry Cavill portray the role of Superman. Even though some fans don't like the movie, I'm pretty sure everyone loved seeing Superman and Lois Lane together. It's such a perfect pairing; an alien bestowed immeasurable abilities, struggling to adapt to his new surroundings and a tough headed reporter who seems to have most of his answers. It's such a nice relationship. Though, I'm kinda rooting for Superman to be with Wonder woman in future DCEU movies, lol. The Amazing Spiderman pair of Gwen Stacy and Spiderman was alright. The only issues I had with it was that Gwen was always portrayed as a damsel in distress which didn't help her story because she died in the end. Sad.

Iron Man's relationship with Pepper is the longest on this list. For a secretary to win the heart of a billionaire playboy, we've got to give kudos to Pepper. She played a major role in the change in behaviour of Iron man, who went from being a spoilt, bratty, ambitionless billionaire playboy to a mentor, role model, a smart, understanding and loving father and that's what should happen in a relationship.

The love story between Sue Storm and Mr Fantastic in "Fantastic 4" was okay. I said "okay" because it wasn't really that captivating. 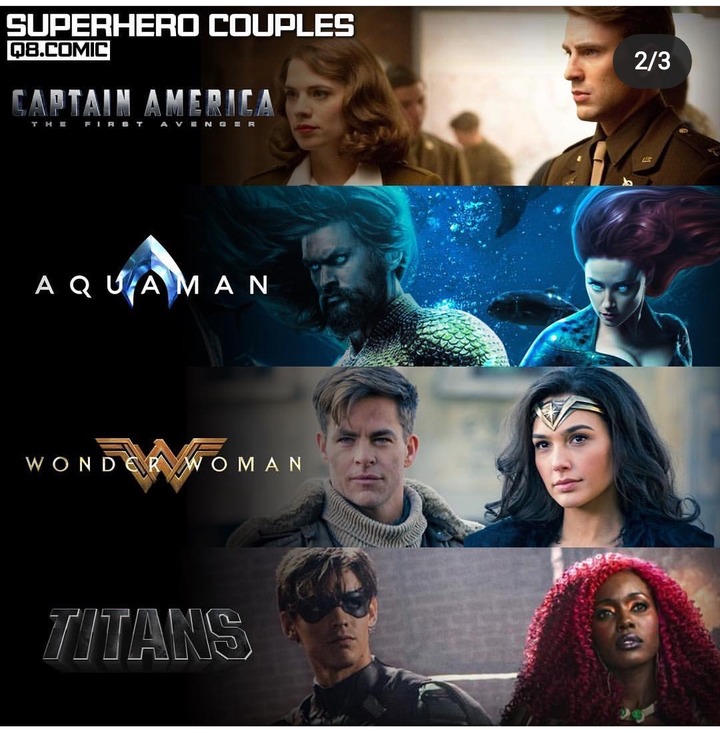 Captain America and Peggy Carter's relationship didn't really get enough screen time. We first saw them together(for a while) in "Captain America:The First Avenger", then didn't get to see them together until Cap went back in time in "Avengers:Endgame" to be with her after defeating Thanos.

Aquaman and Mera have been a couple in the comics but we saw their relationship on TV in "Aquaman", the movie. I totally love this couple. Two badass warriors, a king and a queen, one talks to fishes and the other can control water!!! And they are both adorable characters! What's there not to like?

In Titans, Nightwing and Star Fire's relationship isn't intriguing. I don't like it, maybe it's because the actress playing Star fire isn't that beautiful. Lol.. 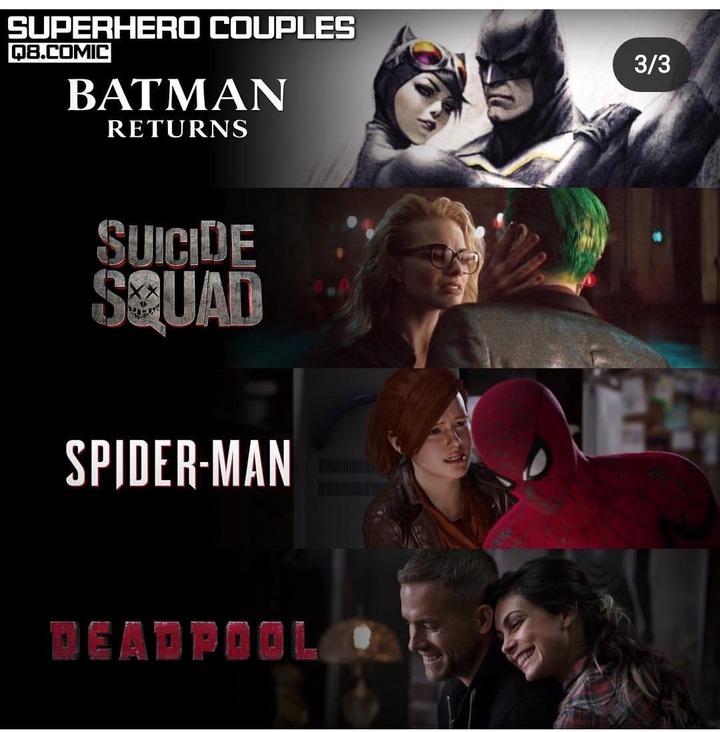 Batman and Catwoman's relationship can be described as a love-hate kind of relationship. They are rivals yet they have feelings for each other. Catwoman's has feelings for Batman but when was the last time Batman felt anything? Lol. But if you've watched "Batman: Hush", you'll see what I meant by love - hate relationship.

Joker and Harley Quinn are two psychos that feel in love with each other. Originally, Harley feel in love with the Joker before she became a psycho. She was his therapist but feel for the Prince of Gotham. Lovely couple!

Looking at the suit Spiderman in the picture, I'll take it as Tom Holland's Spiderman and Zendaya's MJ. Now this is a relationship that I am 100% behind. I have my reasons.

Deadpool's relationship with his girlfriend was nice but she died in part 2,so we didn't get to see much about it.

Everything written here are my opinions. I'm guessing you might and might not agree with me. So let's know which of these Superhero Couples is your favourite.