By Audacious2 (self media writer) | 2 years ago

Love comes in all forms, and so do people's tastes in romantic TV shows. Some people like true romances, some like romcoms, and others like to cry a whole lot. Luckily, you can find all of these in anime sometimes all in one show. (We're looking at you, My Love Story.)

From comedies to tearjerkers, there’s a romantic anime out there for almost everyone. If you’re looking for something to watch on Valentine's Day--or any other day of the year we've put together our favorites and where each of them is available to stream legally. A lot of couples in romance anime take an entire season to get together, but My Love Story’s Takeo and Yamato are not a normal couple. Takeo, the unusual main protagonist, looks like a yakuza boss so not a teenage girl’s typical dream guy but Yamato falls for him immediately. Of course, all of her friends think she’s out of her mind, so the dynamic between the couple and their friends becomes a crucial part of their shared story.

Most importantly, My Love Story explores Takeo and Yamato’s relationship as it grows and develops this isn’t another will they, won’t they romance. It’s consistently delightful and hits all the favorite tropes, too, without overdoing them that means beach, Christmas, and Valentine’s Day episodes! It also has one of the cutest theme songs in recent years, great for watching with that special someone. If you're in the mood for a lighthearted romantic comedy, Nisekoi is still one of our favorites. It follows two high school students, Raku and Chitoge, whose fathers run rival gangs. Raku and Chitoge kind of hate each other but to keep peace between the gangs, their fathers decide that their children have to date, and Raku and Chitoge have to pretend to be boyfriend and girlfriend so all hell doesn't break loose. Of course, Raku has a crush on a different girl, which throws a bit of a wrench in things.

Nisekoi might have some harem DNA, but it's one of the few shows even close to the genre where the protagonist is extremely likable; it's not hard to believe that both Chitoge and Onodera might possibly fall for Raku, who's charming in his own way. And with animation from studio Shaft, Nisekoi has a distinctive style that only makes each heart-fluttering, blush-inducing scene even better. Ryuuji Takasu has a scary face but a gentle soul, while Taiga Aisaka is a tiny but fiery girl who’s always ready for a fight--so much so that she’s known around school as the Palm-Top Tiger. Due to Taiga’s excessive clumsiness, the two end up talking and discover that they have crushes on each other’s best friends. They, of course, decide to wingman each other.

That might sound like a pretty standard rom-com setup, but Toradora is anything but basic. Its relatable, unique characters have fantastic chemistry, and it actually avoids the pitfalls of a lot of romantic comedies. And, without spoiling anything, it has one of the best romance scenes in all of anime.

Your Lie in April Your Lie in April is a heartfelt story about Arima Kousei, a prodigal pianist whose career is derailed by a traumatic event. However, a chance encounter with Kaori Miyazono, a free-spirited violinist, reignites a passion he thought had long faded.

What makes Your Lie in April interesting is, for the most part, it doesn't focus on the romance between Arima and Kaori. Instead it explores their complicated personal issues and uses these to bring them closer in a way that feels natural and authentic.

Arima's destructive relationship with his mother and its lasting impact on his psyche is a dark cloud surrounding him. When his fingers touch ivory keys, the traumatic memories envelop and overcome him to the point where he's unable to hear what he's even playing.

Kaori's infectious energy and tenacious drive to see him fight through the darkness becomes his guiding light. Together, they both learn what music really means to them and, in time, what they mean to each other. Your Lie in April is as much about finding what you love, as it is falling in love.

When high-schooler Chiyo Sakura tries to ask out her crush, he...gives her his autograph. Turns out, the tall, handsome, and oblivious Nozaki-kun is secretly an insanely popular shoujo mangaka (an author of romantic manga aimed at teen girls) and Chiyo accidentally becomes his assistant.

Monthly Girls’ Nozaki-kun explores shoujo tropes with plenty of humor--seriously, this is a comedy first and foremost, and a good one at that. Of course, its cast of lovable dorks is what makes it both funny and heartfelt. You can also definitely rock out to the theme song and learn a little bit about all the work that goes into being a mangaka, all in a short 12-episode run.

His and Her Circumstances His and Her Circumstances, also known as Kare Kano, tells the love story of two seemingly perfect students that are secretly extremely flawed individuals. Yukino Miyazawa thrives on admiration and privately calls herself a queen of vanity. She meets model student Soichiro Arima, who starts to take attention away from her, and is immediately determined to bring him down. Arima finds out her secret and blackmails her, revealing a different side to himself.

They form a friendship and eventual romance. Together they learn to be more comfortable with their true selves and accept who they really are, at least with each other.

The personalities of the offbeat, two-faced main characters and the unique ways they handle their problems sets His and Her Circumstances apart from other shoujo romances. The romance in this anime also feels realistic and authentic. As a warning, the anime does end abruptly, and you’ll have to switch to the Manga to continue the story. But the 26-episode Anime is worth seeking out for the unique, fluctuating animation styles balancing the humor and drama of this character-driven love story.

Clannad: After Story is the sequel to slice-of-life series Clannad, and it begins after Tomoya and Nagisa from the first series have graduated high school. After Story deals with strong family ties and the couple’s individual problems, and if you get through its good but not as good predecessor, you’ll be rewarded with a story that’s sweet, moving, and infamous for making pretty much everyone cry. 5 Centimeters Per Second is a film broken up into three parts, covering the childhood and young adult life of Takaki Tono. As an elementary schooler, he befriends and falls for a girl named Akari. In addition to being about young love, 5 Centimeters Per Second captures the feeling of distance between two people who either don’t connect or cannot, and its animation and direction beautifully capture the melancholy throughout the chapters of Takaki’s life.

Yuri on Ice isn’t technically a romance anime, but it definitely deserves a spot on this list. It follows Japanese figure skater Yuri Katsuki, who has all but lost his passion for skating when he meets his long-time idol, Victor Nikiforov. So yeah, this is a sports anime about figure skaters--but it’s mostly about a mutually beneficial and supportive relationship.

There’s a good deal of guy-on-guy fan service if you’re into that, but the show’s development of Yuri and Victor’s relationship is actually incredibly progressive for anime. Beyond that, Yuri on Ice explores friendship and the familiar quarter-life identity crisis that can cause us to question our paths in life. Plus, there’s some really great skating and a colorful cast of supporting characters that provide a great backdrop to a wonderful relationship. 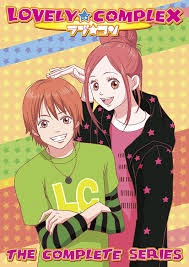 Risa Koizumi is the tallest girl in class. Atsushi Ootani is the shortest boy in class. Between the two of them, there’s a lot of insecurity about their height and how it affects their love lives. Of course, they’re perfect for each other…except for the height thing.

Lovely Complex isn’t currently streaming legally, but it’s worth picking up on DVD for an adorable and funny classic romance anime that takes its time developing its characters and their relationship. Plus, the height problem is incredibly relatable.

Content created and supplied by: Audacious2 (via Opera News )