[Don't Click]- Top 3 Horror Movies In The Order Of There Released Dates.

By Anyi_babaTV (self media writer) | 1 year ago

I'll highlight just 3 have movies, according to their released dates starting from the oldest to the most current. 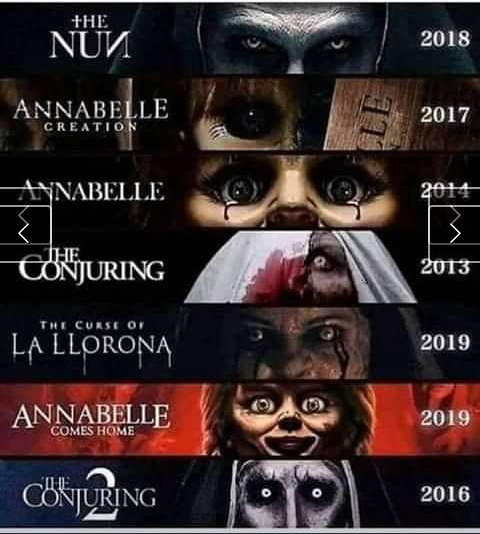 The Conjuring is a 2013 American supernatural horror film directed by James Wan and written by Chad Hayes and Carey W. Hayes. It is the inaugural film in the Conjuring Universe franchise.

Peggy, a single mother of four children, seeks the help of occult investigators Ed and Lorraine Warren when she and her children witness strange, paranormal events in their house.

John and Mia Form are attacked by a Satan worshipping couple, who uses their doll as a conduit to make their life miserable. This unleashes a string of paranormal events in the Forms' residence.

Judy and her babysitter are left alone in her house after her parents leave to investigate a case. However, an unexpected guest sets Annabelle free, unleashing demonic activity in the house.

A priest and a novice arrive in Romania to investigate the death of a young nun. However, things take an ugly turn after they encounter a supernatural force.

*. The curse of La Llorona:

When Patricia is found endangering the lives of her sons, Anna puts her behind bars. However, when Anna's own children are endangered, she suspects that there is more than human involvement at play.

Content created and supplied by: Anyi_babaTV (via Opera News )