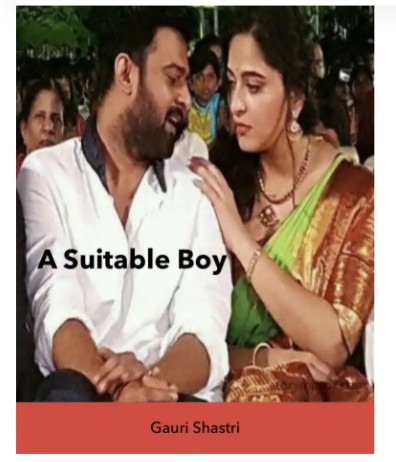 Coming, Ganga » Smriti shouted heaving a large stack of hay in front of her cow.

At least you are happy now, Smriti stroked Ganga’ sback. « You don’t have to get married and settled and do all good things « ... you just have to moo moo here and moo moo there » laughed Smriti remembering her old nursery rhyme Old MacDonald.

But what about me? Appa wants me to get married and settle down. Am I some dust or some stomach ache, that I should settle down?? Enough is enough, every other day Appa shows photos of some or the other morons to me in the hope that I will choose one of them. My good lord Ganga, none of them is even close to being better looking, forget handsome. I don’t want a hero kinda man, even a side hero would also do. Alas!! Appa just sees the size of their purse, that's all. Smriti sighed again. Only you understand my plight, Ganga mooed as if on cue..

Smriti finished the cleaning of her cowshed and came back to her modest house just next to the cowshed.

Smriti lived in a small coastal town of Kumta in the state of Karnataka with her Father and a younger brother. Her mother Sumitra had expired a few years back due to a heart ailment. Her father was an ex- sarpanch of Baggon, a small village in Kumta. They stayed in the ancestral house of Sumitra. It was a three room home, with a separate room as ‘Devara Kone’ or the temple room. There was a huge garden called « Thota » on the right side of the house. It had betel nut trees, areca nut trees, coconut trees and lots of ornamental flower shrubs. The cowshed was to the left of the house. A small well was dug up at the end of the garden.

The family was not so very well to do as Padmakar Bhat, her father had a meagre income from the ‘Thota’ and from whatever was left from the grants received from the government. Padmakar Bhat was lazy and a big time gambler, who used to get in and out of debts all the time.

He considered Smriti as an ace up his sleeve as getting her married to a very wealthy man would provide him enough money to gamble away every now and then.

Smriti was a beautiful girl in her early twenties, with golden-brown eyes and a full head of thick curly hair. Although she clothed herself in modest salwar kameez or sarees, she had curves at the right places. She had just completed her graduation in commerce with a first-class and wanted to pursue a B.ed course. But her father wanted to get her married as soon as possible.

He was always on a lookout for a suitable man for his daughter, even if the man was middle-aged, balding or having any minor physical deformities, as long as he had a fat purse, he was considered suitable by him.

Unlike her father, Smriti was a very hardworking and sincere girl. She had inherited her mother’s looks and loving nature. She had joined the local ‘anganwadi’, as a part time teacher but always wanted to pursue further studies in the field of education, so that she could teach in high school or college too.

Every other day Padmakar would pester her with photos of various men, boys and uncles ( as Smriti called them). She was to choose someone from them. Usually she rolled her eyes, made all kinds of faces and defended her stance fiercely. She was fed up with this behaviour of her father. It saddened her to think of him, she saw all her friends' fathers, they were so loving and caring. She could not remember the last time her father had talked lovingly to her. She had always been a big burden for him, who needed to be married off as soon as possible. According to him the only advantage Smriti had was good looks and a young age. Smriti just hoped that one day her father would love her enough to find her a really suitable boy.

These thoughts in her mind, she went around cleaning the house, cooking and all other daily chores.

Smriti ‘s mobile started ringing, it was her father. Smriti picked up the call on the third ring.

Padmakar yelled, « where had you been? Have you returned from school? «

Smriti : « yes Appa, I was cooking, why are you yelling at me?

Padmakar : « ok, ok, now I am caught up in some work at the Taluka head office, I will return a bit late. One of my friends, Mr. Talgod will visit, See to it that he is taken care of till I return. He is a very wealthy man so offer him some Kesari bhaat. He should not be disappointed.

Smriti was annoyed, she asked » but appa, I havent made any Kesari bhaat, and what is so special about this man?

Padmakar: I don’t want to listen anything, if you haven’t made any Kesari bhaat, make it » I don’t want my friend complaining that he was not treated right while I wasn’t there. Ok!!!

Smriti just muttered an inaudible Ok and cut the line.

She started preparing the sweet her father asked her to make, thinking, « Mr. Talgod, what a funny name!!! She conjured up an image, He must be a balding man with a protruding belly, just like her father, also with protruding teeth.

Smriti looked across the mirror, inflated her belly, curled her upper lip and spoke in a hoarse voice as though acting like Mr Talgod. » haayyyn Smriti putti, how are you?

Smriti laughed at the image and shook her head in amusement.

At the same moment Ganga mooed from her shed as it was time for her feed again. Smriti just switched off the stove and hurried towards the cowshed.

« Coming Ganga, What a timing you have girl!!! I was acting out like actor Omprakash ji, and here you started with your hunger games.... she again stashed the hay in front of her. Smriti further mocked Ganga, » you are becoming a glutton nowadays, have you ever thought about me?? I have guests coming over, old boring types, not a single friend I have, here I was amusing myself and you start ur swan song again ». Ganga nodded her head as if approving. Smriti went on, « don’t just nod your head, Do you know who is coming home today!!! Mr. Talgod Smriti laughed, what a funny surname it is!!!

The Front gate creaked loudly as Smriti looked from the cowshed window. A man entered, as it was nearing dusk, Smriti couldn’t quite make out the face of the man. But by the body language, he seemed to be a young man.

Smriti smiled at Ganga and said, « wahhh ganga, today is our lucky day I guess, Mr. Talgod is here, Thought Mr. Omprakash type will come but this man seems to be like Hrithik Roshan.... Ganga mooed again in agreement.

Smriti exclaimed, « don’t worry, I shall introduce you also to him », let me first see for myself. Again Ganga mooed happily.

Smriti almost ran towards the gate. As the cowshed was a at the back of the house, she stood behind the man and was about to call him when he whirled around.

Smriti was dumbfounded, the stranger was almost six feet in height, he had his aviators perched on his straight nose. He wore a simple collared t-shirt and jeans. Smriti had never seen such a specimen of a man in a long long time. She kept staring at him when he cleared his throat and said aloud, »May I meet Mr. Padmakar Bhat?