"I can't lie, Wizkid really hurt me. Nevertheless he is my bro" Wizkid's producer says. (Reactions) Ace producer, Northboi who helped produce Wizkid's hit singles Soco, Joro and Fever has come out to address his ongoing beef with Wizkid. In a recent tweet by the "Joro" and "Soco" producer, he had emphasized saying Wizkid really hurt him but nevertheless Wizkid is his brother and he prays for the grace to forgive Wizkid.

In his words, "Can't lie. He hurt me, he really hurt me. Some I can't even share but my lawyer knows. Nevertheless, he's my brother. Wizkid is my brother and one of the greatest muscians alive and I pray for the grace to forgive him. AMEN." 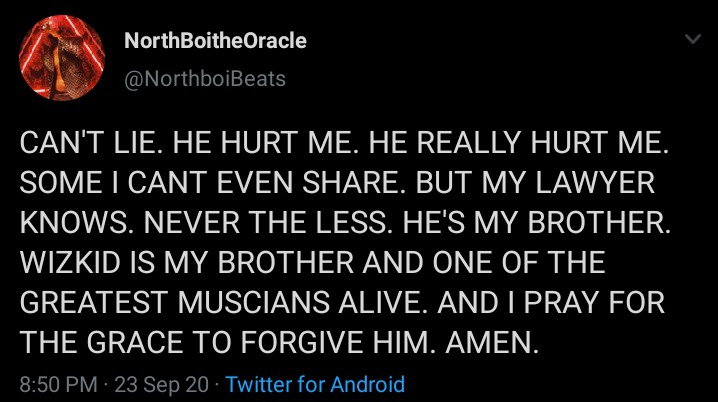 However, see some mixed reactions from fans below:

🗨️Wise men don’t cry for sympathy. You have granted interviews and said demeaning things. You have insulted him and made people insult him well on this app. All those who encouraged you against him, how many of them have made you better offers? Be accountable for your actions.

🗨️I think this guy not being on MIL really got to him. Nobody really knows what happened because Wizkid won't even talk. I miss their chemistry though.

🗨️When producers don't get credits for their intellectual property and creativity. May our labour not end in vain. All this "it's for exposure" or "I brought you to limelight", may it not be our portion, Amen 🙏

🗨️Everything will be cool, bro. I think you need to settle this and get back to him. You need him likewise he also needs you. Go for what gives you living. You might think he hurt you but he might also have the other side of his own view. This is business 👌🏿

🗨️The biggest mistake you made was granting those interviews and everyone who applauded you never liked you. I hope you find peace ✌️

🗨️You've come again with this your drama. Wizkid doesn't need your forgiveness. Know this and know peace.

🗨️Sorry bro but you gotta be strong! You're one of the most talented producers out there. You just gotta put your head up and move on, that would help you bounce back even better.

🗨️Bro, settle this thing in court. Take him to court if he really cheated you. Crying on twitter won't do anything...

You're good, you need to move on. God help you💙

It should be recalled that in 2019, Northboi had called Wizkid out for his reluctance to pay for "Joro" beats and also claiming Wizkid threatened him at gunpoint when confronted about it. Since the time he accused Wizkid of not giving him production credits, both of them haven't been on good terms as Wizkid hasn't worked with him since then. Although, Wizkid has kept silent on the issue, speculations has it that Northboi produced the track with Jamaican star, Damian Marley off Wizkid's upcoming album, "Made in Lagos" scheduled to drop on Oct. 15th, this year.

Northboi was also given production credits on Beyonce's album, "Lion King: The gift" for producing the track titled "Keys to the Kingdom" featuring Tiwa Savage and Mr Eazi.