Why Van Damme and Steven Seagal Hated Each Other

There has been bad blood between Jean-Claude Van Damme and Steven Seagal since like forever – the duo has been accusing each other of lying, disrespect and fight challenges over the years. It is known that former California Governor, Arnold and Sylvester Stallone known as Rambo compete against each other, but in a very healthy way compared to the later duo above. 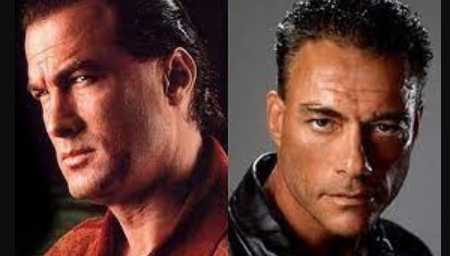 The simmering rivalry between these duos once resulted to a physical fist cuff between the duo in one of the house party Sly held in his house as Van reportedly waited for Steven to come out so as to beat him. Steven sensing Van meant business quietly refused to come outside to face him.

It is known that Steven doesn’t like Van; always accusing him of cheating and lying but the former said he’s surprised he talk’s negative about him when he has not for once did that ever.

During an interview in 1994, Van was asked about his relationship with Steven – he responded with

"Well, he's a good guy, but he's too tense. I saw him in Planet Hollywood and I said, 'Hey, Steven, you speak bad about me on TV. Why?'

After the nearly fist cuff that happened in Rambo house party, Rambo was asked who could have won the fight between the two, he responded with

"Van Damme was too strong. Steven wanted none of it."