Greek Creatures That Are Serpants. 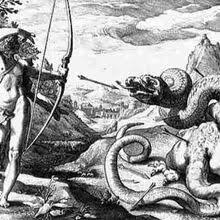 Python was the earth-dragon of Delphi in Greek mythology, and presided at the oracle of the area. At that time, the oracle honoured the Titan goddess Gaea.

According to a source, when Zeus slept with the goddess Leto, impregnating her with the twin gods Artemis and Apollo. However, Hera was so angry at her husband's infidelity that she told Python to hunt Leto, so that she doesn't give birth anywhere that the sun shone. Leto was eventually accepted at the newly formed island of Delos, where she bore her twins. When Apollo grew up, he wanted to take revenge and thus pursued the dragon. Python, chased by Apollo, left Mount Parnassus where he lived and went to the Oracle of Gaea at Delphi. There, Apollo killed the dragon; however, Zeus told him he needed to redeem himself as he had committed such a sacrilegious act. So, Apollo became the founder of the Pythian Games, in order to purify himself. 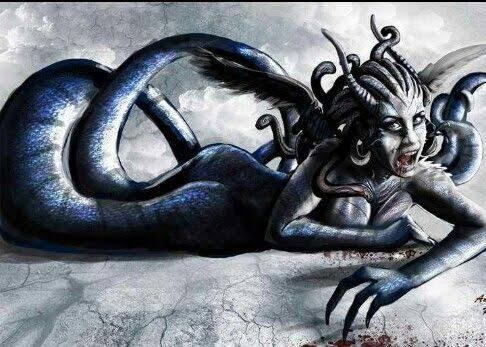 Delphyne is a female dragon in Greek mythology. Her mother was Gaea who gave her the task of guarding the oracle of Delphi. She was often accompanied by a male dragon, either Python or Typhon. Due to the different accounts and sources, she was sometimes mixed with Echidna, the mother of all monsters, who was half woman and half snake. In another source, Delphyne was appointed with guarding the sinews of Zeus, who b stolen by Typhon, and she was eventually slain by Apollo. 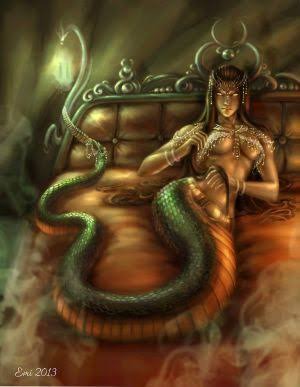 Echidna was a half-woman, half-snake creature in Greek mythology, also known as the "mother of all monsters", as she gave birth to most of the Greek mythical creatures. She was the wife of Typhon, who was the "father of all monsters" and the most fearsome and dangerous monster in said mythology. Both she and her husband were the children of Gaia and Tartarus. The couple attacked the Olympians, but Zeus managed to repel them, burying Typhon under Mount Etna; Echidna and her children were spared to continue challenging future heroes. Echidna was killed by Argus Panoptes while sleeping.

Some of the most famous children of Echidna and Typhon were Cerberus, the three-headed hound who guarded the gates of the Underworld; the Lernaean Hydra, the multi-headed serpent that grew two heads if one was cut off; the Gorgon sisters, the best known being Medusa; and the Chimera, a creature that had the heads of a lion, a goat and snake. 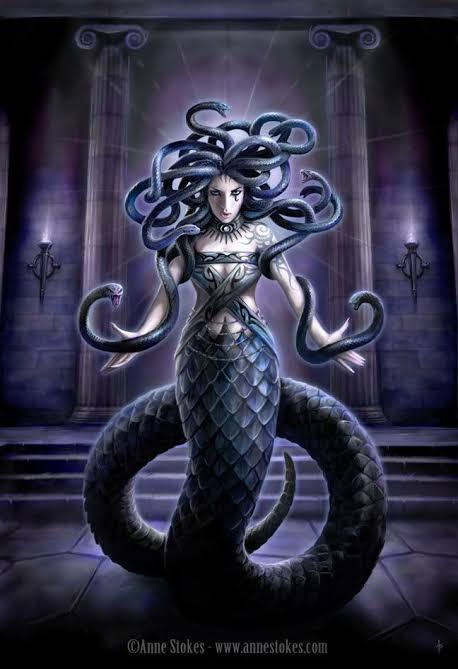 Medusa was a monster, one of the Gorgon sisters and daughter of Phorkys and Keto, the children of Gaea (Earth) and Oceanus (Ocean). She had the face of an ugly woman with snakes instead of hair; anyone who looked into her eyes was immediately turned to stone. Her sisters were Sthenno and Euryale, but Medusa was the only mortal of the three.

She was originally a golden-haired, fair maiden, who, as a priestess of Athena, was devoted to a life of celibacy; however, after being wooed by Poseidon and falling for him, she forgot her vows and married him. For this offence, she was punished by the goddess in a most terrible manner. Each wavy lock of the beautiful hair that had charmed her husband was changed into a venomous snake; her once gentle, love-inspiring eyes turned into blood-shot, furious orbs, which excited fear and disgust in the mind of the onlooker; whilst her former roseate hue and milk-white skin assumed a loathsome greenish tinge.

Seeing herself transformed into such a repulsive creature, Medusa fled her home, never to return. Wandering about, abhorred, dreaded, and shunned by the rest of the world, she turned into a character worthy of her outer appearance. In her despair, she fled to Africa, where, while wandering restlessly from place to place, young snakes dropped from her hair; that is how, according to the ancient Greeks, Africa became a hotbed of venomous reptiles. With the curse of Athena upon her, she turned into stone whomever she gazed upon, till at last, after a life of nameless misery, deliverance came to her in the shape of death, at the hands of Perseus. The Lernaean Hydra was a monster in Greek mythology. It had many heads and every time someone would cut off one of them, two more heads would grow out of the stump. It was one of the offspring of Typhon and Echidna, the father and mother of all monsters respectively. It lived in the lake Lerna in the region of Argolid in the Peloponnese.

Eurystheus, king of Tiryns, sent the demigod Heracles to slay the Lernaean Hydra as the second of the set of labours that the hero had to complete, in order to redeem himself for killing his wife Megara and his children in a fit of madness. When Heracles reached the lake Lerna, he had to cover his nose and mouth with a cloth, in order to protect himself from poisonous gases that were emitted. After he managed to lure the monster out of its lair, Heracles quickly cut one of its heads off, only to realise in despair that two new heads had grown.

So, he decided to ask for the help of his nephew Iolaus, who thought of using fire to cauterise the stump as soon as the head is cut off. So, they made a plan; Heracles would cut off the heads and Iolaus would burn the wound with a firebrand. As a result, they both quickly started winning the battle. Hera, who had raised the monster specifically to kill Heracles, sent a giant crab in aid of the hydra. The hero, though, crushed it under his giant foot. The final head of the Hydra was immortal, and Heracles managed to destroy it by using a golden sword that the goddess Athena had offered him. Then, he dipped all of his arrows into the venomous blood of the hydra. This would later be the hero's demise, as the Shirt of Nessus which Heracles unknowingly wore was covered in the tainted blood, causing him unbearable pain.