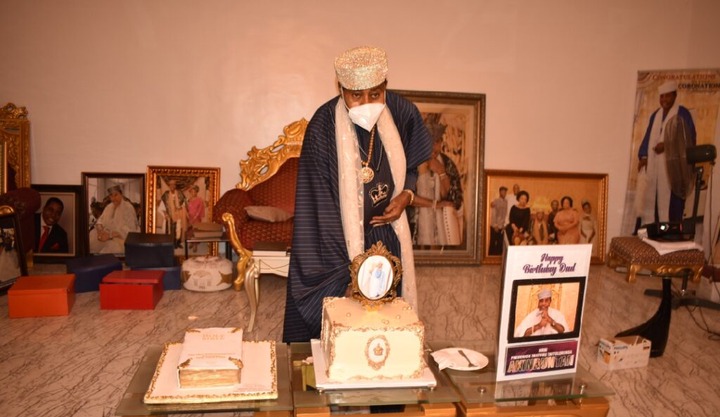 The children of the revered Olugbo of Ugbo Kingdom, Oba Dr. Frederick Akinruntan, both in Nigeria and in the Diaspora have organised a high octane birthday celebration to mark the Royal father’s 70th birthday anniversary.

Managing Director of Obat Groups, Prince Femi Akinruntan, who stood in to represent his siblings at the event made sure the Programme was a pleasant surprise of a birthday bash for their father, the Olugbo of Ugbo Kingdom, Oba Alayeluwa, Dr. Frederick Enitiolorunda Akinruntan. Prince Akinruntan knowing full well that the Paramount ruler of Ugbo Kingdom doesn’t always go public with his birthday, decided to make a difference with this year’s birthday anniversary of the Royal Father as the Olugbo joins the league of Septuagenarians. The Prince of Ugbo who sits atop The Obat Groups conglomerate had arrived Ugbo early on Thursday, the 16th July with a coterie of band boys from his base in Lagos. They arrived Ugbo early enough to be the first caller to see the distinguished Royal father on the morning of his 70th birthday anniversary.

Interestingly, the children, grand children, wives of Olugbo’s sons and other family members in United Kingdom and other part of Europe and those in the United States joined “zoom” to communicate their hearty greetings and birthday wishes to the Royal father.

In his felicitation to Olugbo, his son, who is a member of the Ondo State House of Assembly, Hon. Abayomi Akinruntan (ABA) said his father remains the best Dad in the world, an exemplary patriarch and a successful entrepreneur par excellence, whose noble stride as a Royal father and a business mogul remain enviable by all standard. While noting that he feels proud to have been sired by such a wonderful dad, Hon. Yomi Akinruntan asked God to make Olugbo’s reign long and enduring and to bless him with robust energy and good health as he becomes a Septuagenarian.

There was birthday prayer for the Imperial Majesty and more dancing and celebration followed. A major highlight of the event was the cutting of the expensive birthday cake and the running of an informed documentary on ” Ugbo Kingdom, the Olugbo and the exclusive narrative of the revered place of Ugbomokun in Yoruba dynasty.”

In the documentary, Olugbo reiterated the historically sacrosanct fact that his father Obamakin was the progenitor of Ife and Ile Ife as it is known now was Ugbomokun. He said inviolable and unassailable history established the fact that Ugbo has a central role in the Yoruba narrative as the enclave that expanded and yielded to civilization with the new nomenclature Ile Ife, adding that the Ugbo people emphatically lay claim to Ife as their father, Obamakin’s foothold.

In an exclusive media chat with the celebrant’s son, Prince Femi Akinruntan at the event, the young business mogul described his father as a rare disciplinarian and a dogged and resolute personality who doesn’t brook misdemeanor of any kind from his children, his associates and anyone who identifies with him.

Femi Akinruntan said he and his siblings are grateful to God that against all odds and challenges, their father has by the grace of God arrived the beautiful threshold of 70 years in good health, stressing that the celebration calls for a soiree and fanfare but Kabiesi doesn’t go public with his birthday and the sign of this time doesn’t encourage large gathering, adding however that Oba Akinruntan’s children can’t just allow Kabiesi’s special day to go unnoticed.

Speaking more about his father in the chat, Prince Femi said in ways more than one, Oba Akinruntan has greatly rubbed off on not only him but all of his siblings. He said their father’s life style had thought them steadfastness in the face of life challenges and absolute trust in God’s divine agenda, noting that if God says it will be, all forces of this world put together can not say otherwise.

Asked what he has learnt from his father that keeps him going in the business world, Femi Akinruntan said he had learnt virtually everything from his father , stressing that he watched his father for the upward of 22 years and this provided him the needed tutelage which has stand him in a good stead today, adding that he still reaches out to his father for counsel and wisdom vibes.

Prince Femi Akinruntan on behalf of his siblings and the entire Obat Groups wished the Olugbo of Ugbo more fulfilling years in good health on the throne of his forefathers.