Capaldi Is a Result of a Badly Performed Vasectomy?

By Babywarbuck (self media writer) | 2 years ago

Lewis Capaldi Is a Result of a Badly Performed Vasectomy?

There was recently a very interesting Lewis Capaldi documentary in which the singer said something that many people perceived as weird even for a joke. The singer whose voice is cherished by many people for its clean tone stated that the only reason why he is walking on this planet today is that the vasectomy procedure pursued by his father was botched.

His father actually did not want any more children after having Lewis’s older brother Warren who mentioned that the conception of Lewis was immaculate. Interestingly, Lewis stated that he was growing up knowing perfectly well that he was never accounted for in the plans that his father had for his own future. Nevertheless, he was raised in a good environment.

At some point in the documentary, Warren says that both the father and mother were very sad about the pregnancy.

The short documentary is not a big movie about the singer but a very compact story about his early life and some of his inspirations. For example, he talks about Paige Turley and her works that inspired him to start writing sensual ballads and deal with anxieties that haunted him when he was a teenager. Another source of inspiration that Lewis mentioned is Queen.

Both artistic influences are very much evident in his art and even vocal performances that resemble a lot of what these two artists incorporated in their recordings. 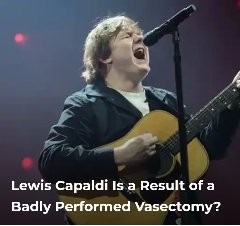 Content created and supplied by: Babywarbuck (via Opera News )