The Life And Conspiracy Behind The Death Of Tupac.

By Samsongizmo (self media writer) | 2 years ago

Tupac is well known and a controversial figure of his time. No wonder after his demise, his legacies and dreams among the black circle still lives on.

He doesn't have a rosy childhood like some thought but he grew up becoming a notable figure among his peers and society at large.

Like his famous saying"A Rose that grew from the concrete"though it comes with scars but it beauty and strength can't be disputed.

He was known for his involvement in the East coast-West coast Hip Hop rivalry in the 90s.

His other names are, Makavelli and Mc network.

He has sold over 75million albums to date, making him one of the top selling artist of all time.

Tupac was gunned down in Las Vegas on September 7 1996 and died six days later.

He has been the mouthpiece of African American with his music and revolutionary style. Always against white supremacist and the ills of being a black man in a white dominated sphere.

His mother Afeni Shakur raised him and his sisters in hard times. They relocated to Baltimore where tupac was enrolled into Baltimore school for the Arts. His mother belongs to a revolutionary group called Black panther party. Tupac's name was changed to Tupac Shakur after an 18th century Peruvian revolutionary leader who was killed by the Spanish.

He got his surname from his younger sister's father, also a panther called Mutulu Shakur.

His mother was born Alice Faye Williams by a North Carolina maid. She got pregnant with Tupac in 1970 while on bail from prison for an act of conspiracy to start a racial war. She was known for her charisma which Tupac inherited.

Changed her name to Afeni Shakur after her activism belonging to the Panther. She died on May 2016 at age 69.

Tupac knew little about his father Billy Garland who left his mother when he was just 5 years of age. He was noted saying "I thought my father was dead all my life" to a writer named Kevin Powell in an interview with Vibe magazine 1996.

He started his stunt in music at Baltimore neighborhood with music videos like "Strictly 4 my niggaz" and the movie "All eyez on me". Also involved in the usual drug peddling for survival.

The family moved to Marin city, California where he actively sold drugs,his mother was also into taking drugs.

At age 17,he got into mainstream music when he met an old lady called Steinberg who introduced him to Atron Gregory. Who later got him into a Hip Hop group called Digital Underground in 1990.

Later moved from dancing with the group to an MC recording his debut in 1991 on "Same song" soundtrack by the comedy "Nothing but trouble".

Atron Gregory was Tupac's manager on his debut album "2pacalypse".

In August 1992 he was attacked by some jealous youths in Marin city where he pulled out a pistol but dropped the gun which was picked by someone else and triggered, killing a 6 year old Qaid Walker.

Death row record company paid compensation to the family of the deceased.

October 1993 he shot two off duty cops in Atlanta but the charges against him were dropped due to the acclaimed threat from the drunk officers. His life was characterized with different criminal charges, ranging from theft, shooting,rape and gangsterism.

Tupac was jailed in 1994 for assaulting his director Allen Hughes for disqualifying him from the movie Menace ll for being disruptive.

THE DEATH OF TUPAC AND BIGGIE RIVALRY

Tupac and Biggie Smalls aka Notorious BIG had a long time rivalry, they were known to be friends but turned enemies.

Pac was shot multiple times at a Manhattan studio, which was said to have been instigated by Biggie Smalls in 1994.

He was charged for rape in 1995 for an incident that happened in 1993 at Parker Meridien Hotel New York, was sentenced to A year and half imprisonment.

He was later released by the boss of Death row record label for $1.3million on the condition of signing to the record label. Which he accepted.

His third solo album was released while in prison in 1995, it's titled "Me against the world"which reached Number 1 on the bill board chart.

Married Keisha Morris in 1995 while in prison, divorced after coming out of prison.

On September 7. 1996, Tupac was in Las Vegas to watch his friend Mike Tyson fight at MGM Grand Hotel, where he was shot 13 times on the hand,pelvis and chest, later died at the hospital.

His gang outlawz said they smoked his cremated body ashes in honor of him.

There has been conspiracy on the whereabouts of the remains. Some still believe Tupac is alive living in Cuba presently... 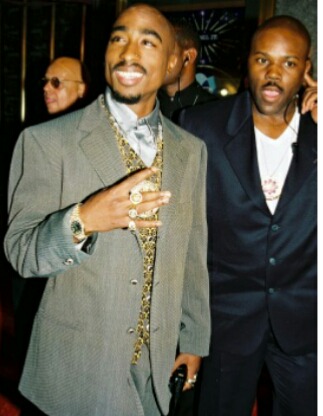 Content created and supplied by: Samsongizmo (via Opera News )