By Blessed-CeeJay (self media writer) | 1 year ago For those of you who are movie fans that just don't watch the movie but try to pick a message from the movies watched. Without further ado, here is a movie i watched during the Covid 19 Lockdown that really touched me and i decided not to keep it to myself but to share it with anyone who cares to indulge in it.

The Platform: (Spanish: El hoyo, transl. The Hole) is a 2019 Spanish science fiction-horror film directed by Galder Gaztelu-Urrutia. The film is set in a large, tower-style "Vertical Self-Management Center". Its residents, who are switched every 30 days between its many floors, are fed via a platform which, initially filled with food at the top floor, gradually descends through the tower's levels, each level getting only the leftovers from the previous ones. It is a system bound to cause conflict, as the residents at the top levels can eat as much as they can, in an allotted time, leaving increasingly little for those below.

The film premiered at the 2019 Toronto International Film Festival, where it won the People's Choice Award for Midnight Madness. At TIFF, the film also secured a worldwide streaming deal with Netflix. It was released on the streaming service on 20 March 2020.

The Message I picked from the movie:

That movie can be applied to the Nigerian Political Situation in this Manner;

The Senior men (The powers that be): In the movie (though it is not clearly) we can assume that there are people in charge of the allocation of levels, they have the authority to place the inmates to their various levels. In the Nigerian situation, these are the major political stakeholders (The Political Godfathers). These are the people that decides who rules and who stays and at most times they determine the allocation of resources and as we can see in the Nigerian situation, they at most time form what is known as the "cabals" and from there they place the food on the platform and then watch each level as they divide the national platform till the lowest level.

Time: The time in the movie is switched every thirty days, in that time (everyday) the food comes from the 1st floor (on that platform) and gradually goes down each floor until it reaches the last floor. For the Nigerian Situation is the 4 years of political office time, in which the resources are passed from that office right down to the grassroots. 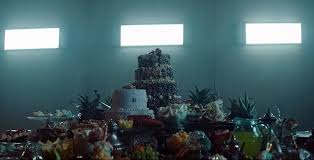 In the Nigerian case can be said to be the resources (Land, Labour, Capital, energy, entrepreneurship, information, expertise, management, time e.t.c), which is supposed to start from the top and then trickle downwards (from the presidential, to states, to the grassroots).

As seen from the movie, those at the top gets as much as they want and even more, and as the food goes down, it dwindles gradually, until it gets to the middle and then, it became a situation of "all man for himself as well as a case of "survival of the fittest". 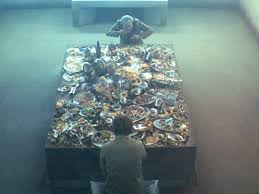 In the movie, there were 333 floors, but as seen from it, the food does not even reach the 120th floor talk less of halfway, then those at the bottom (only see cleaned up plates and spoons), where most kill their roommates to survive the month or gets frustrated that they jump down to their deaths.

It is worthy of note that as that lady (Imoguiri) stated that the food was meant to serve every person on every if every one on each floor only took what they needed (instead of what they wanted), and just as it is in the movie, so it is in the Nigerian situation. Remember in the movie when Goren wanted to talk to those below, Trimagasi admonished him not to do that, "why?" Goreng asked and what did he (Trimagasi) say? Because, "Obviously" they are below, then when he tried to reverse and talk to those above, he realised same thing, because they were above "Obviously".

The first day of the month determines how the rest of the month is going to go as the first thing their eyes go to is the floor number, which determines if food will reach your level or not and you can hardly claw your way up as is seen with that guy with the rope. Same thing is happening in the Nigerian Situation, because the Rich just keep getting richer and keep a chokehold on the resources and as for the leftovers, the the other levels scrambles to get what remains and also passes down their own left overs without care what happens below how it reaches and how they fair in their daily lives.

What does the movie portray

For me, it shows that every person will do the same thing once he reaches a position in any political office (whether as an appointee or elected), and that is to eat as much as i can before my time has elapsed. Some might try to do a good job but "his/her people" will bring a delegation of people and come to request for their own share of the national cake. And if he/she refuses, next thing is "We no go gree".

When he does try his best and gives them that share of the National Cake, those same delegates will gather together and divide it, leaving scraps for the masses and then any infrastructural facilities put in place has substandard qualities without any shelf life because substandard materials were used to create those facilities. Those facilities just lasts as long as (give or take) 2 - 3 years, and then its the same case all over again.

I was going through the reviews of the movie and it was stated that the movie tried to portray the importance of individual initiative training (Sponteaneaous act of solidarity as mentioned by Imoguiri) and also the film critiques both capitalism and socialist systems.

Please stay tuned to my next post as we delve into what i think could be solutions to "The Nigerian Situation" and suggestions are also welcomed as well.

Content created and supplied by: Blessed-CeeJay (via Opera News )