By Id_chest (self meida writer) | 1 months

A Nigerian woman sparked outrage on Twitter after she posted about the Biafran notes she found in her father's house. Tweeps advised her to keep the money even though it was no longer in use because it might be worth more as an artefact. 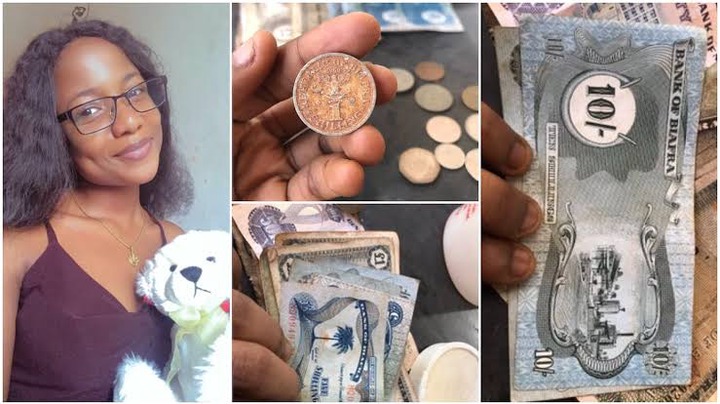 People were astounded, as some told similar stories about discovering very old notes in their grandparents' homes. Chioma, a Nigerian woman, has shared images of old Biafra currencies she discovered in her father's room.

The lady added photos of both notes and cleaned coins used during the country's civil war when she shared the notes. Many people have since responded to the post, with many tweeps reminiscing about their childhood.

Some even reported that their parents, who had witnessed the war, still had their money.

Some Twitter users said that the notes had become antiques and that they should be framed for posterity. The lady also included some old Nigerian currency notes. Kobos and N1 notes were among them. 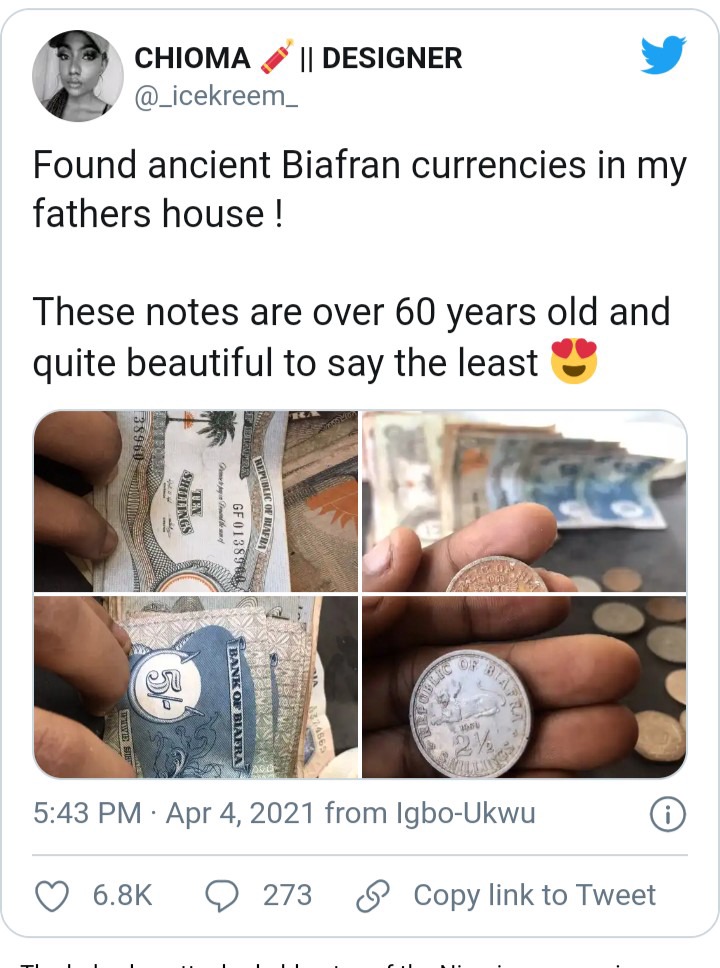 Some of the responses to her post are listed below:

"Would have to go home to look for those coins my father had collected, shillings, pennies, and so on.....he was a young boy at the time, running from one artillery searching salts to fro camps for families.....it was a really sad tale when I told it."

Many people were taken aback by how spotless the notes were. @ icekreem is the source of this picture.

"Am I the only one who is perplexed as to why there is a figure of 2.5 shillings?"

"My father also has some, as well as his Biafran soldier's ID card. I'm also perplexed as to how they manage to keep things so clean and intact for such a long period of time. My university diploma never lasted more than 5 years before it was torn."

"If you want to sell them, please do so. Please give me a DM."

People respond when a young lady says that men should pay their wives to give them children.

"These objects may be extremely valuable in the near future. Keep an eye on them."

Meanwhile, we previously stated that Regina Chukwu, a famous Nigerian movie star, demonstrated that she can be disciplined with her finances in order to reap the benefits later. The actress, who recently entered the ‘My Kolo Challenge' on social media, surprised fans by breaking her piggy bank, which she had been saving money in for several months.

Five Types Of People Who Should Deworm Often

Who Will Make The Top 4? See The Remaining Fixtures For The Teams Who Are Still In The Race

Opinion: 15 Reasons You May Never Get a Man to Commit to You

Family Of The Murdered Jobseeker, Umoren, Picks Date For Her Burial

Naeto C Finally Reacts To Davido's Message, Check Out What He Said

Brighten Your Mood By Viewing These 18 Funny Pictures and Memes

Here Are Some Botanical Facts About Banana